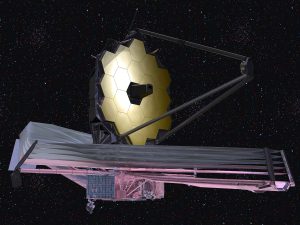 Its sunshield deployed and the mirror unfolded a few days later .

So what is special about this telescope? What will it do?

And what is Wonderdome’s connection with the Webb?

The Webb is an infrared telescope, the successor to the Hubble Space Telescope.

They assembled the telescope at their facility in Rodondo Beach, California.

A European Ariane 5 rocket launched the Webb from the space centre in French Guiana.

The final cost was an astronomical $10 billion.

Infrared passes through interstellar dust and gas much better than visible light so it can detect dim, distant objects much better.

And because of cosmological redshift, infrared telescopes can see further into space and back in time.

The Webb has four main objectives:

It began life as the Next Generation Space Telescope, NGST.

NASA renamed the telescope in 2002 for James Webb, NASA’s boss in the time of the Apollo missions.

Technical and financial problems delayed the project and the plans were reviewed and changed in 2005.

After this, the project was back on course but the launch date was put back to 2017.

The revised design was completed by 2011 and work began on building the instruments.

The components and instruments were ready for testing by 2016.

The telescope was eventually assembled in 2019 and successfully passed the final rigorous tests.

The Webb was shipped from California to French Guiana in 2021.

It was finally starting its journey into space. 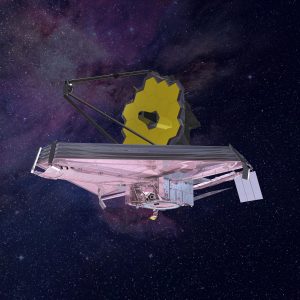 The telescope mirror is 6.5 metres across, compared with Hubble’s 2.4 metres.

It has over five times the light-gathering power of Hubble.

The mirrors are made of beryllium, coated with gold.

Beryllium is a strong, lightweight metal that hold its shape across a range of temperatures.

Gold is efficient in reflecting yellow and red wavelengths of light together with infrared, heat radiation.

Because a single mirror of this size would not fit into any rocket, it is made of 18 hexagonal segments.

The segments were folded together inside the rocket.

Small motors can move the segments slightly so they work as a single mirror.

The mirror collects infrared radiation. It must be very cool to do this.

Its working temperature is -233 C, just 40 degrees above absolute zero.

To keep the optics cold there is a huge sunshade on the sun side of the telescope.

Five layers of polymide film coated with aluminium make up the shade, each sheet thinner than kitchen foil.

Folded 14 times to fit into the rocket, the shield unfolded once in orbit.

Fully deployed, the sunshade is as big as a tennis court.

Below the shade is the spacecraft bus which contains all the computing and communication systems for the mission.

The computers collect and store observing data before transmitting them back to Earth.

They also control the position and attitude of the spacecraft.

Two small rockets maintain the spacecraft in orbit whilst even smaller thrusters keep the Webb pointing the right way. 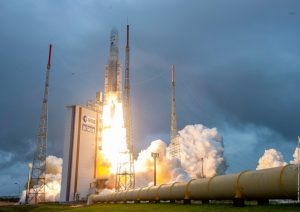 After more delays, the Webb finally launched on Christmas Day, 2021.

A European Arianne  5 rocket took the Webb into space from the space centre in French Guiana. 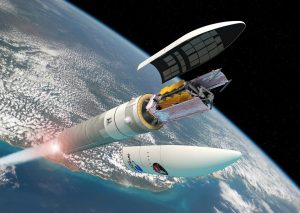 Once safely in space, the sunshield unfolded beneath the mirror.

Ten days later, the segmented mirror unfolded and the Webb was fully deployed.

The Hubble Space Telescope has a regular orbit around 570 km above the Earth.

The Webb will orbit much further away, at a distance of 1.5 million km.

This is at the Lagrange 2 or L2 point, where the pull of the Sun balances the gravity of Earth.

Here the Webb’s sunshade can block heat from the Earth and the Sun at the same time.

The telescope will loop around the L2 point to avoid the shadow of the Earth.

Unlike Hubble, spacecraft cannot service the Webb because of its distant orbit.

The first test images from Webb may come in March but we’ll probably have to wait until June for high resolution images.

Our Wonderdome blog will report when the Webb is fully operational.

And for more information, NASA has an easy-to-read Webb Q & A.

In May 2019, at the National Space Centre, Wonderdome presenters met UK scientists and engineers working on the Webb.

Their instrument is MIRI, the Mid-Infrared Instrument.

We received a full dome video about the Webb Telescope.

If you invite Wonderdome to your school or event, you might ask the presenter to include this sequence.