In April this year, a group of influential scientists spoke to NASA about future planetary space missions.

Their number one recommendation is a spacecraft to visit Uranus.

Their vision is a space probe to go into orbit around Uranus.

It would investigate the planet and take a close look at some of its moons. 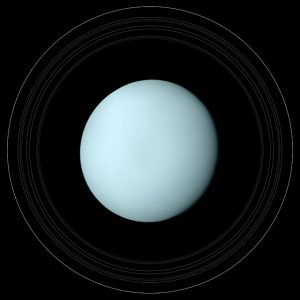 The recommendation is made in a document published by the US National Academies of Sciences, Engineering, and Medicine (NAS).

Known as a “decadal survey”, it summarizes ideas from the American research community.

They look at big planetary science questions and the space missions required to answer them.

The group’s previous recommendations in 2011 included a mission to Mars to return rock samples.

As a result, the Perseverance rover is now on the red planet.

They also suggested a probe to study Jupiter’s moon Europa.

That launch is scheduled for 2024.

So the decadel suggestions do result in action.

The only previous space probe to visit Uranus was Voyager 2 in 1986.

It was a flyby on its way to Neptune and out of the Solar System. 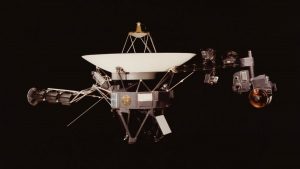 It studied five big moons and discovered eleven others. 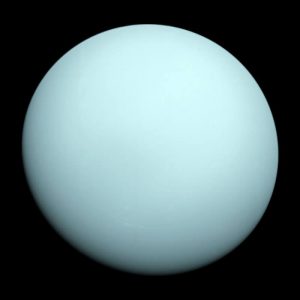 They remain our best views of this distant world and its moons.

Now, says the decadel survey, it is time to plan a return visit.

Now is a good time to plan a mission to Uranus.

In 2031 and 2032, Jupiter will be in the right position to give a spacecraft a ‘gravity slingshot’ on to its target.

Even so, the probe will take 13 years to reach Uranus.

So we may have to wait until the year 2044 to see new close-up images of the seventh planet.

Crucially, it will not be another flyby mission.

The robotic craft will go into orbit around the planet.

The new probe will explore Uranus in unprecedented detail.

They may also help us understand why so many exoplanets – planets orbiting other stars – are similar in size to Uranus and Neptune.

It will also investigate the moons, some of which may have water beneath an icy surface.

And, of course, where there is water there is a chance of life.

A planet on its side

Uranus is tilted over so much that its poles are where the equator should be,

The axis is tilted by 98 degrees.

In its 84 years orbit, each hemisphere has 42 years of sunlight followed by 42 years of darkness. 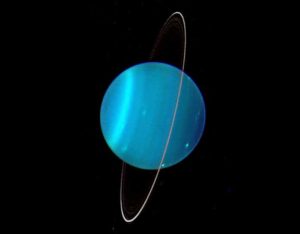 It is likely that another planet crashed into Uranus when the Solar System was young, some 4 billion years ago.

The impact knocked the planet onto its side.

The innermost of the five big moons is Miranda. 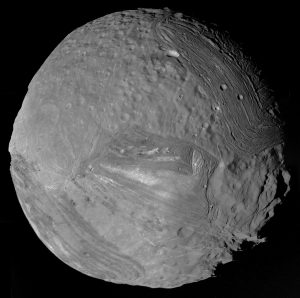 Miranda is made mostly of water ice.

Its icy surface is criss-crossed by huge canyons.

Cliffs on Miranda are the highest in the Solar System, reaching up to 20km high.

The next moon is Ariel, made of rock and ice in equal amounts. 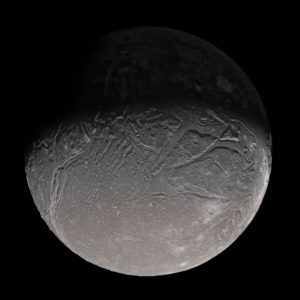 Like Ariel, Umbriel is made of rock and ice.

Its surface is very dark and heavily cratered.

The white rings around big craters may be deposits of material from the impacts. 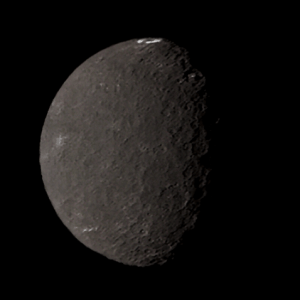 Titania is the largest moon of Uranus at almost 1600 km across.

It probably has a rocky core surrounded by a mantle of ice.

There may be a layer of liquid water between mantle and core.

The moon’s reddish surface features include craters and canyons. 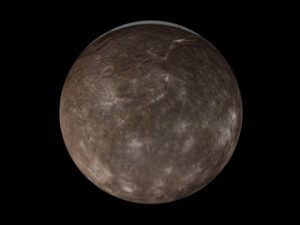 Oberon is the outermost of the big five moons.

It is made of ice and rock and red in colour.

The surface of Oberon shows impact craters and canyons. 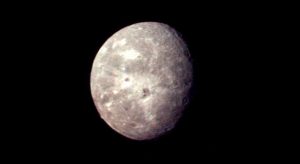 The rings around Uranus are dark and dim.

They are only a few kilometres wide and made of dust.

They may be the remains of a moon which was smashed apart by cosmic collisions long ago. 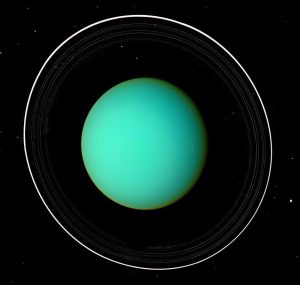 Uranus: What’s in a name?

Uranus was the first planet discovered using a telescope, by William Herschel in 1781.

But Uranus is actually just visible without a telescope.

It does need a dark sky and acute vision.

The planet was recorded several times in history but as a star.

The earliest observation was probably in 128 BC, a sighting made by Hipparcos.

Flamsteed catalogued the planet as a star.

When Herschel first saw his new object. he thought it was a comet.

When it became clear it was a planet, Herschel named it ‘George’s Star’ for King George III. 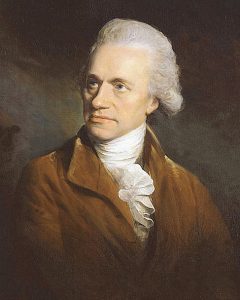 Although this was not popular with other astronomers, it earned Herschel a stipend of £200 a year as ‘Royal Astronomer’.

German astronomer Johan Bode came up with ‘Uranus’, after the Greek god of the sky.

And of course, Uranus is top of the snigger charts with young boys who have just learned the names of body parts.

They gleefully shout out  ‘Your anus’ when they name the planets in turn.

So how should the name be pronounced?

In my Wonderdome shows, I refer to the planet as ‘Yurr-ann-uss’, a pronunciation favoured by many astronomers.

However ‘Your anus’ may be more appropriate.

The planet is a windy gas giant containing lots of methane.