Out of sextilions (that’s 1 with 21 zeros) of planets that probably occupy the observable Universe there is only one little planet that we’ve studied in great detail so far. Our Earth! Therefore it is only natural that we wonder: are the other planets, at least the rocky ones, have features similar to those we see on Earth? Do the same phenomena happen there? Are there volcanoes, and planet quakes? Or thunders and lightnings? And (we get this question a lot from our young star dome visitors) …are there rainbows?

To answer the last question, let’s see how to make a rainbow on Earth. Hopefully it will help us figure out whether the similar ingredients and conditions can be found on other planets and moons.

To make a rainbow on Earth we need two main ingredients: water drops and sunshine! 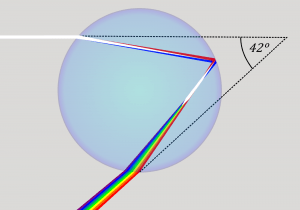 Let’s recall from the course of the high school physics what happens with the light as it goes from one medium into another medium (in our case that would be air and water).Two things! A portion of the light is reflected, or bounces off, the border, and a portion of light enters the second medium (the droplet). The light that enters the second medium is refracted, i.e. changes the direction or bends.

Different wavelengths are bent at different angles (scientists call this effect dispersion), therefore inside the water drop the white light separates into different colours. When the light (now travelling through the droplet) reaches the back of the drop, part of it leaves the drop (it will not take part in rainbowmaking) and another part bounces off (is reflected). It then travels back through the droplet and comes out. On the border of water and air the light is refracted again. We see a rainbow!

Rainbows on other planets and moons

Remember, that to make a rainbow we need sunlight, or any other star light, and water droplets, or any other liquid droplets (we are not picky), suspended in the air. Can we find these components somewhere in the Solar System?

The largest Saturn’s moon Titan boasts the thickest moon atmosphere in the Solar System. Its air is denser than the Earth’s air. Titan’s orange atmosphere is made of nitrogen with a mix of methane, hydrogen and traces of other gases. It rains and drizzles methane on this moon, which is perfect for rainbowmaking!  Unfortunately Titan is quite far away from the Sun and its air blocks most of the visible light. In such conditions a rainbow is very hard to spot. At least in the visible light.

Another Saturn’s moon, Enceladus, is a very active world with water ice plumes dashing through the cracks in its icy surface. Water ice crystals are not the same as water droplets, but combined with the sunlight they are known to produce a family of optical phenomena here on Earth called halos. Would anyone like to travel 7 years to check if there are beautiful icy rainbows on Enceladus?

How about Jupiter’s moon Europa? We sure do remember the recent NASA reports about the discovery of the water plumes on the Jovian moon? Maybe the upcoming NASA Europa Clipper mission will return some beautiful photographs of Europa’s rainbows and halos! We cannot wait!

So looks like seeing rainbows in the Solar System is possible, though unlikely. Some exoplanets probably have the right conditions for the rainbows to form. Future ground-based and space observatories will tell us more about the orbits, structures and compositions of these exotic worlds!