You might have heard that when you look up at the night sky, you see back in time. This is because stars are very far away from us and it takes starlight a very long time to reach the Earth.

The closest star to the Sun, Proxima Centauri, is 4.2 light years away. That means the light from this star has to travel 4.2 years before we get to see it.

Some other stars that you might know and recognize in the sky are even further away, their light is even older!

✨ Polaris, also known as The North Star, is 433 light years away. When we look at Polaris, we see the star as it was 433 years ago, the year Mary, Queen of Scots was executed.

✨ Betelgeuse, everybody’s favourite supergiant in the constellation Orion, is about 548 light years away according to the  paper published earlier this month.

✨ Deneb, the star in the tail of Cygnus the Swan, and one of the 3 stars that make up the Summer Triangle, is around 2600 light years away.

What’s the farthest star you can see?

The debate on what is the farthest star you can see with an unaided eye is still ongoing. This question, believe it or not, is surprisingly difficult to answer, and here is why:

What is the farthest star YOU have seen with your eyes?

The journey of the Sunlight

The sunlight is made up of tiny “packets of light” called photons, that originate in the Sun’s core. The photons are born in a nuclear fusion, when hydrogen cores smash together to make helium. As a byproduct of this reaction, a huge amount of energy is released in the form of photons. But those are not visible light photons, not the kind of light our eyes can see, but high energy gamma-ray photons. The gamma-ray photons will turn into visible light much later, when they lose a lot of energy on their 433 000 mile /700 000 kilometer long way out of the Sun.

The structure of the Sun 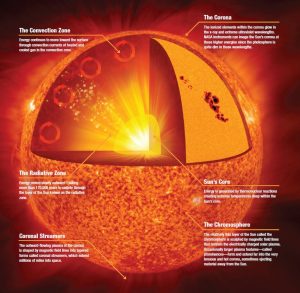 The Sun is composed of different layers, like an onion. The hottest and the densest part of the Sun is the core. There, a huge amount of matter, about ⅓ of the total mass of the Sun, is concentrated in a volume that extends from the centre to about ⅕ of the Sun’s radius. This is where all the nuclear fusion magic happens.

In between the two zones is tachocline, a thin [but very important] interface area. Astronomers think that this is where the Sun’s magnetic field originates

Finally, the outermost part of the Sun is the atmosphere. It’s made of different layers too.

So how does a photon travel through these layers?

☀️ When a gamma-ray photon is born in the Sun’s core, it begins its journey to the surface. But our photon doesn’t make it far because things are very crowded in the radiative zone. After moving a minuscule distance, the photon collides with a ‘solar stuff’ particle (hydrogen or helium), bounces off in a different direction, then collides with another particle and so on. Our photon loses a lot of energy to these collisions, becoming first X-ray and then UV photon. Through this continuous  random bouncing back and forth (no wonder that mathematically this problem is known as random walk), up to a million years after it was born, our photon finally enters the convective zone.

☀️ In the convective zone things are way less hot and dense. The hot plasma here bubbles, the hot ‘stuff’ rises to the surface, cools down and sinks, just like water in a kettle. Our photon hitches a ride in one of these bubbles up to the visible surface. Now it’s free!

☀️ The final leg of the journey to the Earth our -now a visible light- photon travels in a straight line in just over 8 minutes.

But this is still only half of the story

But not to the photons themselves. You see, according to Einstein, the closer to the speed of light you travel , the more the time dilates ( i.e. the slower your clock ticks) and the more the lengths contract. Ultimately, for a photon that travels…well… at the light speed, the fastest speed there is, there is no time and no distance. In other words, photons have no age and they do not experience time. To them, entering your eye happens instantaneously after their birth – no thousands of years of bouncing, no huge distance from the Sun traveled! Isn’t that amazing?

Did you enjoy this post? Here are some other cool posts about the Sun

Where are the Sun’s siblings?

Parker Probe: the mission to solve the mystery of the Sun

If you have any questions o comments, do not hesitate to get in touch. You can leave your comment below, find us on Facebook or check out our Star Dome website  http://wonderdome.co.uk.