When low and medium mass stars “die”, they leave behind compact remnants called white dwarfs. The theory predicts that as white dwarfs cool down, they solidify into crystal balls. And now, thanks to the high-precision data, we can finally see that happening!

The fate of stars

All stars you see in the sky at night will eventually run out of fuel in their cores and “die”. In fact, some of them might have done so already, but the light from these events is yet to reach the Earth.

The most massive stars end their lives in a spectacular explosion and leave behind a bizarre remnant – a neutron star or a black hole. The stars as massive as our Sun go quietly: they swell, then shed their outer layers to reveal a hot dense core that we call a white dwarf.

Most stars in the Universe, sooner or later, will turn into white dwarfs. A typical white dwarf is as big as the Earth and as heavy as the Sun. The matter inside a dwarf is tightly squeezed. Only neutron stars and black holes are packed more densely than that!

There is no nuclear fusion happening in the white dwarfs’ cores. Therefore these stellar remnants simply cool down and fade away to become black dwarfs. The cooling takes a long time (billions of years) and scientists believe there is not a single black dwarf out there yet.

What about the Sun?

Our Sun has another 4.5 billion years worth of fuel left, so we don’t need to worry about it just yet. At the end of that period, after burning up all the hydrogen and helium in the core, our star will turn into a compact oxygen-carbon plasma ball wrapped in a layer of hydrogen and helium. It will become a white dwarf. But what next? 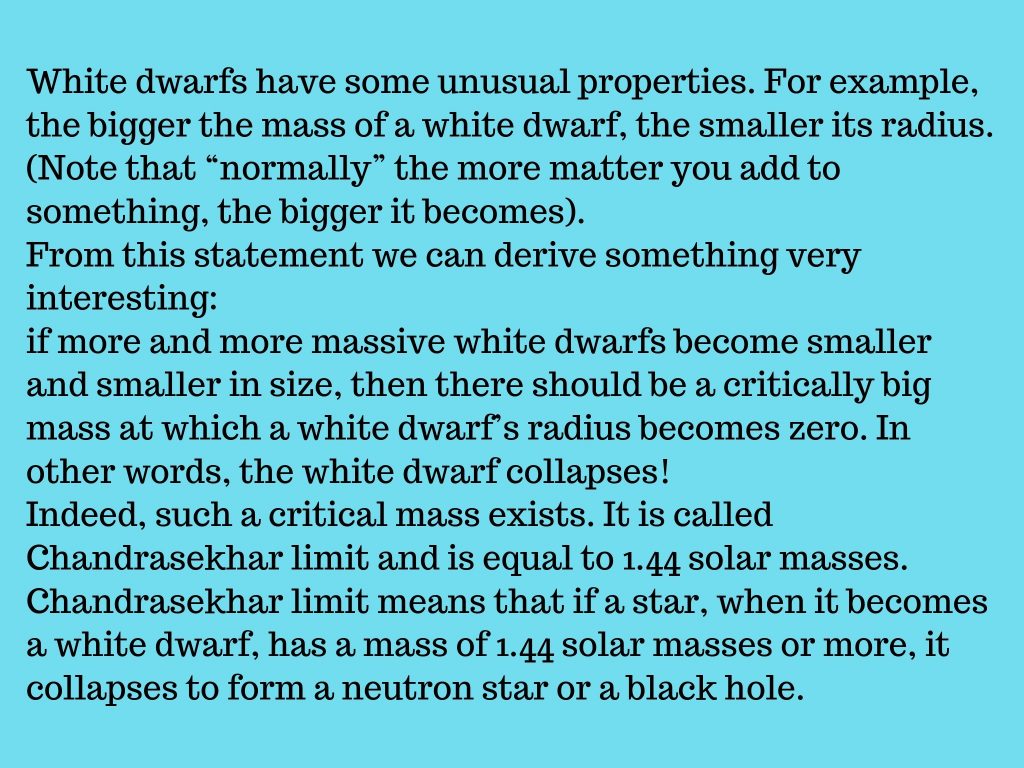 From plasma to crystal?

For quite some time astronomers have been speculating about what happens to white dwarfs as they continue to lose heat. It was theorized that when they cool down to about 10 million degrees Celsius – not exactly what we would call freezing temperatures –  the carbon and oxygen particles in its highly pressurized interiors begin to freeze into lattice, in other words, crystallize!

In a nutshell, this is why it happens. 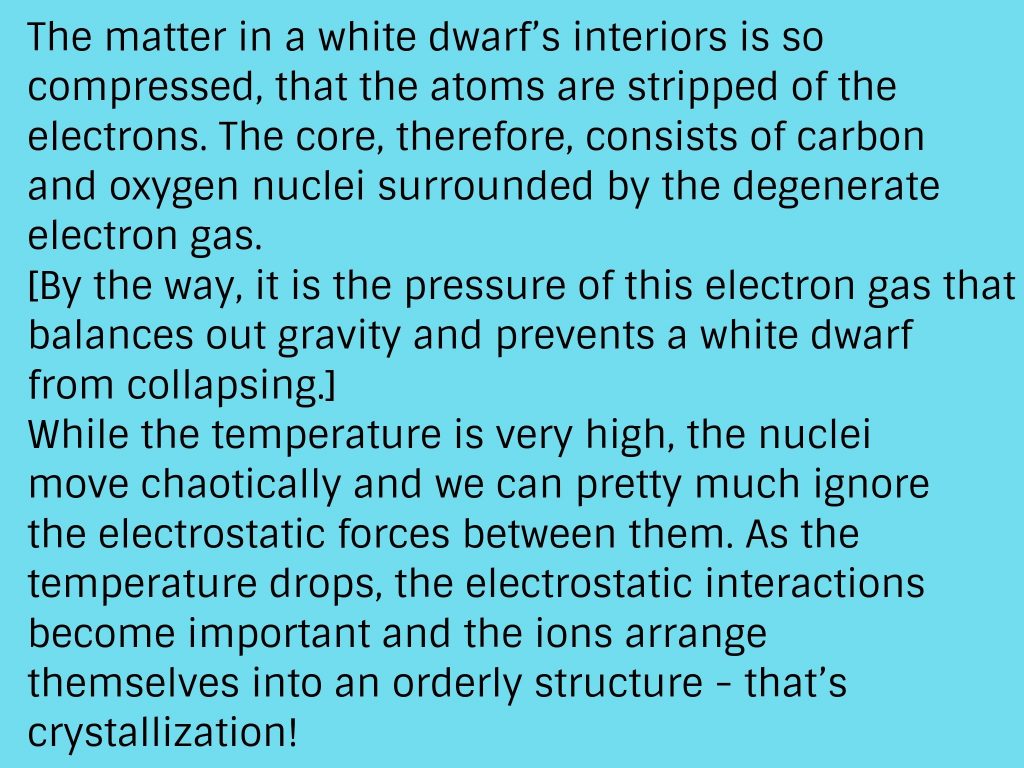 Just how quickly a white dwarf’s core will begin to solidify depends on its mass. Once the Sun turns into a white dwarf, it will take it up to 5 billion years to become a solid crystal ball. In general, the more massive white dwarfs are, the faster they are expected to start crystallizing.

Unfortunately, the whole dwarfs-turning-into-diamonds theory is tricky to confirm. The extreme densities inside white dwarfs are impossible to replicate in a lab. And it is not easy to get observational evidence of crystallization happening in the stellar remnants. But ‘not easy’ does not mean ‘impossible’. And here is how it has been done!

White dwarfs are so small and dim, that even finding one is hard work. Analyzing its interior structure to confirm crystallization is another story altogether. Nevertheless, a very special white dwarf BPM 37093 in the constellation Centaurus allowed astronomers to peek underneath its surface. This was only possible because:

Therefore researchers suggested that if white dwarfs do crystallize as theory predicts, then BPM 37093 should have began to solidify already.

To confirm it, astronomers observed this unusual white dwarf with the Hubble Space Telescope and the Whole Earth Telescope. They concluded that “a large fraction of the total stellar mass is likely to be crystallized”. Bingo!

In 2019 astronomers used another approach. They looked for the tell-tale sign of any phase transition, namely LATENT HEAT, to confirm that crystallization takes place inside white dwarfs.

According to the theory, as a white dwarf crystallizes and its particles assemble into a lattice, latent heat is released. This slows down the cooling and therefore “aging” of a white dwarf.

The release of latent heat can be observed statistically, i.e. not in individual white dwarfs. To detect it, one has to know the distances to a large number of white dwarfs very accurately. This became possible thanks to high precision measurements done by the ESA GAIA Satellite. In 2019 astronomers went through the data on thousands of white dwarf candidates of various ages, masses and luminosities observed by GAIA.  Researchers noticed a statistical pile-up, a peak in the number density of white dwarfs of certain luminosities. They recognized the observed “grouping” as a moment when white dwarfs release latent heat and the cooling slows down. Bingo!

The results of this work are described in the paper Core crystallisation in evolving white dwarf stars from a pile-up in the cooling sequence.

So… yes, white dwarfs crystallize as they cool and we can see it!

Why is this important?

Although we used the terms “diamonds” and “crystal balls” to describe the solid dwarfs, we must admit that the crystallized stellar remnants are nothing like the decorative gemstones that are so popular here on Earth. So no, we are not planning on mining them.

But we do use white dwarfs to estimate the ages of other stars. If a white dwarf is part of a binary, we can tell how old the other star is. If a white dwarf is found in a cluster, we can determine its age. We even estimate how old the Galaxy is based on the ages of the most ancient white dwarfs we can find. And that’s why it is important to understand how exactly these dwarfs solidify. The crystallizing white dwarfs appear brighter than the stars of their age are expected to be. That means, without correction for crystallization, we can significantly underestimate their age. And, by extension, the ages of other celestial objects. Oops.