Inspired by the 60th anniversary of Laika’s space flight… 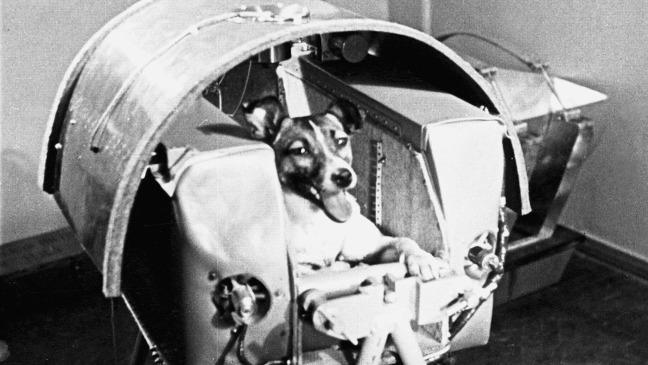 There are many famous spacemen. The soviet cosmonaut Yuri Gagarin was the first man in space. Another cosmonaut, Alexey Leonov, was the first one to goon a spacewalk. The astronaut Neil Armstrong was the first man to step on the Moon….
But were there any living creatures in space before people? Creatures that proved that a living organism can survive the stress and the harshness of space travel, take-off and landing?
Yes, and many.
Fruit flies were the first to cross the so-called Karman line, the border between Earth’s atmosphere and space that lies 100 km above the sea level. In 1947 they were sent into space aboard the German-made V-2 rocket, captured by the US at the end of the WWII. In just over 3 minutes the insects reached the “space” altitude and then were safely parachuted back to Earth.
During the 1950s-60s US launched numerous V-2 rockets with monkeys and mice aboard. More than a half of the animals died on the mission, during reentry or soon after landing.
Able and Baker were the two famous monkeys who performed the suborbital flight in 1959 and returned back to Earth safe and sound. Though their mission was a success, they were not the first higher organisms to safely return from a space journey.
In July 1955 soviet engineers launched 2 dogs, Dezik and Tsygan into space (but not into orbit). The pair reached the Karman Line and landed just a few kilometers off the launch spot.
Unfortunately Dezik died a week later during a similar space flight. Soviet scientists were so upset about Dezik’s death that decided not to use his partner Tsygan for flights anymore. Tsygan lived a long happy dog life.
The Soviet government kept the information about that (and many other dog flight that followed) a secret. It was made known to the public for the first time only in 1991.
The first animal to actually go into orbit was a dog called Laika. She blasted into space aboard soviet Sputnik 2 spacecraft 60 years ago on Nov 3, 1957. It was a one-way trip for Laika, as at that time no procedure for the safe re-entry was yet developed. The dog survived the take-off but died on the fourth orbit from overheating just hours after the launch. The scientists of Sputnik 2 mission reported many years later that back in 1957 it was not possible to create an effective way to regulate the cabin temperature.
Belka and Strelka became the first dogs to to survive the orbital flight in August 1960.
In all these spaceflights the animals were just passengers.
The flight of Ham the Chimp on 31 January 1961 took it one step further. Now the scientists were trying to find out whether a living being could actively participate in a flight. Ham was trained to pull the lever after seeing the flashing blue light and during his 16.5 minute flight he performed his task just a second slower than during his training on Earth. This experiment assured scientists that human astronauts would be able to take control of the spacecraft if necessary.
Other animal astronauts include silk worms, meal worms, crickets, stick insects, ants, cockroaches, guinea pigs, rats, tortoises, geckos, frogs, fish and some others.
Animal test were, are, and will remain a controversy. There were many protests from members of public, government officials and animal organizations following the launch of Laika as well as many other animals launches.
These days animals travel to the international Space Station alongside astronauts. They help us learn how microgravity affects living organisms.