Parents, teachers, librarians, boys and girls, did you hear the news? SPACE ODDITY, the new book by Christopher Edge, is out!

As science educators, we are very fond of fiction stories with a science twist. And when it comes to the children’s books, nobody does it quite as well as Christopher Edge. Many of his award-winning works became a staple read in the primary classrooms across the UK and introduced the children to some of science’s most mind bending concepts.

Space Oddity, although aimed at a slightly younger audience than his previous books, is also laced with science. And music. And aliens. And killer robots! So what are you waiting for? Fasten your seat belts and enjoy the space adventure!

Jake is an ordinary 12 year old boy. He lives in Manchester with his parents, an ordinary Mom and not-so-ordinary Dad. In fact, his dad is a real embarrassment! He turned bright green on the school playground (fancy being called Son of Shrek for the rest of Junior school). He cheated on a sports day dad’s sack race (because nobody can bounce this far, right?). Instead of helping with the toy stall at the school fete, he built a giant spaceship out of Lego blocks, which could have been cool if the spaceship didn’t crash into other stalls and injured some of the teachers (by the way the summer fete was cancelled). Not to mention that he likes to wear his silver space suit and packs raw onions for Jake’s school lunch.

On a ‘bonding’ camping trip father and son go following the dad’s most recent embarrassing episode (that involved dad walking on stage with a bin on his head), Jake learns that his dad is an alien who comes from a planet we call Proxima b.

Some 12 years ago he mistook David Bowie’s ‘Space Oddity’ song for a distress signal and came to Earth – something that was strictly forbidden by the laws of the Universe.

When Cosmic Authorities take his dad away to punish for entering the Cosmic Zone of Exclusion around the ‘primitive’ Earth, Jake not only rescues him, but also convinces the aliens to give humans a chance to prove that they can one day become responsible citizens of the Universe. 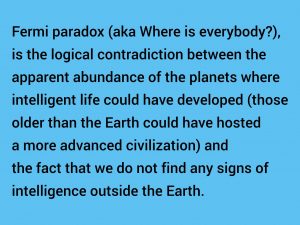 We loved the story and loved the science concepts the book touches on, such as the Fermi paradox and Cosmic Zoo hypothesis. We loved that the book talks of gravity as the bending of space-time and introduces light years as measure of cosmic distances. We loved the author’s wild guess on what intelligent aliens might look like and how they might communicate (just keeping our fingers crossed that if we ever meet an alien ourselves, it would be the one that ‘talks’ by shining different colours rather than farting). We loved how Christopher Edge made us think about whether we are alone in the Universe. But, more importantly, about what it really means to be human. 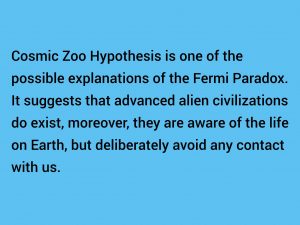 Next time you look at the stars, think of all the planets that circle around them, invisible to our unaided eye. Who knows, maybe some of these planets are teaming with life. There is still so much for us to learn – about Cosmos and about ourselves.

Thank you, Christopher Edge, for this beautiful, funny and educational read!

Other science-packed novels by Christopher Edge (and activities to help the children explore science in these books):

I spy…science facts in the book “The Jamie Drake Equation”