We love classic astronomical experiments with their intuitive core ideas, easy-to understand techniques and game changing results. Remember how Newton clapped his hands in the corridor of Cambridge, listened to the echo and measured the speed of sound? That’s it! It is hard to resist repeating some of the classic experiments ourselves!

Are you, maybe, one of those people who cannot?

The idea of this experiment and the first observations of the phenomenon belong to the famous Italian astronomer Galileo Galilei. In 1610 Galileo observed the Moon and Venus through his simple telescope and noticed that Venus, just like our Moon, goes through phases. This would only be possible if Venus lied within the Earth’s orbit and both planets orbited around the Sun. Therefore Galileo proved the idea proposed by Nicolaus Copernicus that the Sun, and not the Earth, was in the center of the Solar System.

Few people can see the phases of Venus with a naked eye. So for this experiment you are most likely to need a simple telescope or binoculars.

Venus goes through one full phase cycle in 584 days. To notice the changes in the planet’s shape it will be enough to follow Venus for several months (though by all means please do carry on through the whole cycle). Keep a record of the phases observed. When finished, figure out what mutual Sun-Venus-Earth configurations should have led to the images you recorded. How does it feel to prove the heliocentric theory by yourself?

Some tips on observing Venus through telescope

Venus is one of the brightest objects in the sky and is therefore very easy to find with a naked eye. Part of the year Venus is visible as an evening star, i.e. soon after the sunset. Another part of the year it appears early in the morning, rising just before the Sun. Since Venus is not far away from the Sun (astronomically speaking) in both cases it will appear low in the sky, near the horizon. The heat rising from the ground will therefore affect the sharpness of your image of the planet. With that in mind, do not set up your telescope on a beach or near a roadside. Experienced stargazers avoid the “air turbulence” problem by observing Venus in the daytime when it’s higher in the sky. But this method is NOT SUITABLE FOR BEGINNERS.

As for the choice of a telescope, any basic scope or binoculars will be suitable for observing phases of Venus. After all, Galileo did it with his “three pieces of glass”.

Be like …Eddington. Prove Einstein’s theory of general relativity by observing the Sun bend the starlight.

In May we celebrated the 100th anniversary of the famous 1919 solar eclipse observations (more about it in our space blog) that confirmed Einstein’s theory of general relativity. The idea behind the experiment led by astronomer Arthur Eddington was to measure the positions of stars visible near the solar limb during the eclipse and compare these measurements to the positions of the same stars taken on a normal night, when the Sun was, obviously, in a different part of the sky. According to Einstein, heavy objects warp space. Therefore the gravity of the Sun should slightly change the direction of the starlight passing close by and the stars on the eclipse images should appear to shift.

The experiment was a great success and the light deflection was indeed detected.

Despite the apparent simplicity of the experiment, only several astronomers repeated the observations in later years. 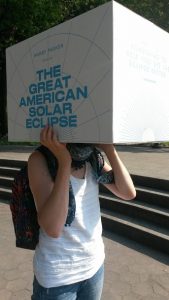 Most recently, amateur astronomer and a former optical physicist Donald G.Bruns from California dared to repeat Eddington’s experiment during the “Great American Eclipse”.

Bruns performed the legendary measurements on August 21, 2017 after over 20 months of careful preparations. Not only he confirm Eddington’s results on that day, but also achieved a way better accuracy than Eddington could dream of. Bruns’ final result was a deflection coefficient of 1.752 arcseconds. To compare, theoretical value of light deflection is 1.751 arcsec. Eddington’s experiment resulted in a number 1.60 arcseconds. What an achievement!

In 2018 Bruns received Chambliss Amateur Achievement Award from the American Astronomical Society ”…for his successful recreation of, and improvement upon, Eddington’s iconic deflection-of-light experiment during 2017 total solar eclipse, which represents a tour de force in careful observation and calibration.”

You will find more information about Bruns’ observations (instruments, software, calibration, observational technique, data analysis and so on) in his original publication. It’s an excellent guide for those thinking about repeating the historic experiment.

We wish you clear skies and best of luck with your astronomical experiments!

If you have any questions or comments, please contact our inflatable space dome team!

And check out our planetarium blog posts about space exploration, stargazing, teaching astronomy in schools and much more!