In the beginning of the 20th century astronomers were unsure whether our Milky Way was The Galaxy, or just one of many.

Edwin Hubble put this dispute to an end when he pointed the Mount Wilson Telescope at the pulsating star in what we now know as Andromeda Galaxy and figured out that this space beacon was located well outside the Milky Way. From that day on the Universe never looked the same!

Half a century later, a Space telescope named after Edwin Hubble gave us an idea about how many of these ginormous conglomerates of stars, planets, gas, dust and dark matter are out there. A lot! The most modest estimates give us a number of a few hundred billion galaxies in the observable Universe!

And the best part? Galaxies come in a variety of shapes and sizes! That definitely keeps astronomers busy.

Scientists categorize galaxies by their appearance, dividing them into three main groups: spiral, elliptical and irregular. 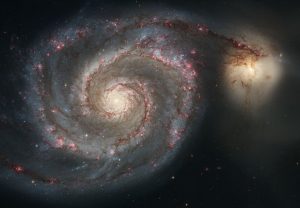 Let us tell you at once: most galaxies in Space are spiral. All spiral galaxies, just like the Milky Way, are flat disks with central “bump” and beautiful pinwheel patterns.

Technically, there are at least 3 components in every spiral galaxy:

More than half of the spiral galaxies also have an extra “bar” across the central part. These galaxies are called barred spirals. The spiral structure in a barred spiral galaxy “grows” from a bar, in a barless spiral galaxy – straight from a nucleus. Spiral structures (or spiral arms) are regions of active star formation, densely packed with gas, dust and hot stars. The hottest stars have a short lifespan and spend their whole life in the arm where they were born. Cooler stars have much longer lifespan so they travel through their arm as they orbit the center of the Galaxy! It is important to understand that spiral arms are not solid structures. Instead, they are areas where stars get stuck and pile up. It’s a galactic traffic jam! Just like on a motorway, when different cars enter and exit the traffic jam, but the traffic jam itself goes on for quite a while. 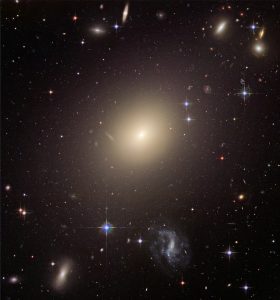 Elliptical galaxies are, well, elliptical. The exact shape can vary from spherical to squashed, egg-like, but they all have a few things in common:

Irregular galaxies are neither spherical, no elliptical. They seem to lack both a certain shape and a structure.

Most astronomers agree that peculiar galaxies form as a result of a gravitational disturbance both from the inside and out. Some are a product of a galactic merger.

Our Milky Way is a typical spiral galaxy with a bar. Its disk is 100 000 light years wide and 1000 light years thick. In the center of the Galaxy lies an object Sagittarius A* which is thought to be a supermassive black hole million times heavier than our Sun. The Solar System resides 28,000 light years away from the center, nearly halfway out (but we really don’t mind to keep some distance from a black hole!). And at this distance the Sun takes about 200 million years to zoom around the galactic center once. That’s what we call a galactic year.

Four spiral arms, two bigger and two smaller ones as well as a two smaller spurs protrude from the central bar. The Sun at the moment is located near the inner edge of one of the spurs called the Orion arm.

There is still so much we don’t know about the Milky Way, and there is a good reason for that! We sit right in the bright densely populated disk. Therefore the center of the Galaxy and everything beyond is obscured by the dust. Not the most advantageous vantage point for the observations, right? But we hope that one day the technology will allow us to travel beyond the Milky Way to see the beautiful giant spirals. That will be some view!

For more information about stars, planets and the Solar System, visit our inflatable planetarium!

If you have any questions or comments, please do not hesitate to get in touch. Our mobile planetarium team will be happy to hear from you!