Ask anybody what they associate with the city of York in the North of England and they will probably mention Romans, York’s famous medieval cathedral and Shambles, the most charming street muggles can ever set foot on.

But ask the same question to any astronomer, and they will bring up variable stars, Algol, John Goodricke and maybe even Edward Pigott. What are they on about?

Let’s step into the 18th century York and find out…

Our story starts not in York, not even in England, but in the Netherlands, where a boy named John Goodricke was born on 17 September 1764. His father (just like his grandfather and grand-grandfather) was an MP and a British diplomat and his mother was a daughter of a Belgian merchant.

Little is known about John’s childhood apart from the fact that at the age of 5 or 6 after some severe illness he got deaf. His wealthy family took him to Scotland to be educated in Braidwood’s Academy in Edinburgh, the first on the British Isles school for “deaf and dumb”. Later on John Goodricke attended Warrington Academy in Warrington, Cheshire, the school where he was known as a talented mathematician and where his interest in Astronomy probably developed.

In 1781 the 17 year old John Goodricke moved to York to live with his family and met Edward Pigott, a young astronomer (and the son of astronomer and the Royal Society Fellow Nathaniel Pigott). Despite the fact that Edward was 11 years his senior, the two quickly became friends and colleagues. It was probably Edward who got John Goodricke interested in variable stars.

Variable stars are stars that change their brightness over time. Only several such objects were discovered before Pigott. Edward Pigott was aware that several stars were listed in different reputable star catalogs as having different brightness. Suspecting that some of these variations might be due to the peculiar behavior of the stars themselves, rather than observational errors, he made a list of these blinking objects and began their systematic observations that John Goodricke eventually joined.

Together, Pigott and Goodricke confirmed the variability of the star Algol (Beta Persei), the property that was probably known to the earlier observers, and discovered that the brightness variation was in fact periodic with a period of 2.86 days. They suggested that the periodic brightening and dimming of Algol had to do with another body, possibly a planet, that orbited around the main star and eclipsed it at regular intervals. And what a brave and forward thinking idea it was! Not only it was very close to the modern explanation of Algol’s variability, but also it is exactly how astronomers are looking for planets orbiting other stars these days, three centuries later.

Alternative explanation the two observers offered (and the one the established astronomers seemed to favour) included dark spots (like those on the Sun) that were more concentrated towards one side of Beta Persei. So that when the “spotty side” was facing away from the Earth, the star appeared brighter. When it was facing towards the Earth- dimmer.

John Goodricke reported the discovery to the Royal Society and in 1783 was awarded the Copley Medal “for his discovery of the Period of the Variation of Light in the Star Algol.” Interestingly, Edward Pigott was not mentioned as a co-discoverer of Algol’s periodicity. Many researchers agree that Edward generously allowed his young friend to take credit for their joint work. Many think that the idea of eclipsing body most likely belonged to Pigott.

Delta Cephei and other discoveries

John Goodricke, most likely together with Edward Pigott, also discovered another very interesting variable star, Delta Cephei, and determined the period of its “pulsations”, 5d8h48m.  This star puzzled the two astronomers because the pattern of its brightening and dimming was different from that of Algol.  Another similar variable, Eta Aquilae, was discovered earlier by Edward Pigott.

Unfortunately, during his observations John Goodricke acquired pneumonia. He died on April 20, 1786 at the age of 21. Just a few days before his death he was elected a Fellow of the Royal Society, an honour he never learned about. Edward Pigott carried on the observations and discovered several other variable stars.

Algol and other Goodricke-Pegott variables in modern Astronomy

Both Algol and Delta Cephei became a collective name for other stars that exhibit similar behavior. We now call them “Algol-family stars” and “Classical Cepheids respectively. Both play an important role in modern Astronomy and the periodic behavior of both types is well studied and understood. 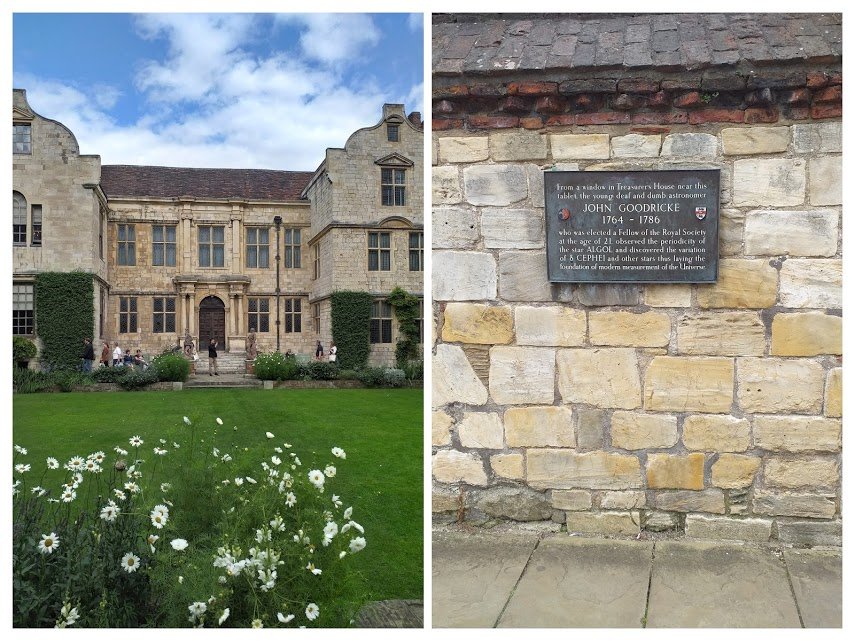 WonderDome visited the place where Goodricke lived and worked

Would you like to learn more about famous astronomers, Astronomy and space exploration?