Last week, on April 10th 2020, the European Space Agency and the whole world watched spacecraft BepiColombo fly past the Earth. BepiColombo was launched back in October 2018 to explore planet Mercury. So far the spacecraft has flown all the way to Mercury, went around the Sun and returned back to Earth. Why did it do that?

The answer is: it is still on its way to Mercury!

“How long does it take to get to Mercury”? (Pluto? Jupiter? etc) is one of the most frequent questions we get from our mobile planetarium visitors. The answer is: it depends. Do you want to perform a fly-by? Enter the orbit? Land? Each task requires a different trajectory and will take a different time and amount of fuel to complete.

But it’s not just the distance to the planet that we need to take into account. The direction, i.e. towards or away from the Sun, is important too!

For example, a spacecraft travelling to the inferior planets (i.e. those whose orbits are inside the Earth’s) will be greatly accelerated by the gravity of the Sun. Therefore, to get to Mercury and Venus, we will need to slow our spacecraft down.

To get to the superior planets, on the other hand, we will need to accelerate the spacecraft!

To gain or lose speed and change direction (the change in velocity is often referred to as delta V) we can, of course, use rocket fuel. But here is a catch: The bigger the delta V we are trying to achieve, the more fuel it requires. But the more fuel a spacecraft carries, the heavier it gets and the more fuel you need to launch this in the first place. It’s a vicious circle!

The alternative is to use the gravity of other planets to get us to where we want to be. It’s called gravity assist, or gravitational slingshot. The idea is fairly simple: if you approach a planet in the direction of its orbital motion, you get faster. If in the opposite direction, you slow down. Come at an angle, and the gravity of a planet will “bend” your trajectory. Easy!

A long journey to Mercury

Mercury is the least explored rocky planet in the Solar System. Not because it is less interesting than others, but simply because it is very difficult to get to.

Any spacecraft travelling to tiny Mercury will be accelerated by the Sun’s gravity so much it will have to brake really hard to avoid zooming past the planet. On the other hand, Mercury is the fastest planet in the Solar System. You need to fly really fast if you want to keep up!

Therefore it will take an insane amount of energy to change the spacecraft’s velocity enough to intercept the planet and enter its orbit. The good news is, we can cut down fuel consumption. The bad news: the “low energy” journey (still, the amount of energy needed would be enough to take a spacecraft all the way to Pluto!) will come at a cost, TIME!

So far only 2 spacecrafts, Mariner 10 and, most recently, Messenger, have visited Mercury! 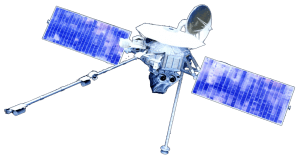 The first ever visitor to Mercury, Mariner-10, used Venus flyby to bend trajectory and get close to the target . The spacecraft’s operational orbit was around the Sun, not Mercury, but it allowed for 3 close encounters with the innermost planet. The first flyby in ‘74 provided the information about the atmosphere of Mercury. During the second ‘74 flyby Mariner 10 photographed almost half of the planet’s surface and the third ‘75 flyby allowed scientists to measure Mercury’s magnetic field. 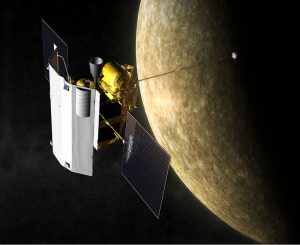 Messenger was the first (and so far the only) spacecraft to orbit Mercury. It took the spacecraft 6 years and a very complicated route – via 1 flyby of the Earth, 2 flybys of Venus and 3 flybys of Mercury- to enter the orbit of the innermost planet. Messenger stayed in orbit around Mercury for 4 years and provided astronomers with a vast amount of science data, including the map of 100% of the planet’s surface.

The current mission to Mercury, BepiColombo, is a joint project of the European Space Agency (ESA) and the Japanese Aerospace Exploration Agency (JAXA). BepiColombo, just like its predecessor Messenger, is following a complex multi-flyby trajectory. Its trip to the Mercurian orbit will include 1 flyby of the Earth (completed last week), 2 flybys of Venus and 6 flybys of Mercury and will take seven (yes, SEVEN!) years. The robotic explorer will enter the orbit of the smallest planet in December 2025 and the science mission will begin!