In the very heart of London, tucked in between Monument Street and Fish Hill just meters away from the iconic London Bridge, is London’s tallest column known as “The Memorial”. This is the Memorial to the Great Fire of London, a colossal structure erected to commemorate the fire disaster that in 1666 destroyed 80% of London and left over 70 000 Londoners without a home.

The Monument has a traditional design: a plinth, a pedestal and a pillar crowned with an urn. The whole structure stands 61 meter tall – exactly the distance from the monument to the place on Pudding Lane where the historic fire allegedly* started back on September 2nd, 1666.

*Where did the Great Fire begin? is a great read if you want to learn more on the topic

Although the Monument is visited by thousands of tourists and schoolchildren every year, many visitors and passers-by are unaware that this historic landmark was originally built with a scientific purpose in mind. IT WAS MEANT TO BE A TELESCOPE! A zenith telescope, to be precise.

The designers and the design

Sir Christopher Wren, the architect behind many of London’s most famous landmarks from St Paul’s Cathedral to the Royal Observatory, is often mentioned as the designer of the Monument. But it was in fact a joint project of Wren and his friend Robert Hooke, a polymath, an inventor, an architect and a professor of Geometry.

The structure these two gentlemen designed was meant to be two things at once: a monument and a telescope to observe the small patch of sky visible through the column.

How to… turn a pillar into a telescope 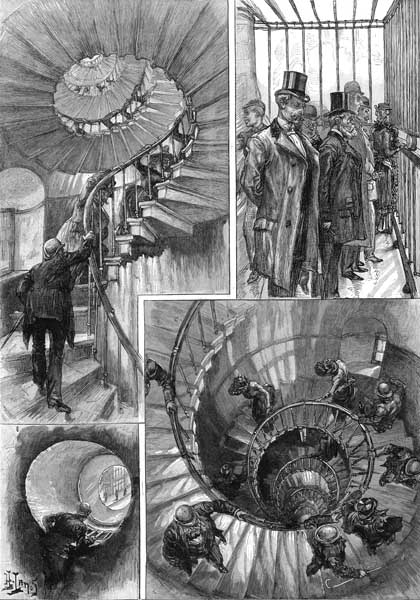 Inside the Monument’s column is a spiral staircase with a central opening. That’s the tube of the telescope.The observational room is located in the basement. From that tiny room an astronomer can see the patch of the sky located directly overhead through an eyepiece. Telescope lenses can be placed at different heights above depending on what is to be observed.

Unfortunately, because of the vibration caused by the heavy traffic nearby, the structure was not stable enough to serve the purpose. Nevertheless, after the Monument was completed, Robert Hooke used it as a laboratory and performed many of his famous scientific experiments in there.

Why build a zenith telescope in the first place?

It might be hard to believe today, but Hooke built his telescope-monument to prove that the Earth orbits the Sun. Indeed, he was looking for the observational evidence of Copernicus’ theory! Of course, the heliocentric system, that is the view that the planets, including the Earth, revolve around the Sun, has been around for almost a century (after all, Copernicus published his De Revolutionibus in 1543), but the idea still lacked observational proof and was not widely accepted.

With the help of his 61-meter ‘telescope’, Hooke was hoping to measure what astronomers call stellar parallax, an apparent shift in the position of a star that occurs when we observe it from the Earth throughout the year. The shift happens because the Earth itself moves in its orbit. As a result, at different times of the year our star of interest appears in front of different background stars.

The problem is, because stars, even the ‘nearby stars’, are very far away from us, this effect is very small and hard to measure. In fact, the first successful measurement of the stellar parallax did not occur until the 19th century. Observing stars through the Earth’s atmosphere makes the task of measuring stellar parallax even more difficult since the air bends the starlight. That’s something astronomers call atmospheric refraction. What’s worse, the amount of bending, or refraction, depends on how high a star is above the horizon.

The solution? A zenith telescope! By pointing a telescope at zenith, i.e. the point directly overhead, we get to observe the starlight that comes straight down, 90 degrees to the atmosphere, and eliminate the bending problem! But what sounds like a simple and elegant idea, turned out to be a very difficult experiment. And, sadly, Wren and Hooke’s Monument-telescope was not the best instrument for the job.

Irina Vladimorova is a presenter at WonderDome Planetarium and a regular contributor to WonderDome Astronomy Blog. She holds a degree in Astrophysics and a special place in her heart for planetary science.