We all know how planets orbit the Sun in our own Solar System. But what is going on in a planetary system that includes a group of stars and a handful of planets? (read more about these monstrosities in our previous space blog “Planets in multiple star systems”) Are you already imagining a swarm of stars moving like Brownian particles with planets zooming past in a figure-of-eight manner? Because we are!

There are indeed some planets orbiting their host stars in a such a fashion. Unfortunately the figure of eight and other kinds of exotic orbits are very unstable and things usually end badly for stars and planets involved. “Kick-out-of the system-or-crush” kind of badly. Ouch!

Then how DO planets and stars orbit in a multiple star system?

Let’s look at the simplest example of a binary system.

In a binary two stars orbit around the common center of mass. That’s simple. If a binary have a planet, then two types of configurations are possible (this short video will illustrate both possibilities):

If there is more than two stars in a multi-star system, they will be organized in a “hierarchical way”  i.e. as “nested binaries”.

*There is another, chaotic type of star arrangement called trapezia, but it is quite unstable and therefore not interesting for us at the moment.

In case of a triple star system “hierarchical way” means that there is a close binary orbited by another star.  Hierarchical arrangements of higher order are illustrated on the “mobile diagram” below (it does look like a ceiling mobile, doesn’t it?). “Hierarchy” here refers to a number of layers on a diagram. 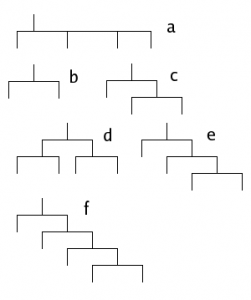 If we now add planets to the multi-star system, the situation will get even more complicated. But just as with binaries, the planets will have the same choice of orbits and will be either circumstellar or circumbinary.

We have to remember, that although there are different ways to group together a few stars and a planet (or planets), in each case there will only be a small region where the orbit of the planet will remain stable (i.e. the planet will not crush into one of the stars and will not be slingshot out of the system). For example, if a circumstellar planet is too far from its host star, than the gravity of the stellar companion(s) will disturb the planet’s orbit. And the consequences might be catastrophic! The same will happen if a circumbinary planet orbits its stars a bit too close.

Many theoretical studies have been done recently to address the issue of the orbital stability in various planetary configurations. To understand where to look for exoplanets in a multi-star system, astronomers perform numerical simulations. They “play” with different parameters, like masses, mutual distances, orbital eccentricities (that is how round or how squashed the orbit is) and inclinations (that’s the tilt of the orbit) and try to see which combinations lead to stable planetary systems. When astronomers have the right numbers, they can create “maps” of stability regions for different planetary configurations!

What is that for, you may ask?

Well, the next step is to look at the real observations of multi-star systems and compare them to the theoretical “maps”. This way we can predict the existence of yet undetected planets! And sometimes even tell what method of observation we can use to have the best chances of finding it! How cool is that?

Finally, let’s see what kind of planetary orbits we observe in multi-star systems!

There is still so much to learn and explore! Don’t you think?

If you want to do some more research on the topic, we would recommend the following papers:

If you have any questions or comments please let our inflatable planetarium team know!