Every visitor to the Czech capital has their own list of “must see” places. On that list are probably the beautiful Prague Castle, the official residence of the Czech Republic president, Karluv Most (Charles Bridge), that connects the Castle with the Old Town, and, of course, the grand medieval Astronomical Clock.

Join WonderDome Planetarium today as we visit the magnificent clock, learn all about its history and find out what its dials, numbers and pictures mean and how to “read” them!

The Prague Astronomical Clock, or the Orloj, as they call it, has been measuring the passage of time for over 600 years. Built in 1410, it’s been continuously repaired, upgraded, redecorated and restored ever since. During the most recent works in 2018 the modern additions were removed and the original look of the instrument (as far as we can tell based on incomplete records) was restored. The legend has it that if the clock stops, a great disaster will come over the country. No surprise, that a special clock master performs “health check” of the Astronomical Clock every week!

The Astronomical Clock up close 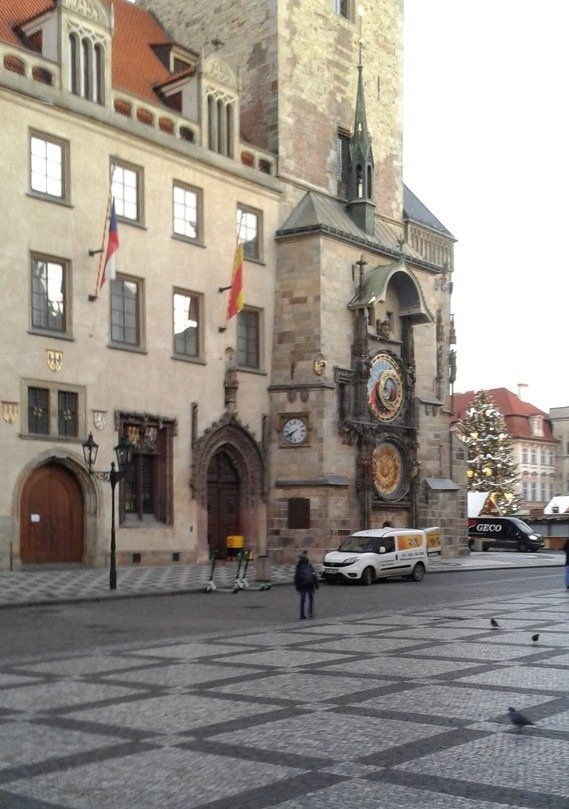 The Hall Tower early in the morning before the tourists arrive. Image: WonderDome

The Astronomical Clock decorates the southern face of the Hall Tower located in the very heart of Prague’s historic Old Town. You can visit the instrument any time. But stop by between 9 AM and 11 PM and as the clock strikes the hour you will see a spectacular show. The 8 figures decorating the clock will come to life, and the 12 apostles will parade in front of the little windows above the upper dial. The performance will end with the trumpet player dressed in medieval costume playing a tune from the balcony on the very top of the tower and waving hello to the cheering crowd below. But the Clock is much more than just an intricate design and moving figures. It can tell a lot to those who understands its language!

The Astronomical Clock consists of two faces. The upper face displays time or, rather, TIMES. It’s flanked by the figures of Vanity (man with a mirror) and Greed (man with a bag of gold) on the left and Death (skeleton with a bell and an hourglass) and Lust (man with a lute) on the right. The lower face displays astronomical information. This face is flanked by the figures of Philosopher and Archangel Michael on the left and Astronomer and Chronicle on the right. The figures were added at different times after the clock was built.

Let’s have a closer look at each of the dials and find out what information they display!

Upper face of the Astronomical Clock

If you look at the upper face of the Prague Clock, you will notice several dials that keep track of modern and ancient times. 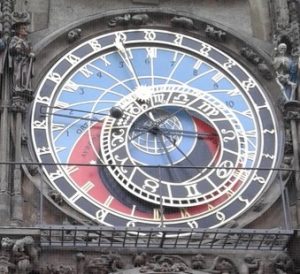 The lower face of the Clock displays the calendar. It is not as informative as the upper face, but absolutely stunning. Here you can see 12 months represented by the big circles as well as the 12 signs of the Zodiac represented by the smaller circles.

We hope that now, if you ever visit the Astronomical Clock, you will be able to fully appreciate this unique instrument!

Have you already seen the Clock? Please tell us all about your visit! And don’t forget to share your photographs with out mobile planetarium blog readers!