Curtis here reporting from Moving to Mars exhibition at the Design Museum in Kensington. A public space event I went to this Sunday after bringing Wonderdome the Moble Planetarium to a birthday party in Kensington.
You know what? I think it was great! 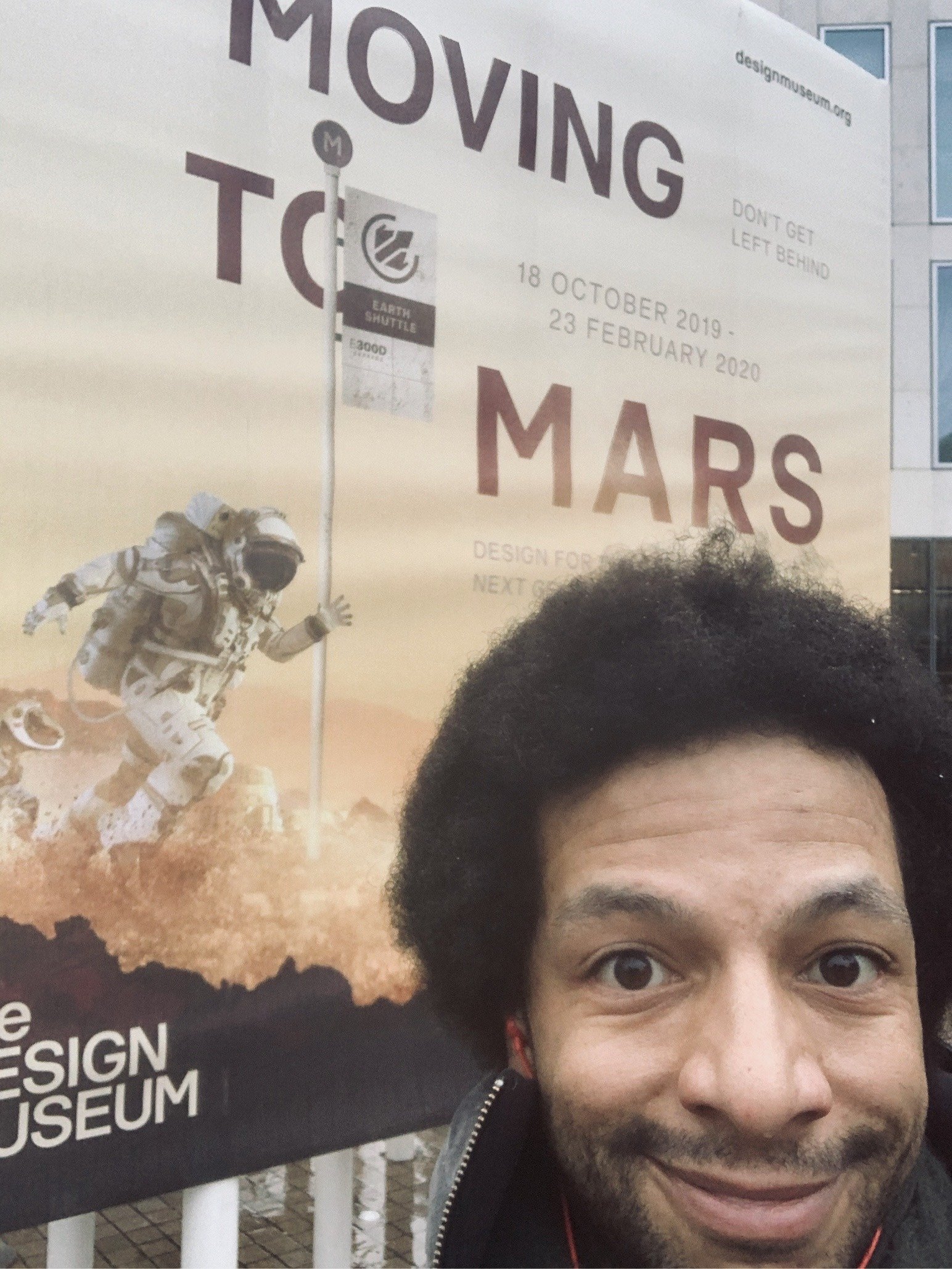 The presentation here starts with how Mars has been viewed and interpreted throughout history. It then looks at popular cultural representations of ideas about Mars and what people thought might be out there. The presentation in these rooms finishes with the history of Martian exploration – probes, Rovers, satellites and the like.
The rooms here is populated with videos, photos, models, actual items from the history of space exploration. It goes as long back to an Ancient Greek urn that depicts the planet Mars as a boy beneath Helios’ chariot. Many of the exhibits ether original or full-sized replicas.

In the next room, there’s a great video presentation that uses huge wraparound screens. The show includes photos taken by Curiosity at various stages on its journey on Mars. Great attention to details! The floor in this room textures and modelled from Curiosity’s findings to resemble the Martian floor. The feature that really helps to immerse the viewer in what a visit to Mars right now might be like. Throughout the presentation, various facts and photos about what Curiosity has found on Mars pop up overlaid on the views.

The next room is about recent and current space exploration. Here you will find about the development of the rockets to the Moon and Mars. Fact, these were developed after the war using captured Nazi German rocket technology. You will look at living in space on spaceflights such as the Apollo missions as well as aboard Mir and the ISS. with videos, artefacts, and clothing on display. I didn’t spend much time here as an announcement was made while I was in this room that the museum would be closing in half an hour so I hurried on into…

Room 4: How can humans live on Mars?

Here the visitor can look at current thinking about how humans could live on Mars. How structures could be built incorporating the Martian regolith. There are many scale models showing proposed ideas in various stages of construction. There is also displays, mock-ups, and explanations of how all the various physical and mental needs of the astronauts would be met. The exhibition also presents how various systems such as plant growth, atmospheric generation, water supplies, and waste disposal/re-purposing could all be intertwined for efficiency. There were some pretty awesome mocked up full-size inflatable habitat pod and living area. The visitors even allowed to go in and try out the 3D printed furniture.
There’s another impressive wraparound video that places the viewer in the shoes of an astronaut heading to a new life on an established colony on Mars for the first time through some innovative animation.

Room 5: Future in the eyes of current explorers

Finally, there’s a section where I think there are videos and writings by members of the space exploration community, including the UK’s Tim Peake, as well as people who have contributed to the exhibition. They all were giving their thoughts on living on Mars, and possibly their thoughts on the exhibition itself. Unfortunately, I did not get to see this room properly as the museum closed before I got here.
Overall: thumbs up for! Well worth the visit
It was a great experience. The exhibition really brought home, in a way I had not appreciated before, just how alien and hostile Mars is. It made me think about how incredibly precarious a colony there would be. I also considered how ingenious the efficiency of the proposed solutions will be. I just wish I got there about half an hour to an hour earlier to spend more time. My visit lasted for about an hour and forty-five minutes. If you like to read every info panel and watch every video, allow good two and a half hours for the visit.
The exhibition is open until 23rd February. The costs, with no concessionary discounts, £16 + a £2 donation. Exhibition open until 18:00 daily I think, but the staff were ushering people out at 17:45 when I went. So that’s a thing to bear in mind if you go later in the day.
Best wishes from Curtis
Wonderdome Planetarium presenter.

PS. By the way, did you know that Wonderdome brings mobile planetarium shows to primary, secondary and special schools? Lastly, we also bring astronomy and stargazing shows to private and public events

Moving To Mars – Trailer from Design Museum on Vimeo.