Whenever we ask our star dome visitors to name the Solar System ringed planets, a choir of voices immediately says “Saturn”. A few people mention Uranus and, occasionally, Neptune.

In fact, all the gas planet in the Solar System, Jupiter, Saturn, Uranus and Neptune, have rings around them. Maybe not as spectacular as those of Saturn, but still very interesting and even puzzling for astronomers.

So let’s look at the less famous rings of Jupiter, Uranus and Neptune and learn about their origin, structure and composition! 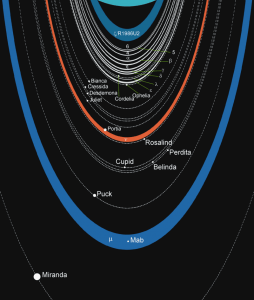 The rings around Uranus were first officially discovered in 1977 by J.L. Elliot, E. Dunham and D. Mink. The team of astronomers spotted the rings using NASA infrared telescope installed on transport aircraft. First they found five main rings of Uranus, then another four during the follow-up observations. The last four known rings were discovered by the mighty Voyager-2 spacecraft and Hubble telescope.

The discoverer of Uranus, German-British astronomer William Herschel, also claimed that he observed one of the rings of  Uranus back in the 18th century. But neither his own follow-up observations, nor the observations of the other astronomers in the two following centuries could not confirm the discovery. Most scientist agree that Hershel could not have seen the ring with his telescope. But other works point out that the position, orientation and appearance of the ring described by Hershel is consistent with modern observations of the biggest Epsilon ring. Additionally, there is a number of reasons why the ring was not visible again for so long. Mystery!

At the moment we know 13 faint rings of Uranus. The particles that make up the rings vary in sizes from grains to 20 meter boulders. The rings contain very little dust. They are thought to be made of ice mixed with some organic material.

Astronomers think that the rings of Uranus formed when a few of the planet’s moons collided (boom) and smashed (ouch) to pieces some time 600 million years ago. 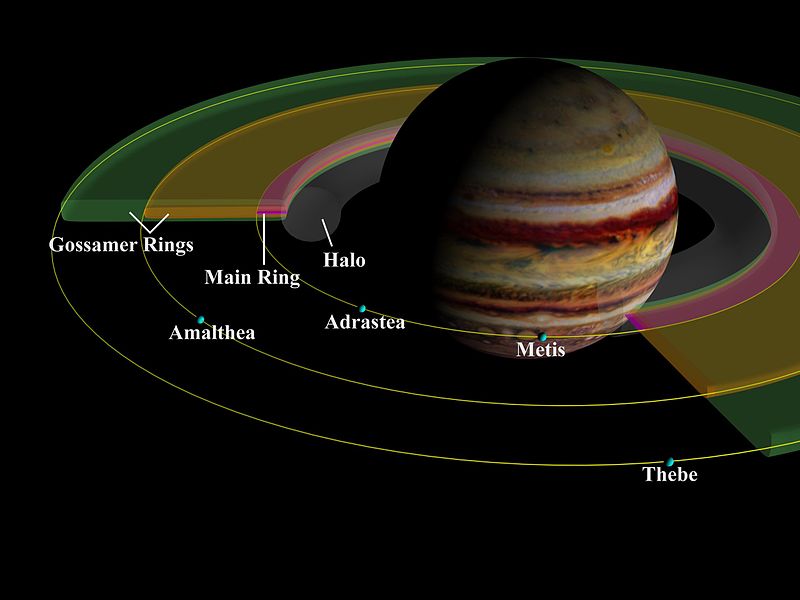 Two years after the discovery of Uranian rings, scientists were surprised to find another ring system, this time around the gas giant Jupiter.

The rings were discovered not from Earth, but from space, by Voyager-2 spacecraft in 1979 and later explored in more detail by the space missions Galileo, Hubble, New Horizons and Cassini.

The faint rings of Jupiter are made of dust. There are four distinctive rings in the Jovian system: the innermost halo ring, the main ring and the two outer gossamer rings.

Scientist think that Jupiter’s ring system is about the same age as the planet itself but the dust particles in the rings are quite young.

The gossamer rings are called Amalthea and Thebe by the name of the moons that “feed” the rings with dust ejected from their surfaces during collisions with the particles from the outside of the system. The two innermost rings are fed the same way by the moons in the main ring. 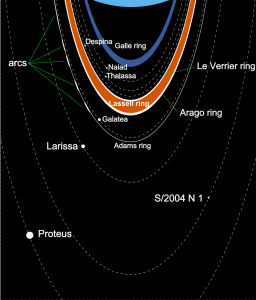 Rings around Neptune were the last to be discovered.

In 1989 Voyager-2 zoomed past planet Neptune and finally confirmed the long suspected existence of the rings. Starting from the discovery of Neptune many astronomers reported seeing the events that hinted the presence of the rings but the observations were inconsistent.

Neptunian rings resemble those of Uranus, but contain much more dust (up to 70%).

There are five rings in the Neptunian ring system. They bear the names of the scientists who made major discoveries about the planet:

Astronomers think that the rings of Neptune might be of the same age and origin as the rings of its neighbour Uranus and appeared after the fatal collision of some of the Neptune’s former moons.

So it turns out Saturn’s rings are not unique. But they are still out favourite!

Feel free to use our lesson plans to create your very own unique space lesson/ talk/ presentation.