Some thoughts on coding for children

It is a very popular idea that we should teach the kids how to code as early as possible.

Many people think, that with the modern world turning more and more “techy” by day, coding might become one of the fundamental skills to learn, like reading and writing. But will it, really? We don’t know.

Still, there is little doubt that learning how to program is good for kids. It teaches them math logic, problem solving, the way the computer thinks and what not. It is a way to get creative and have fun too! Not to mention that coding skills can help the children in their future career. After all, many jobs, especially those in STEM, require programming skills. Does your child wants to become a space engineer, astronomer or an astronaut? Then teaching them how to code is a way to go!

Computer Science at (and out of) school

The public education system tries to catch up with the popular demand for programming skills. In 2014 the ICT curriculum was replaced with the new computing curriculum. The focus of education shifted from merely teaching pupils how to use the computer and some basic software to teaching them computer logic and coding. According to the new curriculum the children should

There is a huge variety of after school initiatives aimed to teach the children how to code too. Take, code club, for example. Founded in the UK 7 years ago as a free after school activity for kids age 9+, Code Club network has now spread across the country and worldwide with “12 000 clubs in over 160 countries”. Chances are, there is code club in your area too! The sessions in the Club are run by the volunteers who teach the children how to program on Python, HTML&CSS and, for the very beginners, Scratch! 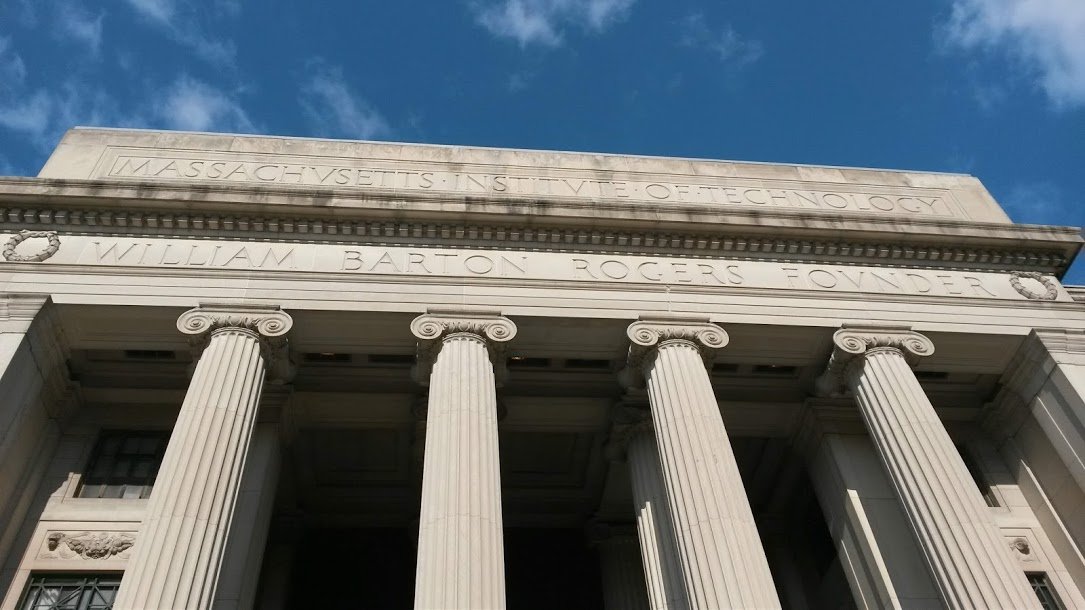 Scratch is a hugely popular programming language for children and young adults age 8-18. The brainchild of Lifelong Kindergarten, one of the groups of MIT Media Lab, Scratch has been around for the past 16 years and is now used in many schools, code clubs, libraries etc.

Scratch is a visual programming language. Which means you don’t need to write a code yourself. Instead you drag and drop ready-made blocks of code, or scripts, to create your program. You can use other users codes to build your own and, in turn, share your creations with other “scratchers”. Characters and objects, they are called sprites, can be used to create visual presentations, like games and animations.

To find out how to program on Scratch and to see some of the examples of the programs on Scratch, watch these Harvard University online computer science lectures by Professor David J Malan (the lecture on Scratch starts from 36th minute of the video). The lectures are lots of fun and are suitable for the absolute beginners, both kids and adults!

If you’ve read our post Planetarium visit and classroom space activities, then you already know that we love interdisciplinary approach in learning Astronomy. One of the ways to learn more about Space and to reinforce new astronomical concepts might be through programming!

So, teachers and parents, the next time your child/ class learns something new about space, why not offer them to do a “Space coding” activity!

Create an animation of the Earth’s rotation or write a code to calculate escape velocities for different celestial bodies…the possibilities are endless! You can use Scratch, or any other programming language your learners are familiar with.

Examples of “Space” programming on Scratch

But let’s do some Space coding right now! Our today’s project is inspired by the discussion we recently had with the Y5 inflatable planetarium visitors about calendars, Earth’s orbit and leap years!

Just to remind you, a leap year is a calendar year containing one additional day, February 29th, which is called a leap day. There are 366 days in a leap year and 365 days in a common year. Leap years occur approximately once every four calendar years. This adjustment is necessary to synchronize the calendar year and an astronomical year, because an astronomical year (i.e. the time it takes for the Earth to orbit the Sun) lasts almost 365¼ days. To compensate for the ¼ day per year discrepancy we add another day almost once every four years (4*¼=1).

The algorithm for determining whether a year is a leap year is represented by the diagram below. 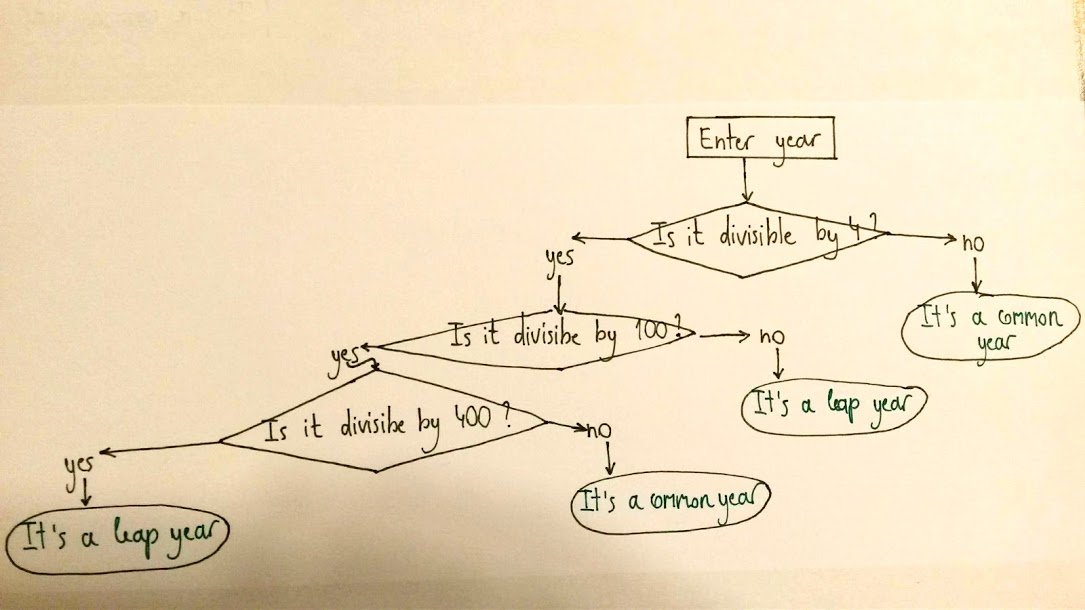 Now let’s roll up our sleeves and, using the above algorithm, write a program on Scratch that will tell whether a year we enter is a common year or a leap year! 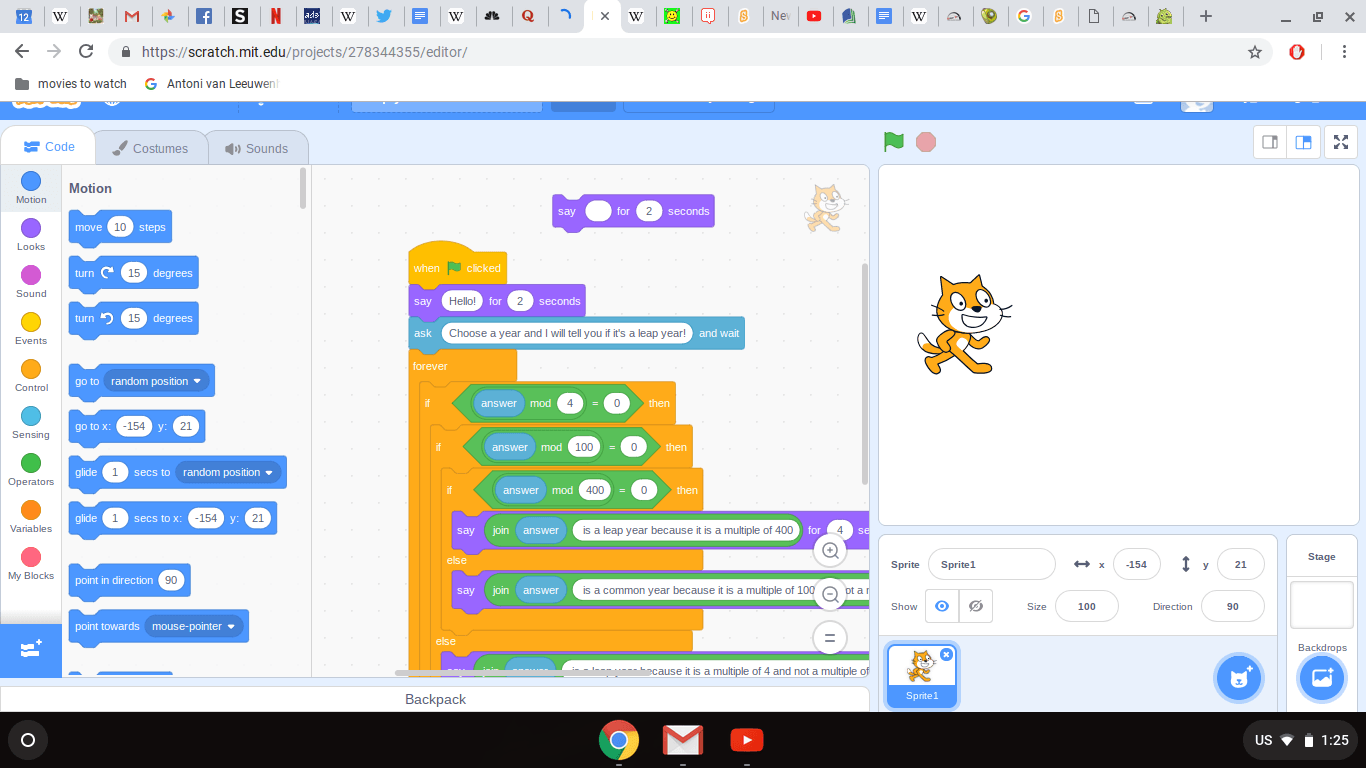 Our Leap Year Project on Scratch

Follow the link to find our Leap Year Project!

If you have any questions or comments, please let our Space Dome team know. We would love to see your space programs too!