If you grew up watching Armageddon, then you probably associate asteroids with catastrophes, explosions and world destruction. On the other hand, space scientists are very fond of asteroids. They hope that detailed studying of asteroids will help us learn more about the history and formation of the Solar System. Maybe even about the origin of life on Earth!

So what are asteroids? Are they friends that will help us answer some fundamental space questions and eventually provide us with valuable resources? Or foes that will one day wipe the humankind off the face of the Earth?

Asteroids are small rocky objects, leftovers from the formation of the Solar System. They contain the same primodal material out of which the planets were formed, including some very valuable elements: water, iron, nickel, titanium, aluminium, silver, gold and platinum.

There are millions of asteroids in the Solar System, ranging in sizes from meters to nearly 1000 kilometers. Most asteroids orbit the Sun in the area between the orbits of Mars and Jupiter called the Asteroid belt. But that’s quite far away, right? Does that mean we are safe? Unfortunately, from time to time the asteroids can leave the Belt, thanks to collisions, gravitational tug from the gas giants and other effects, and go on a free ride across the Solar System. Sometimes it’s a good news (that is how planet Mars got its two moons), and sometimes less so (the dinosaurs would have agreed with me on that one). Some of those former asteroid belt inhabitants end up orbiting the Sun in the close proximity to the Earth.

You might have heard about the Near-Earth Objects, or NEOs. By definition those are the objects that can get closer to the Sun than 1.3 astronomical unit. NEOs that can potentially cross the Earth’s orbit and are big enough to crash into the planet (we estimate they should be 30-50 meters big) form a separate group, called potentially hazardous objects, or PHOs. Sounds scary! Most of the PHOs are asteroids. But some of them are comets, including the famous 55P/Tempel-Tuttle comet that produces the annual November Leonid meteor shower (more about the Leonids in our space dome blog Leonid meteor shower). Scientists have spotted around 1900 potentially hazardous asteroids by how. That is a lot of hazard if you ask me!

Many groups of scientists worldwide scan the sky in search of the NEOs. Once the new NEO is spotted, the data goes to the NASA Center for Near Earth Object Studies that performs the calculations of their orbits. The Center for NEO Studies supports the NASA Planetary Defense Coordination Office. Their job is to coordinate the detection and further tracking of PHOs, and, if it comes to the worst, to figure out what to do to prevent the collision. Sounds good! Only at the moment we don’t have the technology capable of redirecting or safely disposing of an asteroid on the collision course with the Earth.

How to prevent the collision

Scientists consider many different “impact avoidance” techniques. They include crashing the spacecraft (unmanned, of course!) into the asteroid, using nuclear explosion on the surface, inside or nearby the asteroid (Armageddon all over again!) and even flying a heavy spacecraft near the asteroid long enough for the gravity of the spacecraft to change the asteroid’s course! Our absolutely favourite method to avoid the big “Boom” is to use the so-called Yarkovsky effect.

The Yarkovsky effect is a great example of how “a drop of water breaks a stone”. Or in our case how the sunlight changes the orbits of the space boulders up to 30-40 meters in size! 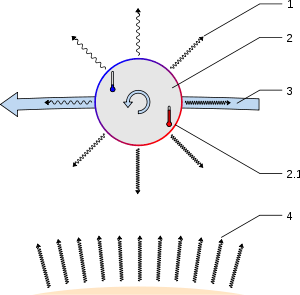 You can imagine it as a little push that an asteroid gets when it first warms up under the sunlight and then re radiates the heat as it cools down. Here is a brilliant video that demonstrates how it works. For more information about the Yarkovsky effect read this paper. The first direct measurement of the effect on the asteroid (6489)Golevka showed that the rock drifted 15 kilometers off-course during the 12 year observations. One kilometer per year! That’s not enough save the humankind! To speed up the effect scientist consider painting the dangerous asteroid white (or black) or even building a huge lens to increase the amount of sunlight that hits the rock.

Luckily, none of the PHOs we know of threatens to hit the Earth soon. There is still time!

Stay tuned! We will be looking on the bright side of having the asteroids close-by next!