Fifty years ago,  April 16, 1972, saw the launch of the penultimate mission to the Moon.

Apollo 16 was the fifth Moon landing.

It’s aim was to explore the area of the Descartes Highlands.

The crew would collect a variety of rocks to test this theory. 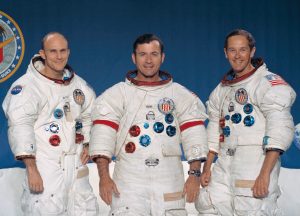 He had flown on two previous Gemini missions.

Young was also Command Module pilot of Apollo 10, the final flight before the Moon landing in 1969.

The Command Module pilot was Ken Mattingly. The module was called Casper.

He had been scheduled to fly on the ill-fated Apollo 13 but exposure to measles grounded him.

Mattingly would stay in orbit round the Moon whilst Young and Duke went on to land.

He had acted as CapCom for Apollo 11, the first Moon landing.

At 36 years old, Duke was the youngest astronaut to set foot on the Moon.

Journey to the Moon 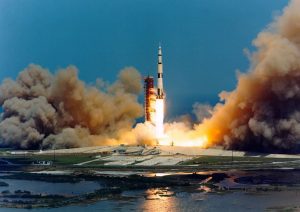 The journey was mostly uneventful apart from a problem with Casper, the Command Module.

During a routine check, the spacecraft shuddered.

Mattingly told Mission Control  ‘I be a sick bird’.

It took six hours to sort the problem.

They began their visit to the Moon with a much needed sleep. 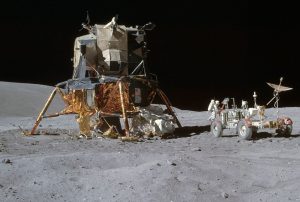 In setting up an experiment, Young tripped on some cables.

His accident damaged the equipment beyond repair.

Young was more successful with other experiments.

Charlie Duke had his problems too.

The astronauts had drink dispensers in their spacesuit helmets.

They contained orange juice to keep their potassium levels topped up.

But Duke’s dispenser leaked into his suit.

He complained to Mission Control about ‘damned oranges’.

As a result, he was reprimanded for using bad language! 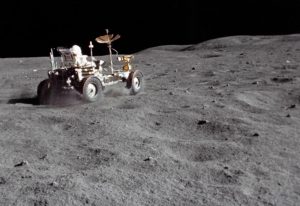 The two astronauts made three journeys in the lunar rover.

In total, they covered 27 kilometres, 17 miles.

On the first excursion they picked up a big rock, the largest returned from the Moon by any mission.

They named it ‘Big Muley’ after mission geologist William Muehlberger.

The second rover trip took the astronauts to Stone Mountain.

On its slopes, they reached the highest elevation of any Apollo mission.

Charlie Duke reported that the view was ‘spectacular’.

Young and Duke then visited a number of craters, picking up more lunar rocks. 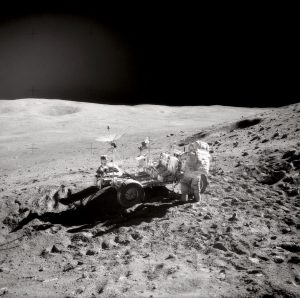 On the third and final day on the Moon. the astronauts drove to two large rocks.

They named them House Rock and Shadow Rock.

On the way they set a lunar speed record of 10.7 mph as the rover careered downhill.

Before they left the Moon, Charlie Duke placed a family photo on the Moon’s surface.

Young drove the rover to a safe distance so that its camera could record their departure.

Orion lifted off from the Moon and the two astronauts joined Mattingly in Orion.

They flew safely back to Earth and splashed down in the Pacific Ocean on 27th April.

Young and Duke spent 71 hours on the Moon, just under three days.

They carried out three Moonwalks and clocked up 17 miles in the rover.

In all, they collected 96 kg of Moon rock.

Ken Mattingly in the Command Module orbited the Moon 64 times in 126 hours.

He photographed the Moon from close up.

The Descartes region had been chosen because geologists thought it was an area of volcanic activity.

The rocks collected by the astronauts dispelled this idea.

They showed evidence of meteorite impact, not lunar volcanoes.

This finding was another building block in our knowledge of how the Moon was created.

Where they are now.

John Young went on to command the first Space Shuttle flight in 1981.

He returned to space in another Shuttle mission in 1983.

Young continued to work for NASA until 2004.

He had been with the space agency for 42 years.

Charlie Duke retired from NASA in 1976.

He took up a Coors beer franchise and later followed other successful business activities.

Duke is now 86 years old and living in Texas.

Like John Young, Ken Mattingly went on to command Space Shuttle missions in 1982 and 1985.

After retiring from NASA in 1985, he worked for a variety of companies involved in the space industry.

And like Duke, he is 86 years old and lives in Virginia.

As in all the Apollo missions, the Command Module was the only part of Apollo 16 to return to Earth.

Casper is on show at a space centre in Huntsville, Alabama.