In recent months displays of the aurora, Northern Lights, have been seen in Britain.

And aurorae are often seen further north, in Iceland for example.

So what causes these spectacular natural light shows? And what exactly do they look like? 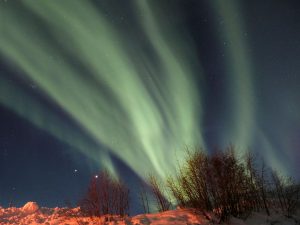 The Sun and aurorae

The Sun gives out radiation in the form of light and heat. The light takes just over 8 minutes to reach our Earth.

This stream of particles, mainly electrons and protons, is the solar wind which constantly bathes the Earth.

Solar storms, in the form of solar flares and Coronal Mass Ejections, increase the energy of the particle stream.

When these particles hit the earth’s atmosphere, they can cause an aurora.

The particles are fast-moving  but still take two or three days to reach Earth.

So when we observe violent activity on the Sun, we have an alert to a possible auroral display. 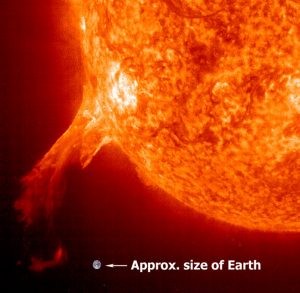 The fast-moving particles, mainly electrons, collide with oxygen and nitrogen molecules in our atmosphere.

When they return to their normal state, they emit the energy as light and we see an auroral display.

Oxygen produces green light, the most common colour of the Northern Lights.

Aurorae and the poles

Aurorae are seen towards the Earth’s north and south poles.

This is because the Earth’s magnetic field funnels the flow of particles toward the poles.

The incoming particles ionise gases in the air and form an Auroral Oval. 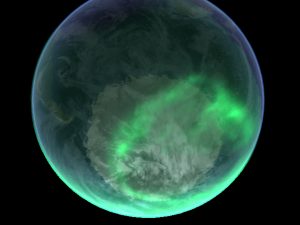 Auroral displays make the air glow at a height of 80 to 150km.

The International Space Station often views the aurora from above, at a height of 400km. 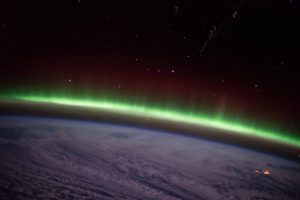 In March 2012, I was lucky enough to see a wonderful display of the Northern Lights in McGrath, Alaska.

At around 10pm, we saw a dim green haze in the sky.

We knew what might happen and made our way to stand on the frozen Kuskokwim river.

The hazy glow brightened and became glowing veils of purple and green. 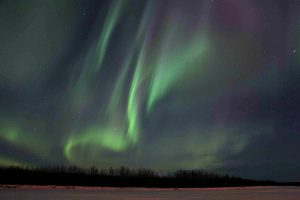 Soon the display became bright green waves of light moving gently above and around us.

We stood entranced for the next two hours as curtains of shimmering incandescence danced in the arctic sky. 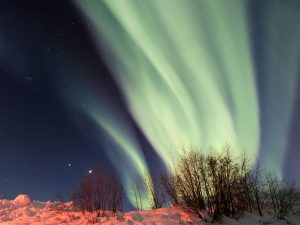 Bright green flames seemed to engulf trees on the bank.

In the background Jupiter and Venus added their sparkle to the scene.

Eventually the Moon began to rise and illuminate the night sky.

The aurora seemed to sense the bright new arrival and began to flicker and fade. 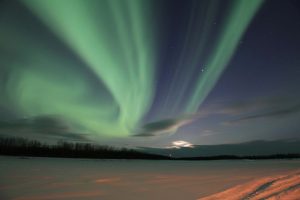 When the last glimmer of green left the sky, we made our way back to the warmth of our hotel.

We had witnessed one of nature’s most spectacular shows.

For myself as an astronomer, it was a wish becoming glorious reality.

There are websites that offer predictions of possible auroral displays.

They work by taking data from satellites which monitor changes in the Earth’s magnetic field.

AuroraWatchUK is run by Lancaster University and gives colour-coded assessments of auroral activity.

Aurora-alerts is a smartphone app that gives short and longer-term forecasts of possible Northern Lights.

Solar activity is increasing in its regular cycle so auroral displays will become more frequent.

However, the Northern Lights are still a rare phenomena in UK skies.

If seeing them is on your bucket list, look out for trips to places like Iceland and Norway.

Here, in the far north, the Northern Lights are frequent visitors to the long winter nights.

I hope that one day you might see nature’s wonderful  light show.