Imagine a small world somewhere in the Solar System. Its surface is made of water ice, in some places – smooth and shiny, in some – cracked and cratered. It is always chilly here, the average temperature is about -200 degrees, and the Sun looks small and dim. But if you are standing in the right place, you can see a breathtaking sight: enormous Saturn frozen in the sky, it’s rings – just shadows below the planet’s equator…

Welcome to Enceladus, the sixth biggest moon of Saturn, the shiniest object in the Solar System, one of the few worlds with the global water ocean and a place that seems to have all the ingredients necessary to support life as we know it.

But let’s start at the beginning…

Enceladus was discovered by the English astronomer William Herschel in 1789. Hershel’s son named the moon after the giant Enceladus, son of Gera and Uranus in Greek Mythology. Voyager 1 and 2 spacecrafts visited Enceladus in the 80s. The photos they sent back to Earth revealed a surprisingly bright object that most likely has been “recently” geologically active. In fact, Enceladus looked so interesting, that scientists decided to take a closer look at the moon during the next big mission to the Saturnian system, NASA Cassini-Huygens probe, that was launched into space in  October 1997 and reached Saturn in July 2004.

In February 2005 Cassini finally arrived to Enceladus. During its first flyby the spacecraft captured images of something that looked like plumes dashing through the cracks in the moon’s icy surface. Could there be liquid water in that permanently frozen place? After this amazing discovery, the whole mission was replanned to give more time and attention to Enceladus. Overall, Cassini made a total of 22 close encounters with the moon between 2004 and its final E-22 flyby on December 19, 2015. The information Cassini collected about Enceladus was totally unexpected and absolutely amazing. It completely changed our understanding of how things work in the outer Solar System!

In 2017 Cassini mission ended. But the program was so successful and so rich in information, that astronomers will be analyzing Cassini data for years and years to come!

What Cassini taught us about Enceladus

Enceladus is a small ice covered moon with a diameter of about 500 km. Underneath the ice there is a global salt water ocean 30-55 kilometers deep.

Enceladus has an unusually large core made of porous rock. The size of the core hints that Enceladus used to be much bigger in the past and by now has lost about 30% of its water. The moon has probably been active for a million years!

Near the South Pole area, where the ice is the thinnest, Cassini spotted four young tectonic features nicknamed tiger stripes. These are surface fractures, each about 130 kilometers long and 500 meters deep. The stripes are much warmer than the surrounding surface: 200K versus 75K outside. 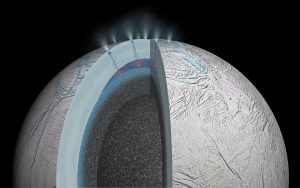 Dozens of narrow jets of water vapor, ice and dust grains come through these fractures at tremendous speeds. Some of them move faster than the escape velocity from Enceladus (250 m/s), meaning they do not fall back on Enceladus but escape into space and become part of Saturn’s E-ring where the moon resides. When astronomers calculated how much material gets ejected from the moon (150-250 kilograms every second) they realized that the plumes of Enceladus are the source of the E-ring! (More information about Saturn’s rings in our space blog post Rings around gas giants.)

The presence of huge plumes allowed Cassini to fly through the jets and sample the material with its two mass-spectrometers.

Cassini found out that about 1% of the gas in the plumes is hydrogen. This is a sign that  hydrothermal activity takes place at the bottom of the moon’s ocean.

Cassini also detected organics, including large complex organic molecular structures. Scientists think that these molecules form in the Enceladus’ core. The bubbles transport them to the top where they stay as a thin film on the surface of the ocean.

Therefore inside Enceladus we have liquid water, organics and source of heat –  the key ingredients for life!

But  where does the energy come from?

The moon’s slightly elliptical orbit means the pull of Saturn can be stronger or weaker in different parts of the orbit. That makes Enceladus stretch and squash slightly as it moves around its planet. Now, because the core of Enceladus is a porous rock (and the subsurface water fills the core), the tidal deformations cause the water to rub against the rock. That produces a lot of heat! It’s like when you rub your hands together to warm them up. This process, known as tidal heating or tidal dissipation, is the most likely source of Enceladus’ energy.

Now, after the Cassini mission ended, we consider Enceladus (along with Jupiter’s icy moon Europa) to be one of the top alien-hunting destinations. Hopefully, the next mission, specifically designed to search for life and prebiotic activity, will be on its way to this fascinating Saturn’s moon soon.

Would you like to learn more about Saturn, its moons and search for life in the Solar System?

Visit one of our inflatable space dome shows, read our blog or send your questions and comments to our portable planetarium team!