Pluto is a tiny world near the edge of our Solar System.

Our world was excited at its discovery and it spent over 70 years in the planetary family.

It was resized and reclassified and is now just one of many dwarf planets.

Then it came back to prominence with the visit of a robot spacecraft.

Pluto was discovered in 1930 but the search began years before.

Finding Pluto was a difficult task, it was so far away. 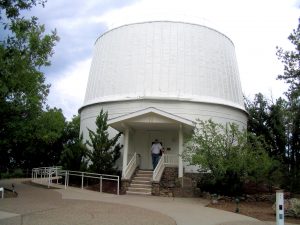 Lowell became fascinated with the idea of an another planet beyond Neptune which became known as ‘Planet X’.

Lowell devoted his observatory to finding this new world. Sadly, he died in 1916 without finding it.

The search was resumed in 1929 and the task of finding Planet X was given to a young observer.

He began a planned photographic search for the new planet. 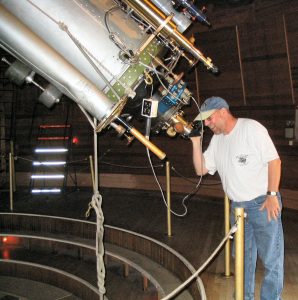 Dennis looking through a telescope at Lowell observatory.

Tombaugh used a blink comparator, an instrument that let him compare two photos of the same area of sky.

He looked for any ‘star’ which had changed position. 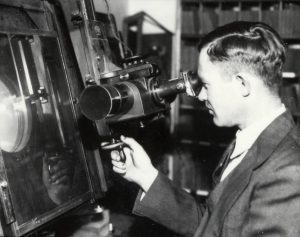 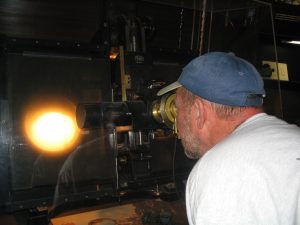 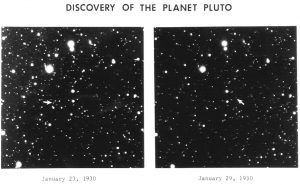 The next search was for a suitable name for the new world.

Astronomers made several suggestions but none gained universal favour.

Then an 11-year old girl in Cambridge, England came up with the ideal solution.

Venetia Burney suggested the name to her grandfather who passed it on to friends and eventually to Lowell Observatory.

Staff at the observatory voted unanimously for Venetia’s idea and she was awarded the grand sum of £5!

It was a perfect name not only because of it was the god of the underworld but it also began with the initials of Percival Lowell.

In May, 1930, Pluto was pronounced the the ninth planet in our Solar System..

The name was adopted by the Walt Disney studios when Pluto the dog joined Mickey Mouse.

Then in 1941 a newly made element was named plutonium.

When Pluto was discovered, it was thought to be the size of the Earth.

But it’s size was revised downwards over the years.

It is smaller than our Moon and weighs in at only 0.2% the mass of earth.

In the 1990s, more objects were found orbiting in the same area as Pluto, the Kuiper Belt.

In 2006, the International Astronomy Union redefined a planet.

Regular planets should be spherical, orbit the Sun and have cleared their orbit of debris.

Pluto failed the last criterion and was demoted to a Dwarf Planet.

In July, 2015, Pluto was back in the news when the New Horizons space probe flew by the tiny world.

Launched in 2006, NASA’s probe took over 8 years to reach Pluto.

Even the most powerful telescopes on Earth show Pluto as a mere speck of light. 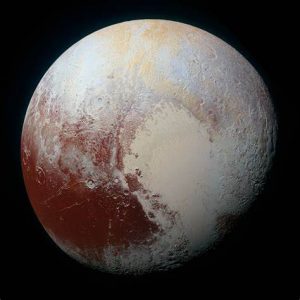 Its left side, named Sputnik Planita, is a nitrogen-ice glacier.

Venetia Burney, who died in 2016, is remembered by a nearby crater. 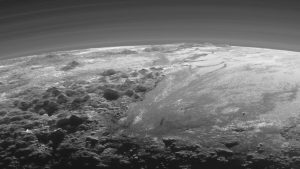 Close up images showed mountains made of solid water-ice and a hazy atmosphere.

There may be liquid water underneath the sea of ice.

Just as fascinating as the images of the dwarf planet were the close-ups of its largest moon, Charon.

They show a huge canyon, 1600 km long, stretching across the face of Charon.

The brown colouration at the pole maybe material blown from Pluto itself. 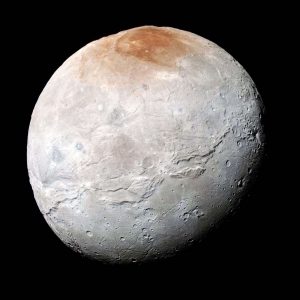 Pluto’s eccentric orbit sometimes carries it inside the orbit of Neptune.

It spins the opposite way to most planets so the Sun rises in the west and sets in the east.

Pluto is smaller than several moons of other planets, including our Moon.

It has five moons: Charon, Hydra, Nix, Kerboros and Styx.

The sky is so dark that anyone there would be able to see stars during the day.