Approximately 3200 miles (5200 kilometers) below your feet lies the Earth’s inner core, the solid ball of iron and nickel almost as hot as the surface of the Sun. The pressures in that region are tremendous – 3,300,000 to 3,600,000 atm (compare that to the comfortable pressure of 1 atmosphere you are experiencing right now). As much as we would like to study our planet’s deep interiors, no human or robot can withstand these hellish conditions. In other words, the Earth’s core is out of bounds.

Journey to the centre of the Earth

“Go down, bold traveler, into the Jokul of Snæfels crater, which the shadow of Scartaris touches before the calends of July, and you will make it to the center of the earth. I’ve  done so. ”

In reality, we’ve never travelled to the centre of the Earth. The deepest man-made hole in the World is the Kola Superdeep Borehole on the Kola Peninsula in the Russian North-West. It took almost 20 years to drill that 7,619 miles (12,262 meters) deep and 9 inches (23 cm) wide ‘well to hell’ as the locals call it. But 7,610 meters is not even the outer core, or the mantle, but a mere ⅓ of the way into the Earth’s crust in the Baltic Shield.

The project aimed to reach a depth of about 15 000 meters but was abandoned in the early 1990s – drilling any deeper proved unfeasible. Several drilling projects were attempted by other nations but each barely ‘scratched the surface’.

Therefore every piece of information we have about our planet’s deep interiors comes from indirect measurements (mostly from analyzing the seismic waves passing through the Earth). Our technology is simply not good enough to allow us to directly reach, see and sample the core material.

But what if we can study the Earth’s core not by going DOWN, but UP, 280 million miles (450 million kilometers) up to be precise, into the heart of the Asteroid Belt. There, among thousands of other chunks left over from the formation of the Solar System, resides 16 Psyche, an asteroid that might hold the clue to understanding rocky planets, including our own!

16 Psyche is not just any asteroid, but one of the biggest asteroids in the Asteroid Belt: 16th largest by size and 9th by mass. It was discovered by Italian astronomer Annibale de Gasparis (director of Naples Observatory) on March 17th, 1852 and extensively observed ever since.

16 Psyche is a rare M-type, or metallic, asteroid, the other two types being C-type (carbonaceous) and S-type (stony). Unlike most asteroids in the Belt that are made primarily of rock and ice, 16 Psyche has a lot of metal in it, although how much exactly we don’t yet know. Up until recently astronomers thought that 16 Psyche is 90% metal, mostly iron and nickel, and 10% rock. But the latest data suggests there might be less metal – only up to 60%.

This unusual composition closely resembles the composition of the Earth’s core. Scientists suspect that 16 Psyche is a core of a ‘planetary seed’, or protoplanet, that lost its rocky interiors to the collisions and never became a proper planet. If the guess is correct, then studying this unique object will not only tell us more about the early Solar System, but about our own planet too!

There is a lot we don’t understand about this strange asteroid. Luckily, we might get some answers soon, when the NASA Psyche mission will arrive at its destination. 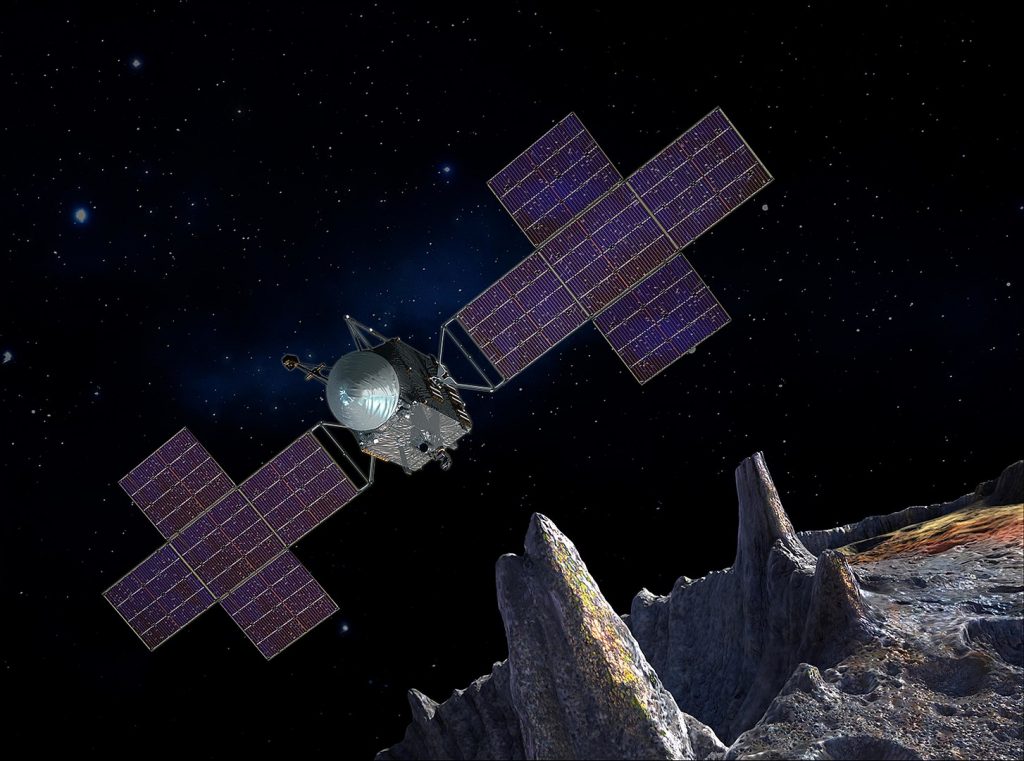 In 2022 NASA will launch a Discovery Class (i.e. ‘low budget’) Psyche mission to study the asteroid 16 Psyche. The spacecraft will receive a gravity assist from Mars in 2023 and reach the orbit around the metal asteroid in 2026, where it will remain for 21 month to study the 16 Psyche’s surface, magnetic field and composition. The mission will answer the biggest question of all: is Psyche the core of a planet? Because if it is, it would be the first planetary core we will get to see.  We cannot wait!

If you enjoyed this post, check out our other Space Blog posts, such as Fantastic meteorites and where to find them!

If you have any questions of comments, please get in touch either via the the form below or our web site http://wonderdome.co.uk. We would love to hear from you!