Meteorites, the chunks of rock and metal from space, can be found practically anywhere on Earth. Yet, despite their expected abundance, meteorites are not easy to spot, unless you know when, where and what to look for. Not only are they often hard to distinguish from the Earth rocks, but also our planet is very good at hiding meteors: they sink, get covered in vegetation and altered due to weathering. Good luck searching!

Yet, many people make a living by recovering meteorites and selling them to the museums, institutes and private collectors from all around the world. And to many others meteorite hunting is part of their research or even a hobby.

But where can one find a meteorite? How do you tell a meteor from the Earth rock? Is there some special equipment that can help detect meteors? Let’s find out!

Meteoroid is a small object in space made of rock or metal or both. Everything between the size of a dust grain and an asteroid is classified as a meteoroid. If a meteoroid crosses the path of the Earth and enters our atmosphere (or that of any other planet or a moon) we talk of a shooting star or a meteor. ‘Meteor’ refers to the light streak associated with meteoroid’s passing through the atmosphere. The fiery descent vaporizes most space rocks, but the few that survive the journey fall onto the Earth. We call them meteorites. If a planet or a moon has no atmosphere, a meteoroid will hit the ground – this event will be called an impact flash –  without producing a meteor.

Tonnes of space stuff falls towards the Earth every day. Luckily for us, most of it burns up in our atmosphere. The rest hits the ground, either directly, or first exploding in the air and then showering down as hundreds of fragments. The most recent explosion took place over the city of Chelyabinsk, Russia, on February 15, 2013. On that day a 20-meter object entered the Earth’s atmosphere and exploded less than 30 kilometers above the surface. The fragments that survived – about 5 900 kilograms in total  – fell to the ground and many were later found and collected. The largest fragment – a 654 kg rock – was recovered from the bottom of the Lake Chebarkul.

Scientists estimate that the airbusts like the one caused by Chelyabinsk meteor happen on Earth once every few decades or so. But don’t worry, most explosions occur above the ocean or unpopulated areas. Phew!

In general, the in-falling rocks from Space are not as dangerous as it may sound. Most extraterrestrial material that reaches the Earth’s surface comes not in big heavy chunks, but in the form of tiny grains called micrometeorites, 1 millimetre or smaller in size.

Where to search for meteorites

Antarctica is the place where we find the most meteorites. The cold environment preserves the rocks from weathering and rusting and the white background helps to identify dark space stones. Of course, most of us cannot simply go to Antarctica to search for space rocks. But we can look in other places. Places that are flat and barren and where a black-ish rock can be easily spotted, such as Mojave Desert in California, the deserts of Australia, Morocco, Algeria and Mauritania, Canadian Prairies and the US Great Plains are some of the popular space rock hunting spots.

It is also possible – using weather radars and meteor cameras – to detect incoming rocks, calculate their approximate landing site and then search for the newly-fallen meteorites! Here is how.

Meteorites in a city?

If you want to look for ‘space stuff’ in urban areas, try the rooftops!  According to Jon Larsen and his 2017 book In search of stardust: Amazing micrometeorites and their terrestrial imposters, this is where micrometeorites can be found. With a magnet, a microscope and Larsen’s catalog of Earth particles you might be able to find a tiny meteorite bead or two without even going out of town. Good luck!

Here are some successful and not-so attempts

There is a lot of expensive equipment on the market that can assist you with your meteorite search. But quite a few people succeed with using just their eyes and a stick with a magnet (neodymium magnets are the best!) . A magnet stick will allow you to quickly check out a rock without having to bend and pick it up – your back will be grateful at the end of the day!

The next tool up the price chart is a metal detector plus some digging tools. Be prepared to excavate metal cans, rusty bolts, old pipes and maybe even a meteorite! For more details see meteorite hunting equipment.

How to authenticate a meteorite

If you find an unusual-looking rock and suspect that it might be a meteorite, check if

✅ your rock is attracted to a magnet

Most meteorites contain iron and a magnet test is a good way to start. Use a strong magnet as stony meteorites don’t have a lot of metal in them.

✅ your rock is unusually heavy for its size

✅ your rock has a fusion crust

A fusion crust is a black glassy crust that forms when the surface of a meteorite melts as it goes through the atmosphere. There might be tiny cracks in the fusion crust.

✅ your rock has irregular shape and round edges

✅ your rock has ‘thumbprint’ – like depressions (they are actually called regmaglypts)

If, after examining your rock, you still think it might be a meteor, contact your local museum or University and ask if they can identify it for you! Most will be happy to help or will let you know where you can send it for authentication.

Some of the most famous meteorites 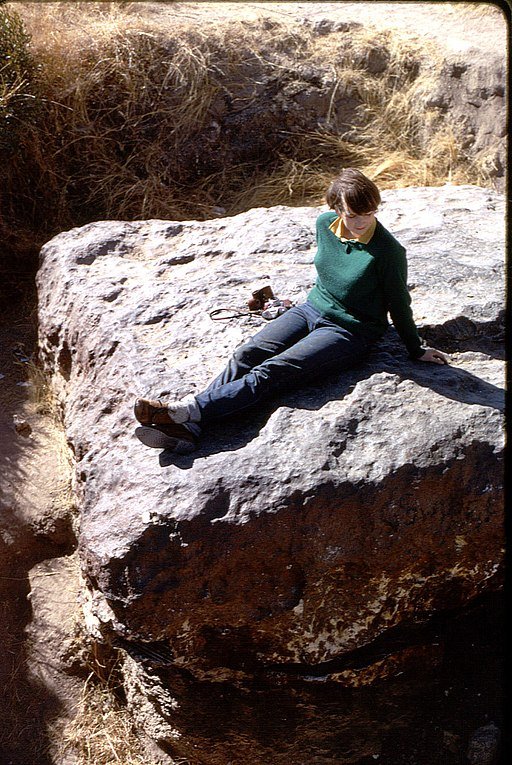 Hoba is the biggest meteorite found on Earth. It was discovered – by accident – by a local farmer in 1920. Today the 60+ ton iron chunk still lies where it was found. Dug out and enclosed in an amphitheater, it is now a National Monument of Namibia and a popular tourist attraction.

Our personal favourite, this 15 tonne iron meteorite was found in Oregon, USA. The meteorite probably landed on an ice cap somewhere in Canada at the end of the last Ice Age and then traveled with glaciers all the way to the Willamette Valley in the US. The Clackamas Indians, who lived in the Valley, called it ‘Tomanowos’, meaning visitor from heaven, and believed in its healing powers.

Today, after the almost 100 years battle for its ownership, the rock is displayed at the American Museum of Natural History in NYC.

The Barwell meteorite arrived to planet Earth on Christmas Eve 1965. The ‘turkey size’ space chunk exploded over Barwell, a small village not far from Leicester, into thousands of small pieces. 44 kilograms of the meteorite stuff have been recovered by the eager meteorite hunters and locals. A  fragment of the Barwell Meteorite, found in 1966, is now on a display at the National Space Centre.