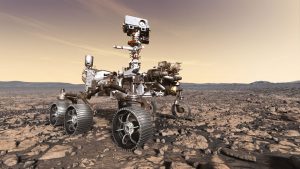 On February 18, 2021, the Perseverance rover landed on the red planet.

It would also collect rock samples for return to Earth by a future robotic mission. 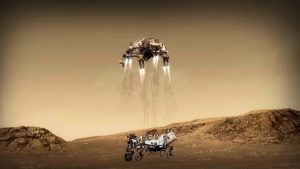 The size of a car and weighing a ton, Perseverance is the heaviest rover so far landed on Mars.

Among its instruments are MastCam-Z, which can take panoramic and zoomed images.

Its Supercam can provide remote chemical and mineral analysis as well as images..

The rover landed in the Jezero Crater. 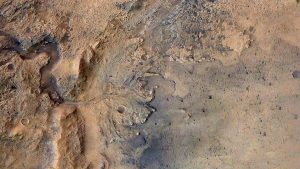 Long ago the Jezero crater was filled with water.

Perseverance landed in the delta of a river that flowed into the crater. 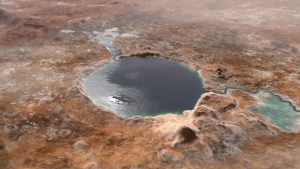 The landing site was named Octavia E. Butler after the African American science fiction writer who died in 2006.

Perseverance is the sixth rover landed on Mars by NASA.

Others like Sojourner, Spirit and Opportunity are no longer operational.

Curiosity is still active. The Perseverance design was based on this rover.

NASA ran a competition for school students to name the new rover.

It was won by seventh-grader Alexander Mather of Burke, Virginia, with  ‘Perseverance’.

And speaking of names,  I’m now on Mars!

My name and nearly 11 million others are on 3 silicon chips on an aluminium plate on the rover. 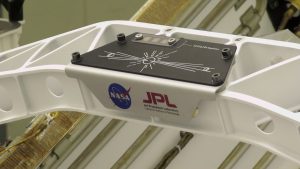 The rover uses Autonav software to find its way round rocks and obstacles.

In less than a year, Perseverance has travelled further than any other rover.

On February 14th it travelled 320 metres, the furthest distance in a single day.

During its stops, the rover has taken the first rock core samples from another planet.

You can follow Percy’s travels on the interactive map at

The mini-helicopter Ingenuity stands half a metre high with rotors 1.2 metres wide.

It weighs 1.8kg on Earth but only 0.7kg on Mars, whose gravity is less. 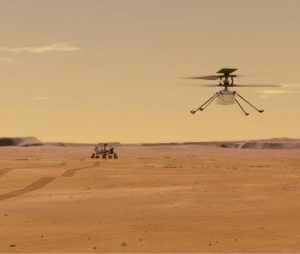 So far it has flown 26 times. The longest flight saw it cover 709 metres.

It recently took images of spacecraft debris at the landing site.

Ingenuity carries a piece of fabric from the Wright brothers airplane that flew in 1903.

Its take-off and landing area is called Wright Field.

On April, 20th, 2022, Perseverance saw the Moon Phobos pass in front of the Sun.

This is Mars’ version of a solar eclipse. not quite as spectacular as Earth’s counterpart.

Phobos is only 11km across and orbits just 6,000km above the Martian surface. 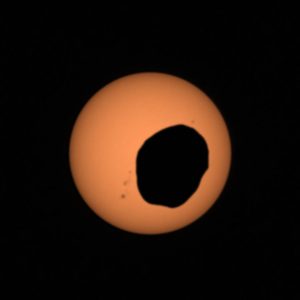 Coming up for Perseverance

Perseverance is expected to continue its travels in the Jezero crater for at least another year.

It will complete one Martian year, 687 days on the surface of the red planet.

As well as taking images, it will sample rocks that might hold evidence of past life. 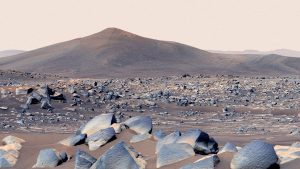 The rover will continue to cross the ancient river delta.

It will take around 40 rock samples to store for a future mission to collect.

After the traversing the delta, Perseverance will climb to the rim of Jezero crater.

One of its science missions is to test extracting oxygen from carbon dioxide in the Martian air.

Future astronauts may look back and thank Percy for paving their way to the red planet.