Last week the children in one of the primary schools we visited surprised us with some fantastic space questions that they wrote down and brought to their Star Dome session. Here are their questions…and our answers!

Can you land on Mercury? 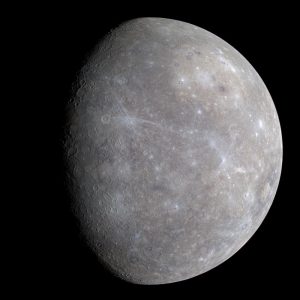 In short, yes, you can land on Mercury. Or, rather, with the right technology and equipment (that we don’t have at the moment) it is possible to travel to, land and even survive on Mercury. But in reality the smallest Solar System planet is one of the most difficult ones to visit – for both humans and robotic spacecraft. And here is why.

Problem 1: getting to Mercury

Mercury is a tricky target: the planet is small and very fast (a year on Mercury lasts only 88 Earth days). What’s more, Mercury is very close to the Sun.

But if you are heading towards the Sun, to visit Venus or Mercury, the Sun’s gravity will be making the spacecraft go faster and faster the closer to the Sun you get. Therefore you will need to hit the brakes really hard to avoid overshooting and crushing into the Sun itself. ‘Hitting the brakes’ means spending fuel. A lot of fuel. In case of a trip to Mercury, slowing down in time to intercept the planet will require more fuel than all the journey to the planet! That’s why all the robotic spacecraft heading to Mercury (and there have been 2 so far and one more is on its way) use very complicated trajectories (for more details see How to send a spacecraft to Mercury) and use what we call ‘gravity assists’ of other planets in order to get their speed ‘just right’ and take a very long time – 6 to 7 YEARS – to reach Mercury! That’s a bit too long for human astronauts, don’t you think?

Mercury has virtually no atmosphere, therefore we will not be able to use a parachute to land there, like we do when we land on Earth or on Mars. Instead, we would have to use rocket engines! Those engines would require a lot of extra fuel. To carry all that extra fuel from Earth, we would obviously have to launch much bigger rockets that would require even more fuel to lift off the surface of the Earth in the first place.

In addition to the extreme day-to-night temperature variation, Mercury has no atmosphere to provide us with breathable air, comfortable pressure [that our bodies are used to here on Earth] or to shield us from the harmful space radiation. Finally, the gravity on Mercury is only 38% of the gravity on Earth.

All in all, visiting Mercury, although difficult, dangerous, extremely expensive and very long, is possible! Would YOU like to go to Mercury?

How old is Mars?

Do any creatures live on Mars? Are there any plants on Mars?

In other words…is there life on Mars? This is the question we’ve been asking ourselves for many decades now. And yet, despite all the searching and exploration, we do not have the answer. Today Mars appears to be a cold barren desert and we can find no plants, animals or any other living creatures there. But we know that in the past Mars used to have liquid water on its surface. Perhaps that was the time when life thrived on the Red Planet?

The rovers that are exploring Mars right now are looking for the signs of life – past or present – on Mars and hopefully they will help find the answer!

Is it possible to live on Mars? Has anyone ever lived on Mars?

It is NOT IMPOSSIBLE to live on Mars. Although no human has ever been to Mars yet. To survive on Mars, we would have to figure out how to get water and breathable oxygen, how not to freeze, how to protect ourselves from space radiation and counter the effect of low gravity. We would have to learn to grow crops in the Martian soil, cope with isolation and overcome many other challenges. Scientists all over the world now work on developing technology that will one day allow us to visit and live on Mars. You can check where we are in solving some of these problems in our Blog post Human Journey to Mars.

How did the Solar System start? (How was the Sun made?) 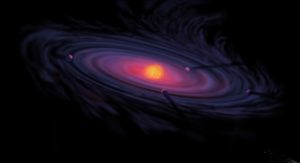 Our Solar System started as a huge cloud of gas and dust. Around 4.6 billion years ago this cloud got so big that it collapsed under its own gravity. (A ‘nudge’ from a nearby supernova explosion or other similar event probably triggered the collapse). The densest part in the cloud’s centre became the Sun while the rest of the material turned into a flat disk of ‘stuff’ swirling around the Sun.

With time, some of the material in the disk clumped together. These lumps grew bigger – like a snowball – and eventually became the planets 🪐 we know today. Not all ‘planet seeds’ turned into planets. Some were gobbled up by bigger seeds, some were thrown out of what we now know as the Solar System, some crashed into other seeds and got destroyed. The newborn Solar System was a very violent place.

Has anyone been to Uranus? 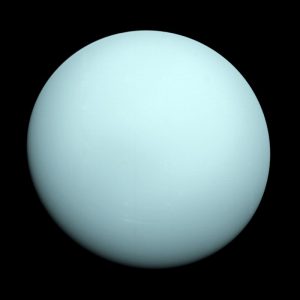 Image: Uranus as seen by Voyager 2 in 1986; Credit: NASA/JPL-Caltech

Planet Uranus is located – on average – 2.9 billion kilometers or 1.8 billion miles away from us. We say ON AVERAGE, because the orbits of the planets are not perfectly round, therefore the distances between them and the Sun change slightly throughout the planets’ year.

Just to compare, the average distance between the Earth and the Moon is ‘just’ 384 400 kilometers or 238 855 miles. In other words, Uranus is 754 times further away from the Earth than the Moon is! This makes it really difficult for us to explore the planet.

Sadly, no human has ever been near Uranus. Remember, Uranus is a gas planet, so landing there is out of question! In fact, only ONE robotic explorer, NASA Voyager-2 spacecraft, ’visited’ Uranus so far. On January 24th, 1986 it flew within 50 600 miles of Uranus (and yes, that’s more than the Earth-Moon distance away!) and studied the planet and its moons for about 6 hours as it zoomed past.

Another spacecraft, NASA’s New Horizons, crossed the orbit of Uranus more recently [in March 2011] while on its way to explore planet Pluto. At the time of the encounter New Horizons was asleep. Besides, Uranus was really far away from the spacecraft, so scientists did not wake it up to take any pictures

Do you think we should send a dedicated mission to explore Uranus and its moons? What would YOU like to learn about Uranus?

Why did Pluto get kicked off the Solar System?

First of all, you can rest assured that Pluto is still pretty much a part of the Solar System! Just as it was in 1930 when an astronomer called Clyde Tombaugh first spotted Pluto on the photographs of the starry sky. Just as it was in 2006 when astronomers voted to reclassify Pluto as a dwarf planet. And just as it was in 2015 when NASA’s New Horizons spacecraft (see above) performed the first-ever Pluto fly-by.

So while Pluto is still in the Solar System, we no longer call it a planet. It is now a dwarf planet! The decision to denounce Pluto from being a planet made many people sad. But it was the right decision nevertheless.

Pluto was always an ‘odd one’ among the Solar System planets. But when astronomers began to discover other ‘Pluto-like’ objects in the Kuiper Belt, an icy cold region in the outer Solar System where Pluto resides, they realized that those are a separate group of celestial bodies.

Astronomers came up with 3 criteria an object must satisfy in order to be a planet.

1 An object has to orbit the Sun

2 An object has to be in hydrostatic equilibrium. These fancy words simply mean that the body must be heavy enough to be pulled into a roughly round shape

3 An object has to clear its neighbourhood. That is the object’s gravity has to clear any other similar size bodies that might have been near its orbit.

While Pluto is round and is in orbit around the Sun, it is so small that it hasn’t cleared its neighbourhood. Therefore Pluto is a planet no more!

If you want to learn more about the planet vote and discovery of other dwarf planets, check out the book called How I killed Pluto and why it had it coming. It was written by the astronomer Mike Brown, the man who discovered several dwarf planets and is, you might say, partly responsible for the whole dwarf planet confusion.

How are the Mars rovers made?

Rovers are remote controlled cars that scientists use to explore and examine other worlds. Each rover carries a set of cameras and science instruments designed to test different things. The first rover to reach another celestial world was not a Mars rover, but a lunar rover called Lunokhod-1. Made in the Soviet Union, this rover touched down on the Moon in 1970 and worked on the lunar surface for almost a full year!

The first rover to visit Mars was called Sojourner. Built by NASA, this tiny 6-wheeled ‘drawer-sized’ machine touched down on Mars in 1997. Sojourner explored the Red Planet for 3 months before its battery failed. Next came NASA’s Spirit and Opportunity, the twin rovers each as big as a golf car. They arrived on Mars in 2004: Spirit worked for over 6 years, while its sibling, Opportunity, remained operational for over 14 years. Curiosity, NASA’s next remote controlled explorer, arrived at Mars in 2012. The rover is still operational today! Finally, in February 2021 the latest NASA rover, Perseverance, touched down on Mars closely followed by the first Chinese rover Zhurong.

With each rover successfully sent to Mars scientists learn something new about how to drive, drill and explore the Red planet remotely. So while the new rovers borrow from the design of their predecessors, there are always modifications and improvements! For example, the cars get bigger, the wheels get larger (in diameter) and thicker, nuclear batteries replace solar panels, the software gets much more sophisticated.

Every rover part and every instrument we install on the rovers first get tested – in the lab and in special Mars-like location on Earth – over and over again. When engineers are happy with the result, the rover is put inside a rocket and launched into space. Would you like to become a space engineer?

Check out this short video of Perseverance being assembled and tested!

Do you have a question about space? Ask us in the comment section below or contact WonderDome team via our web site http://wonderdome.co.uk. We would love to hear from you!