In Part 1, we looked at the beginnings of radio astronomy and at radio observatories.

This time we explore the imagery and important discoveries of the science.

Optical telescopes are ‘big eyes’. The photographs they produce use visible light.

But radio telescopes deal with radiation invisible to our sight.

So how do they produce images that we can see? 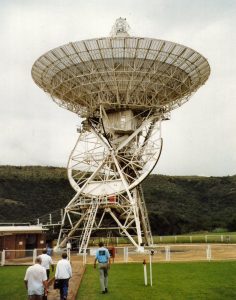 The most recognisable radio telescope is a parabolic dish.

Radio waves from objects in space hit the telescope dish.

The parabolic dish focusses the waves on to a secondary reflector above the dish.

The signals are reflected to an antenna, then to an amplifier for enhancement.

Finally a computer analyses and displays the results.

To produce an image, the computer divides the signal area into squares called pixels.

It allocates a number to each pixel according to the strength of the  signal.

The higher the number, the stronger the signal.

Zero means no signal at all.

Then a colour is then assigned to each number.

The computer fills in the colours and the image is ready for display and analysis.

Central region of Cygnus A.  Credit: B. Saxton NRAO/AUI/NSF

You can make your own radio image with the help of NROA, The National Radio Astronomy Observatory in the USA.

All you need is a set of crayons and then click NRAO.

Radio waves are long. They need big radio telescopes to pinpoint radio sources in the sky.

A clever way to make radio telescopes bigger is to link them together in an array.

The Karl Jansky Very Large Array in New Mexico, USA does just that. 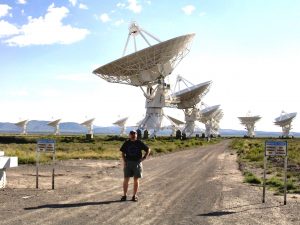 The VLA has 28 movable dishes mounted on rails.

They spread out in three possible patterns across the desert.

Then they all focus on the same radio source.

A supercomputer combines their signals and the array acts a single instrument.

At its biggest, the VLA creates a virtual radio telescope 22 miles across!

It produces images much more precise and clear than any single dish.

The European VLBI Network takes the idea even further.

This project links 22 radio telescopes in Europe and Asia and can include others in South Africa and Puerto Rico.

As a result, it makes a virtual instrument as big as the Earth!

So they open up a range of objects that we simply cannot see with optical instruments.

Here’s my selection of discoveries which have changed our understanding of the universe.

In August, 1967, student Jocelyn Bell was looking at data from a radio telescope at Cambridge, UK.

She found a radio signal that pulsed every 1.33 seconds. Nothing like it had been detected before.

The signal was tracked down to the Crab Nebula, the remains of a star that exploded long ago.

Other similar objects were found and became known as pulsars. 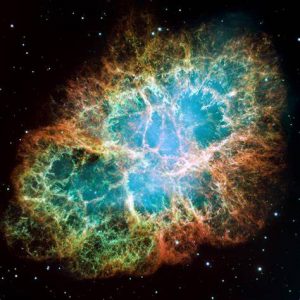 We now know that pulsars are rapidly rotating neutron stars.

As they spin, beams of radiation are given out.

So radio telescopes pick up their signals as pulses.

A neutron star is created when a supergiant star explodes as a supernova.

The star’s core is crushed by gravity to make a ball of neutrons about 20 km across.

A neutron star is so dense that a teaspoonful would weigh around 1 billion tons, the weight of Mount Everest!

Quasars are the most distant objects that we can detect.

Because they are so far away, their light has taken billions of years to reach us.

So we see them as they were long ago.

Quasars were detected as strong radio sources in the 1950s.

When optical telescopes found the objects, the looked like stars. But they were not stars.

They are the active centres of young galaxies.

A supermassive black hole at their centre powers their intense radiation. 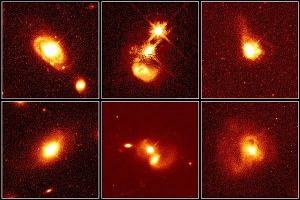 The discovery of quasars showed that the universe was different in the past.

This supported the Big Bang theory and was a nail in the coffin of the opposing Steady State theory.

The Big Bang theory was strengthened further in 1964

With their radio telescope, they detected noise coming from all parts of the sky.

At the same time a group of astronomers just 60 miles away at Princeton University were theorising about the Big Bang.

They realised that the original radiation from the creation of the universe should be in the form of microwaves.

Penzias and Wilson had found that radiation.

The microwave radiation indicates a temperature of  3 degrees Kelvin, minus 270 degrees Celsius.

The Big Bang theory predicts this temperature for the universe now..

So Penzias and Wilson had detected the echo of the Big Bang, the creation of our universe 13.8 billion years ago.

More recently satellites like COBE and WMAP have produced detailed maps of the background radiation. 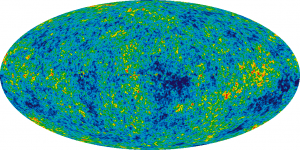 The variations show a slight difference in density that enabled galaxies to grow.

A black hole is the collapsed core of an exploded star.

It is a stage further than the collapse that creates neutron stars.

Gravity collapses many Solar masses into a tiny space, a singularity..

The gravity of the singularity is so great that nothing can escape, not even light.

This creates an area of darkness about a kilometre across. This is the black hole.

In April 2019, the first ever image of a black hole hit the headlines. 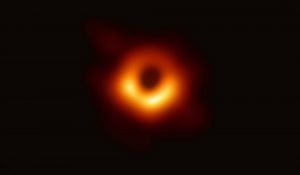 This remarkable image was produced by the Event Horizon Telescope Collaboration .

This organisation brings together radio telescopes from all over the world.

Together they record a single object and a supercomputer combines the data into a single image.

This historic image shows a supermassive black hole at the centre of galaxy M87.

It weighs in at 6.5 billion times the mass of our Sun!

These four discoveries give a glimpse of the contribution of radio astronomy to our understanding of the cosmos.

Radio astronomy has literally given us a new view of our universe.