Origami, an ancient Japanese art of paper folding, dates back hundreds of years. Once a craft for the religious and elite, it is now a popular recreational activity all over the World. But not only paper cranes and flowers can be made using origami techniques. It turns out the famous “creasing and folding” can be applied to the engineering constructions too. Some of these origami-style devices are unfolded inside a human body and some – in Space!

It is said that paper was invented in China and then brought to Japan by the Buddhist monks. As the material became widely available, paper crafts made of a single sheet of folded paper, without cutting or gluing, became very popular, though patterns remained a few.

The renaissance of the craft occurred in the 20th century thanks to the work of Akira Yoshizawa, the “grandmaster of origami”. He created the language of origami instructions (various lines and arrows) to describe the folding process. Modern origami still speaks this language, known as Yoshizawa-Randlett System.

Lately, mathematicians became very interested in origami, especially in the kind that can be flat-folded, like, for example, a paper crane. They developed mathematical tools to describe origami constructions and derived laws that govern whether or not a particular shape can be folded flat (for more details see Flat-Foldability of Origami Crease Patterns).

A new branch of paper folding art, called origami tessellation, came into being in the 1960s. It quickly gained popularity among craftsmen, artists and engineers. Tessellation means tiling a surface with shapes so that there are no gaps or overlaps. And, applied to origami, it allows to transform a flat sheet of paper into a 3D mosaic.

The most famous example of origami tessellation is Miura fold, or Miura-ori fold. It was developed in the 70s by Koryo Miura, the Japanese astrophysicist who worked on solar arrays for JAXA satellites. Using Miura fold one can fold a piece of paper into a smaller area and then unfold it in a single movement. When unfolded, the Miura pattern looks like a mosaic made of rows of parallelograms. 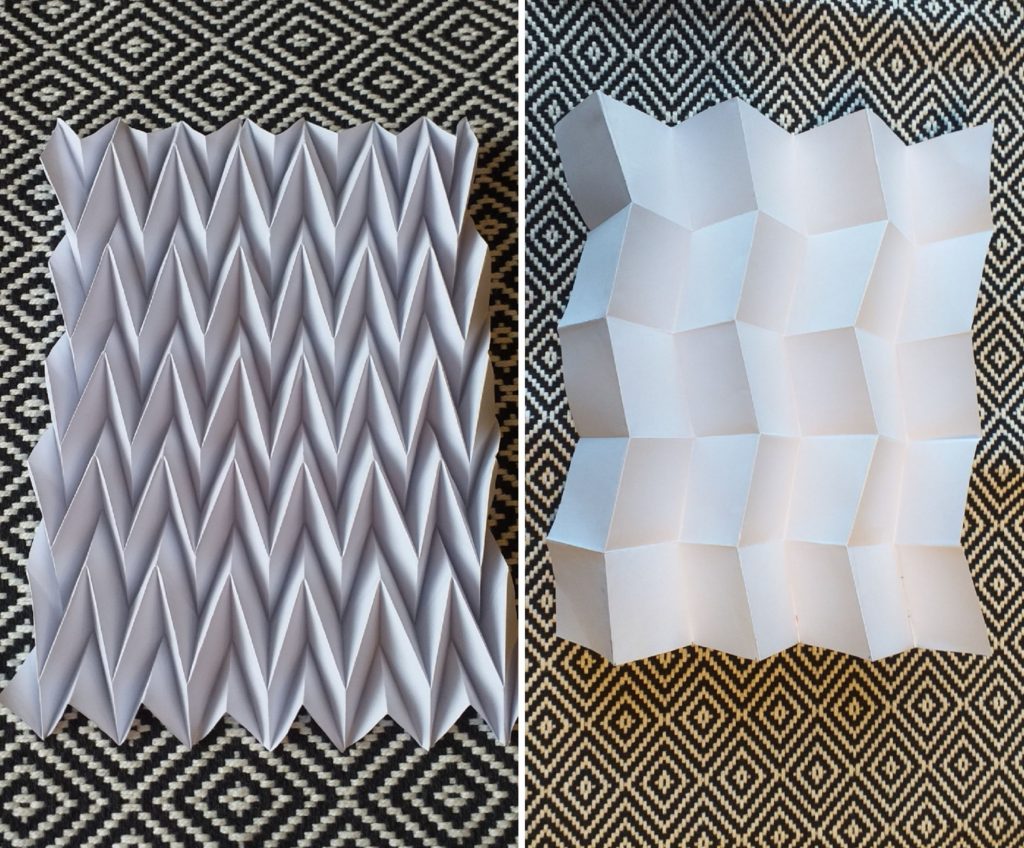 Miura fold is an example of the so-called rigid origami. That means the facets of the Miura origami structure remain flat and deflection happen only at creases.

What if instead of paper you want to fold thick stiff material that cannot be bent, like glass or metal?

You can do that using rigid origami. Of course, you cannot simply crease and fold a sheet of glass. But you can use separate panels and join them with some sort of hinges to “create” a fold. It will not be the same as a a single sheet origami, but the model will move in the exact same way.

We will demonstrate the transition from paper to thicker material (cardboard) using a very simple tessellation fold, called square twist. 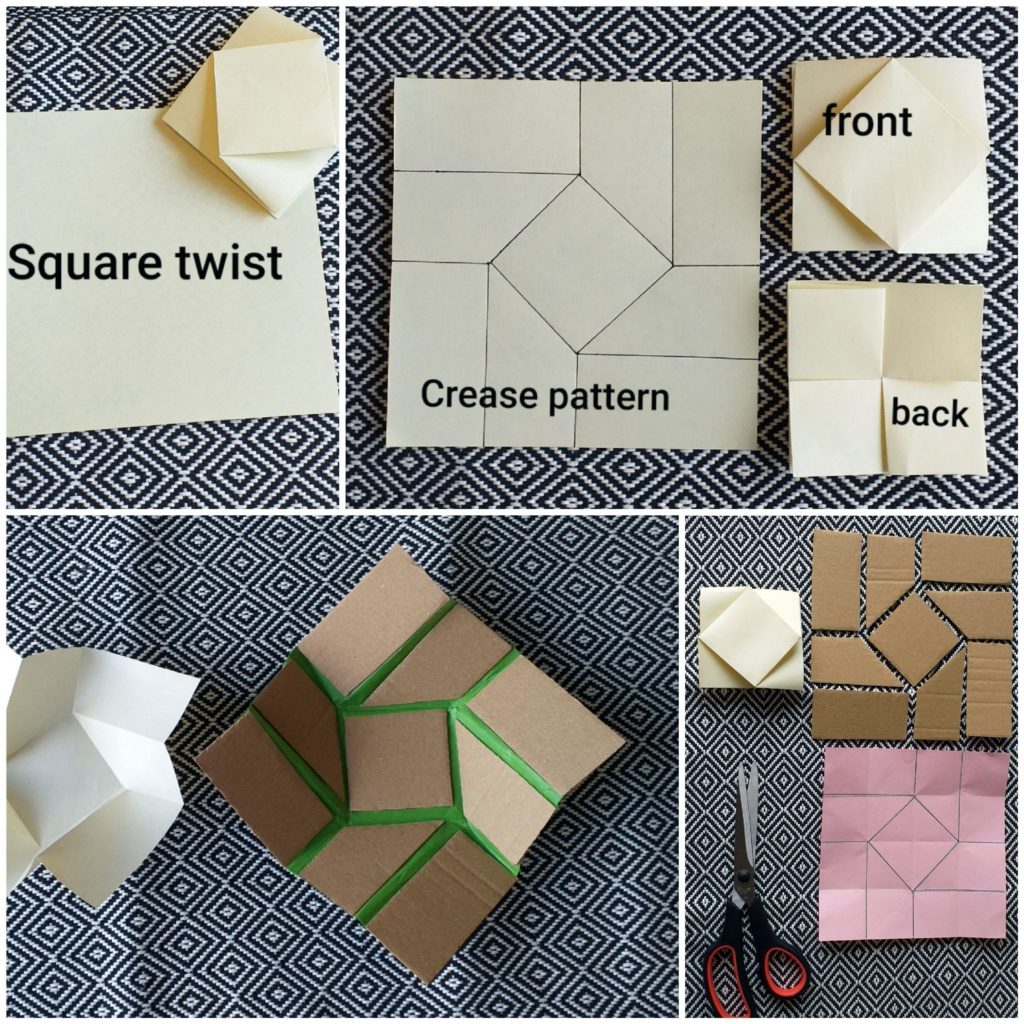 Image: Here we make origami Square Twist, first thin (paper) and then thick (cardboard). To adjust for the thickness of the cardboard, we use separate panels and join them with tape. The resulting model behaves just like the paper one, i.e. folds flat and unfolds in one move.

Designs based on rigid origami, especially Miura fold, are used in many paper and non-paper projects, from folding maps and making dresses to creating moving parts in buildings and packing solar panels.

Why using origami structures in Space?

Imagine you want to launch a satellite that will be using solar power as the source of energy. The solar panels are usually big, because to gather more sunlight, you need bigger surface area. But they must be packed small and stowed away for launch as the payload space inside a rocket is limited. That leads to a question: what’s the best way to pack solar panels? (By the way, the same problem applies to packing solar sails, sun shades etc)

Of course you can fold your panels into a bundle with a square base and unfurl it after the launch. But the unpacking will require many movements in different directions that are tricky to execute in space. That’s when origami comes to the rescue! Origami-style packing will allow you to unfold your panel in one continuous movement, such as turn or pull.

One of the first origami constructions to fly into space was the Japanese Space Flyer Unit mission in 1995. The spacecraft had a solar array paddle that was folded using Miura fold. The paddle was meant to be unpacked in orbit and then folded back at the end of the operation so that the spacecraft could be retrieved by the Shuttle Endeavor. The task was a partial success. Initially, the solar array was deployed and generated power as expected, but it failed to fully retract at the end of the mission and had to be jettisoned. Further analysis showed that it happened because two panels got slightly bent.

Several other deployable structures have already made it into space, including solar sail on the Japanese microsatellite SPROUT and a giant solar kite IKAROS. But that’s just the beginning! It looks like there will be many more origami-inspired space designs in the near future. That is very exciting!

Imagine a telescope made of of two spacecraft flying several kilometers apart. One – smaller – spacecraft acts like an eyepiece. Another – bigger one – as a light-gathering lens, the eye of the telescope. This eye is giant, 25-100 meters in diameter, and is made of thin membrane that is packed flat and deployed in orbit.

That’s the idea behind the Eyeglass Space telescope. The technology was successfully tested, first with 75 mm eye and more recently with 5 meter eye.

When we want to take pictures of the Sun’s corona or see faint objects (like comets) that otherwise hide in the Sun’s glare, we use an instrument called coronagraph. Coronagraph is a telescope with a focal mask that blocks the central parts of the Sun. We can build a similar instrument to study other stars, a stellar coronagraph, to look at, for example, exoplanets. To achieve the same result with a space telescope, we can, too, place a mask inside a telescope.

But NASA scientists are currently looking into another possibility, namely to send a mask to fly ahead of a telescope! The project is called STARSHADE and it also uses origami to pack and unpack the flower-shaped shade.

The biggest challenge of this design is to keep a telescope and a shade – flying far away from one another-  perfectly aligned. Just to give you an idea: NASA engineers estimate that a 2.4 meter telescope will require a 26 meter shade to be placed 25 000 miles ahead of the telescope with a precision of 1 meter.

Do you want to know what this origami parasol will look like and how it will work? Make our own starshade using this awesome print-out pattern!