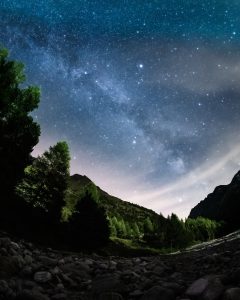 The winter constellations marshalled by Orion are now sinking in the west.

They are being replaced by our Springtime stars, centred around the celestial lion.

Our star maps come from Stellarium, the software we use in Wonderdome planetarium.

Stellarium shows you the stars on any night, past, present or future from any location.

It is a superb programme and free to download.

High above we see the familiar shape of the Plough, aka the Big Dipper.

The Dipper is part of the constellation Ursa Major, the Great Bear.

Now is the best time to draw the bear, while she is in the darkest part of the sky. 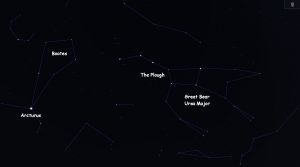 The Dipper handle is the bear’s tail and the spoon is part of her body.

To the right, a triangle of stars makes her head.

Below, two lines of stars make her legs.

Her tail, the Dipper handle, points to the red star Arcturus, which we’ll talk about later.

But, as ever, the best star action is in the south.

Here are the best of the Springtime constellations. 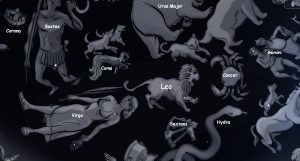 The images from Stellarium show the main constellations of Spring.

At the centre is Leo the Lion. To his right we see Cancer the Crab and to his left it’s Virgo the Maiden.

Above Virgo stands Bootes the Shepherd.

Now let’s take the pictures away and look at the constellation outlines. 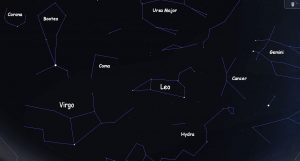 Leo is a distinctive star pattern.

The Lion’s head is like a backward question mark, with his body and tail to the left.

The lion is gazing hungrily at Cancer the Crab, a dim letter ‘X’ of stars.

Below and left of Leo’s tail is the ‘V’ shape of Virgo, with more stars trailing left.

Above Virgo, a cone shape of stars makes Bootes the Shepherd.

Straggling below Leo are the stars of Hydra the water snake.

Although Hydra’s stars are dim, they make the largest of the 88 constellations.

Now let’s look at some of the prominent stars. 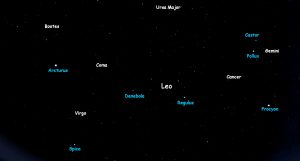 At the base of Leo’s question mark lies Regulus, ‘The King’s Star’.

It’s called that because it lies on the ecliptic, the path of planets across the sky.

Regulus is a hot blue-white star some 80 light years away.

It’s brilliance hides three small stars that are part of a quadruple system.

Regulus spins round incredibly fast, at around 700,000 miles per hour!

It is about 15 times brighter than our Sun, shining some 36 light years away.

Denebola is a young star – only 400 million years old!

Arcturus lies at the base of the cone of stars making Bootes the shepherd.

It is the fourth brightest star in the night-time sky and about 37 light years away.

Arcturus is a red giant, a dying star.

It weighs in at about the same as our Sun but is 25 times bigger, with a diameter of 35 million kilometres. 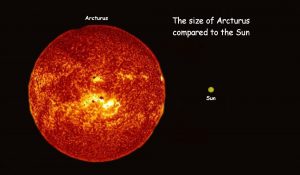 Arcturus and the Sun.   Credit: NASA

Below Arcturus we see the blue light of Spica, the brightest star in Virgo.

Spica is 250 light years away and is made of two stars, a binary pair.

These stars are so close together that their gravity pulls each star into an egg shape.

Hidden among the Springtime stars is a delightful star pattern.

The trouble is that you need a really dark sky to see it.

So, if you can escape the glare of city lights, we have a challenge for you.

It is to find an ‘Eiffel Tower’ of stars. 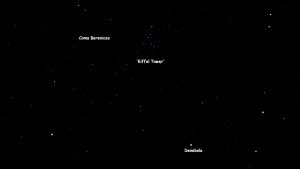 First find Denebola, the lion’s tail. Then look above and a touch to the left.

The stars here belong to the tiny constellation of Coma Berenices, ‘Berenice’s hair’.

A group of these stars make a beautiful cluster which looks like an Eiffel Tower.

To see them better, look slightly away from them, left and right.

As you look away, the stars appear brighter.

You are using averted vision. The edge of your eyes sees dim light better than the middle.

By looking slightly to the side, the tower will jump into view.

As an extra dimension to the springtime sky, April sees a good meteor shower.

The Lyrid meteors are active from April 16th to 25th. They peak on the night of 22nd to 23rd April.

This shooting star display was recorded 2,500 years ago by the Chinese.

The debris that gives the meteors comes from Comet Thatcher.

This comet will be visible again in 2276. What will Earth be like then, I wonder?

To see the shooting stars, find a dark place away from the direct glare of street lights.

It’s fairly antisocial viewing. Most meteors are seen after midnight, when the constellation Lyra gets higher in the sky.

With luck and and a clear sky, you may see up to 15 shooting stars in an hour.

When the Titanic sank on April 12th, 1912, survivors in lifeboats saw Lyrid meteors in the crystal clear sky.

Appropriately, some cultures view shooting stars as the souls of the dead making their way to heaven.

I simply prefer to make a wish on a shooting star.

And my wish today is that you have clear skies to enjoy the stars of Spring.