On January 1st, 1801, Italian astronomer Giuseppe Piazzi looked through his telescope and saw a new world.

He named his discovery Ceres. This new world would become the first asteroid.

But the discovery was no accident. A bizarre mathematical formula had predicted its discovery over forty years earlier.. 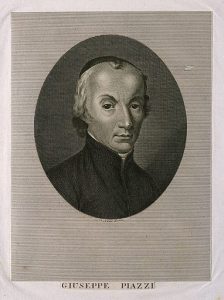 Ceres orbits the Sun between Mars and Jupiter. It’s existence had been predicted in 1766 by Bode’s Law.

Amazingly, these numbers closely matched the known distances of planets from the Sun.

Bode’s Law is now seen as a mathematical oddity. But it inspired 17th Century astronomers.

They saw the gap in the Solar System. Bode’s Law predicted a planet at 2.8 AU but no such planet had been seen.

In 1800 a group of European astronomers began the search for the missing planet. They called themselves ‘The Celestial Police’.

One of the force was Giuseppe Piazzi. On New Year’s Day, 1801 he discovered the missing world.

He named it Ceres for the Roman goddess of corn and harvests.

Ceres did not stay alone for long. Astronomers found other worlds close by.

Pallas, Juno and Vesta soon followed. By 1849, ten such bodies had been found.

Clearly there was no single planet in the Bode gap. Instead there were many smaller worlds.

The discovery of more asteroids followed quickly. Soon there were hundreds, then thousands.

It became clear that there were numerous asteroids orbiting the Sun between Mars and Jupiter.

This is the Asteroid Belt. We now know that the zone contains millions of asteroids.

Astronomers view asteroids as significant bodies. They represent the original material that formed the Solar System some 4.6 billion years ago.

The gravity of Jupiter stopped them coming together to form a planet. 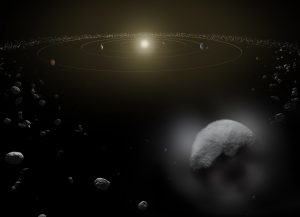 Most asteroids are lumps of rock and iron measuring just a few metres, the size of a car.

But between one and two million are larger, over 1km across.

The four largest asteroids, Ceres, Vesta, Pallas and Hygeia contain about half the mass of the belt.

However, if we lumped all the asteroids together, they would make a very small world. It would be less than a tenth the size of our Moon.

The discoverer of an asteroid is allowed to give it a name. Piazzi chose Ceres so it is (1)Ceres.

At first, the names were of Roman goddesses. But as discoveries increased, asteroids received all kinds of names.

They include artists, scientists, pop stars and fictional characters.

Which of your favourites have an asteroid named for them?

Over the years, asteroids have had several collective names. They became ‘Minor Planets’ as well as asteroids.

Now the favoured nomenclature is ‘Small Solar System body‘. This includes comets too.

However Ceres stands out because of its size and shape.

It is 950km in diameter and spherical in shape. It has recently been upgraded to a ‘Dwarf Planet’.

In 2015, the Dawn robotic space probe arrived at Ceres. It went into orbit round the dwarf planet.

And this proved to be the case. 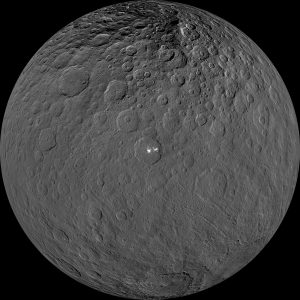 However there were surprises. Most obvious were the white markings in an impact crater named Occator. 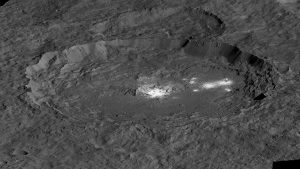 Astronomers determined that the white areas are salt deposits.

There may be a reservoir of brine, salt water, deep below the surface.

Deep fractures caused by the original impact may allow the brine to leak to the surface.

You can replay Piazzi’s discovery if you have a telescope.

Download Stellarium, the planetarium software, and search for Ceres.

If you find the elusive world, it will look like a dim star. Unlike any star, it will move slightly from night to night.

When Piazzi first saw his new world, he could never have imagined the close-up pictures we have in our blog.

I think he would have been pleased!