Recently in Wonderdome planetarium, a Year 5 child asked ‘Why do the planets spin round?’

Like many simple questions it has a complex answer.

So, just why are all the worlds in a spin? 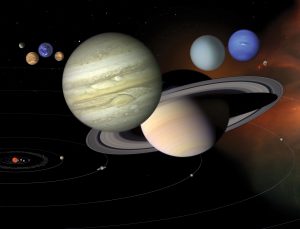 The question relates to the rotation of a planet around its axis.

We’ll concentrate on this motion now.

In a future blog we’ll look more closely at orbital movement around the Sun.

Planets spin round at different speeds.

This means that their day length is different. 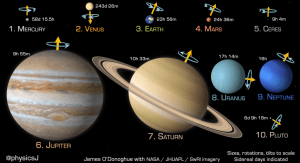 Days in the Solar System

The table below shows the time each planet takes to rotate once on its axis.

The planets are in order of their distance from the Sun.

*The planets spin anticlockwise, from west to east.

The two exceptions are Venus and Uranus which spin backwards.

A quick analysis shows that Mercury and Venus rotate slowly, taking days to spin once.

The rest spin round in a matter of hours.

So we have to not only explain why planets spin but why they spin at different speeds.

Formation of the Solar System

To explain why planets rotate, we must go back to the creation of the Solar System.

Over 5 billion years ago there was no Sun, there were no planets.

Where we are now there was a huge cloud of gas and dust, a nebula. 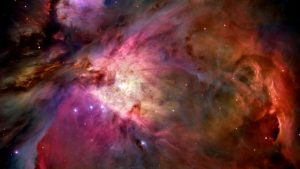 The gas was mainly hydrogen, mixed with some helium.

The dust came from stars which had died and blown material into space.

The gas and dust began to collapse under its own gravity.

As it collapsed inwards, the gas grew thicker and hotter.

Eventually the hydrogen would get so dense and hot that it formed a star, our Sun,

That nuclear furnace has made our Sun shine for the last 5 billion years.

A spinning disc of debris

But some gas and dust was left over, outside the embryo Sun.

Randomly, some of the dust became thicker than its surroundings.

The gravitational imbalance caused parts of the cloud to move differently to the rest.

The whole cloud of gas and dust began to spin slowly. 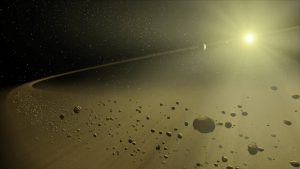 As the cloud continued to collapse and get smaller, the rate of spin increased.

Think of  ice skaters doing a spin. As they pull their arms in, they spin faster.

This spinning motion changed the more or less spherical cloud to become a rotating disc.

Then came the planets

By the time the Sun was formed, the material left over formed a disc around the Sun.

Some parts of the disc randomly became thicker than their surroundings.

These areas had increased gravitational pull. They drew in more gas and dust

Planets were formed from these gravitational eddies in the cloud. 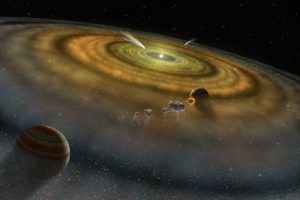 Artist’s conception of a solar system in formation.,

Dust close to the Sun formed the small rocky planets.

These planets moved from the angular momentum of the rotating disc.

They took up orbits around their star.

But each planet had its own movement from its creation.

Each planet began to spin around its own axis.

The rotation of each planet mirrored the movement of the spinning disc of debris.

The disc was spinning around the Sun in an anti-clockwise direction.

The planets spun in the same way from west to east.

At this point, it’s useful to look at the diagram again.

Each planet was created individually so each one had its own unique rotation period.

Planets will continue spinning because in the vacuum of space, there is nothing to slow or stop them

However over the last 4.6 billion years, the spin of some planets has changed.

Mercury’s rotation has been changed by the gravitational pull of the Sun.

It now rotates once every 58 days and orbits the Sun in 88 days.

It is locked in a 3:2 tidal resonance with the Sun: for each three rotations, it orbits the Sun twice.

Venus rotates even more slowly, taking 243 days to spin once.

That’s longer than the 227 days Venus takes to orbit Sun.

So the day on Venus is longer than its year!

And even more oddly, Venus rotates backwards from east to west.

This may be due to Venus colliding with another embryo planet after it was made.

Our Earth’s day has got longer over time.

The culprit for the slowing is our Moon.

Tidal forces of the Moon have gradually slowed the spin of the Earth.

In doing so, the Moon’s rotation has become tidally locked with Earth.

As a result the Moon always keeps the same side facing us.

The day on Mars is around 40 minutes longer than our day.

When astronauts arrive there, days will be like home, in length at least. 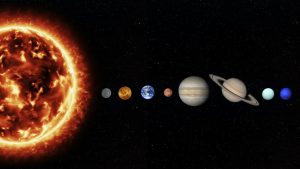 This is probably because they formed in a different way.

They formed from gas in the disc.

So the giant planets spin the fastest.

Although Uranus spins quickly, like the other giant worlds, it spins on its side.

Its axis is tilted by over 90 degrees.

The likely reason for all this is that billions of years ago, Uranus was hit by another planet.

So there’s my answer to that simple question ‘Why do planets spin round’.

It shows that such simple sounding questions lead to quite complex and fundamental answers.

It’s one of the joys of being a planetarium presenter.