Orbiting the Sun at an average distance of 58 million kilometers, Mercury is the closest planet to our star. It is also the fastest and the smallest of all the Solar System planets and one of the most extreme worlds you can imagine. The tiny rock is full of surprises. See for yourself!

Everybody knows that Mercury has no atmosphere. After all, the small planet’s gravity is too weak to hold on to any and significant amount of air. But, technically, that is not true. Mercury does have some atmosphere, if only a tenuous one, made of hydrogen, helium, oxygen, sodium, magnesium and calcium.

Some of these particles are solar wind trapped by Mercury’s magnetic field. Others are material knocked out from the planet’s crust by solar wind and micrometeorites.

Astronomers use the term EXOSPHERE to describe such thin atmospheres found around some planets and moons. Our Moon has an exosphere too.

Things can get pretty warm out there, 58 million kilometers (36 million miles) away from the Sun. The temperature on the sunlit side of Mercury reaches 430 degrees Celsius. Only one planet, Venus, can get even hotter than that. But unlike Venus, the almost air-less Mercury cannot hold on to its heat. As the night comes, the temperature on the planet’s surface quickly plunges as low as -180 degrees Celsius.

Now that you know that Mercury has a chilly side to it, you won’t be so surprised to hear that there is WATER ICE on the planet’s poles. Mercury rotates nearly straight, meaning that some deep craters near the planet’s poles remain in permanent shadow – perfect conditions to store some ice! 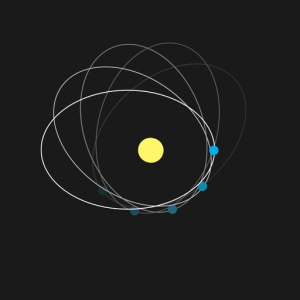 Mercury has a highly eccentric (oval-shaped) orbit. Not only that, but the orbit’s perihelion – the closest point to the Sun – moves, or precesses, around the Sun. (Strictly speaking, this is true for all the planets, including the Earth, and even for the Moon) The unusual behaviour of Mercury’s orbit has been known since the 1850s. It was attributed to the combined gravitational pull of other planets as well as to the perturbations caused by the not-quite-spherical shape of the Sun. Translated into the classic equations of the orbital motion, these effects predicted the value of precession to be 5557 arcseconds per century. That was close enough, but did not match exactly the observed value of 5600 arcseconds per century. The 43 arcseconds remained unaccounted for.

When Einstein introduced his Theory of General Relativity in 1915, he theorized that Mercury should experience an additional precession because it moves through a warped spacetime. He calculated the value of the precession of Mercury’s perihelion due to relativistic effects to be… 43 arcseconds per century. The very 43 arcseconds that Newtonian gravity was unable to explain!

The successful prediction of the behaviour of Mercury’s orbit was the first test of General Relativity. Today, over 100 years after it was presented, the Theory still stands. For now.

Being the closest planet to the Sun, Mercury is really fast. It zooms around the Sun at a neck breaking speed of up to 200 000 kilometer per hour and completes one orbit in just 88 days. For a long time scientists thought that Mercury is tidally locked with the Sun, i.e. the same side of the planet always faces our star. But in 1965 astronomers at the Arecibo Radio Telescope in Puerto Rico used the telescope’s powerful radar to send a radio beam to Mercury. By measuring the signal reflected off the surface, i.e. how ‘redshifted’ the side rotating away from us was and how ‘blueshifted’ the side rotating towards us was, they determined that Mercury completes one turn around its axis in just 58.7 Earth days.

This 58.7 day period is what we call a sidereal day (one turn around one’s axis), and not a solar day (one turn in respect to the Sun). On Earth the two are practically the same thing: our planet takes 23 hours 56 minutes to rotate (sidereal day) and the Sun returns to the highest point in the sky in your location every 24 hours (solar day). But on Mercury things are different. A solar day there lasts 176 Earth days. That’s how long you will have to wait for the next sunrise! Longer than a year!

Now, how about Mars and Venus? Read our post  How long is a day on the inner planets? and find out!

The climate on the closest planet to the Sun varies throughout the year. But for a different reason than on Earth! The Earth’s orbit is nearly circular. As a result, our planet always stays about the same distance from the Sun. The temperature variations here are associated with seasons, i.e. with the tilt of the Earth’s axis. For Mercury, the situation is the opposite. The smallest planet orbits the Sun almost straight, so that there are, technically, no seasons. The season-like variations occur because the planet has a highly eccentric orbit. As a result, the Sun-Mercury distance (and the amount of sunlight that reaches the surface) changes over the course of one year.

The Solar System’s four rocky planets vary not only in size, but also in density. The Earth has the highest mean density of 5.5 g/cm³ followed by Mercury (5.4), Venus (5.2) and finally Mars (3.9). We might think that the Earth’s high density indicates that our planet has the largest core (as that’s the densest part). But that is not true.

You see, one way to make a material more dense is to compress it. Because the Earth is way more massive than Mercury, its interiors are squeezed by the sheer weight of the layers above. That’s why when astronomers talk about density, they often use a characteristic known as UNCOMPRESSED DENSITY, that is mean density with the effect of the gravitational squeezing removed. It turns out that the planet with the highest – by far – uncompressed density is…Mercury! And it is Mercury that has the largest core: up to 50% of the planet’s volume. To compare, the Earth’s core is only 17% of the volume.

So why is Mercury’s core so big? We don’t know. In fact, according to our theories of how planets form, that should not be the case. One of the explanations most scientists agree on is that a long time ago a massive protoplanet crashed into Mercury stripping it off some of the outer layers. Ouch!

Why do we know so little about the closest planet to the Sun? Well. turns out Mercury is surprisingly difficult to send spacecrafts to. So far only two robotic explorers, Mariner 10 and MESSENGER, visited the small planet and the third one, BepiColombo, is on its way. Here is How to send a spacecraft to Mercury.

Do you have any questions about Mercury? Please let us know in the comments below! And don’t forget to visit our mobile planetarium for a virtual tour of the Solar System planets and moons! We can bring an inflatable star dome  to a venue of your choice and offer a space show suitable for YOUR event and audience. To learn more about us and our Prices and Booking, go to https://wonderdome.co.uk