What is the closest black hole to the Earth? How far away is the nearest exoplanet? How long is the journey to the ‘next-door’ galaxy? Which brown dwarf is the closest to the Sun? Let’s meet our cosmic neighbours!

Although Proxima Centauri is relatively close to us, it is too small and dim to be seen with a naked eye. That being said, the Southern Sky observers can easily spot its companions – to an unaided eye they appear as one star!

Proxima b is only slightly heavier than the Earth and orbits within its star’s Goldilocks Zone!

Most recently, SETI Breakthrough Listen project detected a radio signal (dubbed BLC1 or Wow! signal 2020) that is thought to originate from the direction of Proxima Centauri. While the alien origin of the signal seems unlikely, Proxima Centauri system remains an object of great interest for both SETI enthusiasts and science fiction writers. 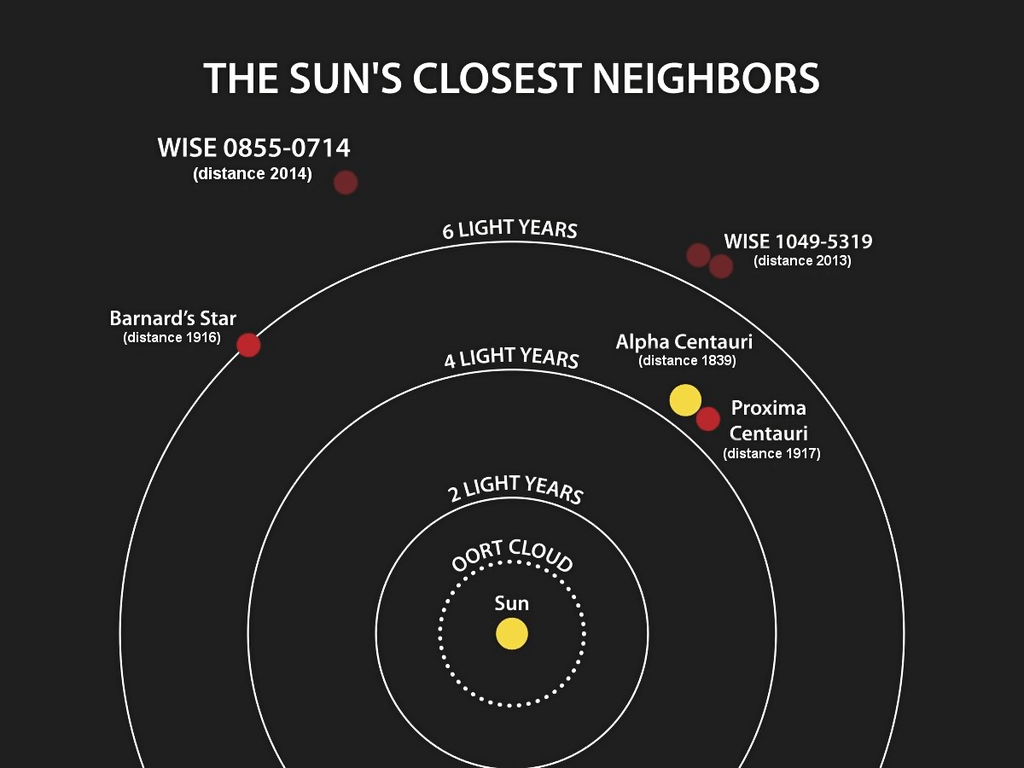 Image: This diagram illustrates the locations of the star systems closest to the sun. The year when the distance to each system was determined is listed after the system’s name. Credit: NASA/Penn State University

Brown dwarfs are often referred to as ‘failed stars’. These are the objects that occupy a niche between giant planets and small stars. Their masses range from 15 to 70 times the mass of Jupiter, which is not heavy enough to sustain hydrogen fusion in their cores (although they can briefly burn other elements). Brown dwarfs give off very little light (they shine mostly in infrared) and therefore are hard to detect. The nearest known brown dwarf is Luhman 16A. It is part of a brown dwarf binary with the 2nd companion, Luhman 16B, also a brown dwarf.

A mere 3 000 light years away from the Earth lies an object you will not want to get too close too. A black hole! Designated V616 Monoceros (or A0620-00), this is in fact a binary system. A0620-00 is composed of a STELLAR* black hole 6.6 times more massive than the Sun and a small main sequence star ½ the Sun’s mass. Our Galaxy is home to thousands of these ‘cosmic monsters’, but to date only a handful of them have been discovered.

Note: Black holes come in different sizes. The object A0620-00 is thought to be the closest stellar black hole to the Earth. The closest SUPERMASSIVE BLACK HOLE is located in the centre of our own Milky Way Galaxy, a safe 26 000 light years away from us. For more information on black holes of different sizes and their origin please see Black Holes: the size matters!

In 2020 a black hole candidate, HR 6819 (aka QV Telescopii), has been discovered 3 times closer to home, at a distance of only 1000 light years away from the Earth. This object was thought to be a member of a triple star system. It’s existence was proposed in order to explain the strange orbits of the two other stars. The data was later re-analyzed and astronomers concluded that the star system does not include a black hole after all!

You would think that it should not be difficult to find the closest galaxy to the Earth. After all, it is supposed to be bright AND close by. But the title of our nearest galactic neighbour has been passed on several times in the recent decades. Initially it belonged to the Large Magellanic Cloud, an irregular dwarf galaxy situated 170 000 light years away. Then, in 1994, astronomers spotted the Sagittarius Dwarf Galaxy ‘just’ 70 000 light years away from the Sun. Finally, in 2003, the Canis Major Dwarf Galaxy was discovered. Well…sort of.

At a distance of 25 000 light years away from the Sun, the Canis Major Dwarf Galaxy – if it exists – is our Milky Way’s nearest neighbour. This small irregular galaxy is so close to the Milky Way that it is being pulled apart by our Galaxy’s strong gravity. The Milky Way even steals stars from its unfortunate neighbour! A long string of stars that wraps around the Galaxy 3 times – this structure is known as Monoceros Ring – is thought to be the result of this gravitational interaction between the two.

But some astronomers argue that Monoceros ring is a structure within our own Milky Way. They insist that there is no dwarf galaxy in the Canis Major region. Who is right? We don’t know! The debate is ongoing! If you want to dig deeper,you will find a great discussion on the possible sources of the Monoceros Ring material in the paper On the origin of the Monoceros Ring – I. Kinematics, proper motions, and the nature of the progenitor.

As we continue to explore space, we discover new cosmic neighbours. What will we find next?

Visit our inflatable Star Dome to learn more about the Universe! Questions? Comments? Let us know in the comments below.