Globular star clusters are some of the most spectacular deep space objects. 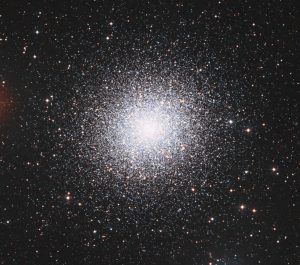 They can easily be observed with backyard telescopes.

And early summer is a great time to look, with the best globular clusters on view.

These clusters are some of the most distant objects in our galaxy.

They are some of the oldest too.

But before we give a guide to finding them, let’s find out more about these remarkable objects.

What are Globular Clusters?

Globular clusters, as their name implies, are spherical clusters of stars.

They are huge. Globulars contain hundreds of thousands of stars.

Some clusters hold over a million stars, gravitationally held in a ball.

The biggest clusters are around 300 light years across. 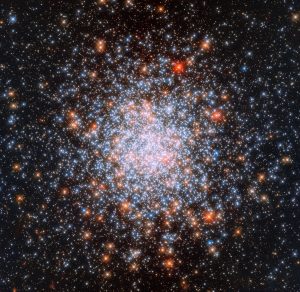 Globular clusters are made of very old stars.

They represent some of the oldest stars in a galaxy.

Some date to around 12 billion years old.

And they seem to be present in all spiral galaxies like our Milky Way.

They also surround many elliptical galaxies. 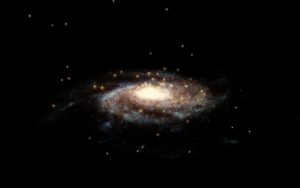 How these clusters formed is a mystery.

Perhaps they were made from huge nebulae, clouds of gas and dust.

There is little gas and dust among the stars now.

The stars have either used up all the gas in their formation or blown it away with their radiance.

There is no active star formation in the clusters now.

Best of the summer globular clusters is M13 in the constellation Hercules.

It is sometimes called the Great Cluster.

Charles Messier placed it in his catalogue of comet-like objects in 1764.

Between them is a keystone shape of four stars.

This represents the body of Hercules. 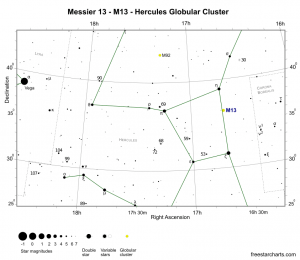 About two-thirds the way up the right hand side of the keystone is M13.

In a really dark clear sky, M13 can be seen as a fuzzy glow with the naked eye.

Binoculars make the glow much brighter. 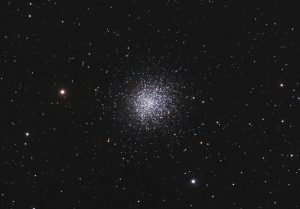 With a small telescope, the edge of the glow resolves into stars.

A larger telescope reveals the stars as grains of light in a dense ball of light.

Above the keystone of Hercules is another globular, M92. 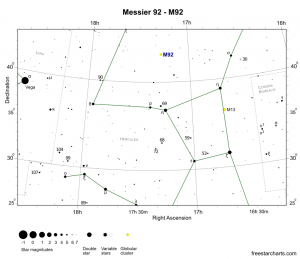 Like M13, it is a fuzzy patch in binoculars.

With a telescope it resolves into a bright core with a grainy halo of stars. 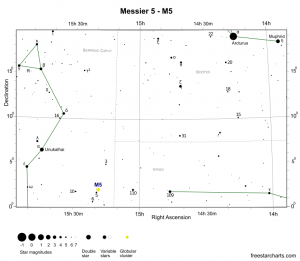 Another bright cluster in a telescope is M5.

It lies below and left of the bright star Arcturus.

Again it shows as a bright hazy core surrounded by grainy stars.

Globular clusters are found in the halo of the Milky Way.

They are spread above and below the disc of stars that make our galaxy.

Because they are not in our stellar neighbourhood, globulars are fairly distant objects. 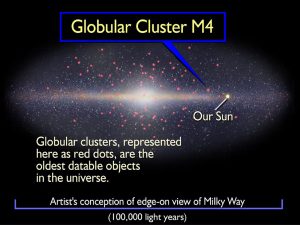 Astronomer Harlow Shapley discovered this arrangement of globular clusters in 1917.

His results showed that our Solar System lies around 30,000 light years from the galactic centre.

Before this, it was assumed that we were close to the middle of the Milky Way.

Shapley’s findings also told us that our galaxy is 100,000 light years across.

So globular clusters have played a significant part in modern cosmology.

They are also pretty objects to observe with a telescope.