The huge meteorite hurtled toward the Earth at 50,000 kilometres per hour.

It burned its way through the atmosphere in a trail of incandescence.

Seconds later it hit the ground and a giant fireball erupted, brighter than the Sun.

The explosion flattened everything for miles around.

When the dust settled, a huge cavity had opened up in the landscape. 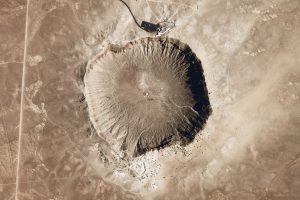 It sounds like a scene from a Hollywood disaster movie.

We can see the result of this gigantic impact today.

It is Meteor Crater in Arizona, USA.

The meteorite was a huge chunk of metal, a fragment from the asteroid belt.

Originally 100 metres across, half of its bulk burned away during its plunge through the atmosphere.

The remainder, a 50 metre missile, hit the ground with the force of an atomic bomb.

In the instant of the impact, most of the meteorite was vaporised.

Only a relatively little survived the heat of the explosion. 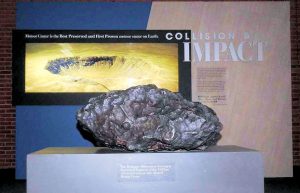 Many fragments of the impactor have been found.

They are known as the Canyon Diablo meteorite, after the small 19th Century town nearby.

There are three basic types of meteorite. They are stony, iron-nickel and a stony-iron.

Meteor Crater was the result of an iron-nickel impact.

The crater lies in the arid desert of Arizona.

Because of its location, it has seen little erosion by wind and rain.

It is the best-preserved impact crater on Earth.

However time has seen some changes.

The rim has eroded to around 45 metres tall.

Mud washed down by storms has raised the crater floor.

Meteor Crater first came to public attention in the 1890s.

However geologists could not agree about its origin.

Some cited iron fragments as evidence of meteorite impact.

Others were convinced it was a volcanic caldera, like others in the region. 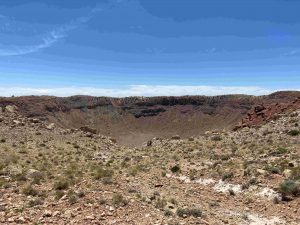 One man who was convinced its was a meteorite crater was mining engineer Daniel Barringer.

He bought the crater and land around in 1903 and began the search for metal.

He believed that the bulk of the iron-nickel meteorite lay beneath the crater bottom.

But his drills revealed nothing.

In 1929, an astronomer calculated that most of the meteorite had vaporised on impact.

There was no huge metal deposit below ground.

However the volcano / meteorite debate continued.

It was resolved in the 1960s by Gene Shoemaker.

He proved conclusively that a meteorite had indeed made the crater.

Despite the arguments, the Barringer family held on to the land.

Now the crater is paying a dividend as a tourist attraction.

And this year I was among them.

As we approached Meteor Crater on the flat desert road, we could make out the raised rim in the distance. 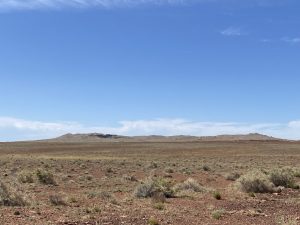 At the Visitor Centre we paid our $25 entry fee and opened a door to the outside.

There it was, Meteor Crater!  It was an awesome sight. 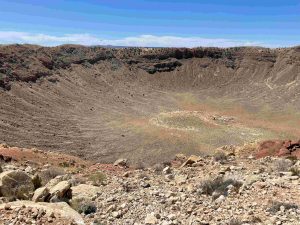 We strolled to a couple of viewpoints to take in the view.

The crater filled the landscape, an enormous, deep basin.

At the top we could see bands of sedimentary rock.

Visitors are not allowed to hike down to the crater floor.

However they are encouraged to join a guided tour along the crater rim.

It was obviously going to be a hot Arizona day so we joined the early 10am tour. 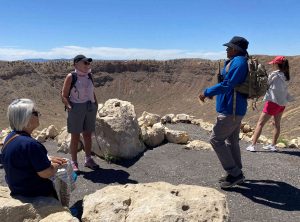 Our guide, Jeremy, took us through the formation and history of the crater.

He later told us about the different rock layers.

At the top is Coconino sandstone, then limestones and mudstone.

The strange thing is that these layers are younger at the top than the bottom.

The meteorite impact turned the strata upside down.

Jeremy took us along the rim to the Homestead.

Now derelict, this was the first office and visitor centre set up by the Barringer family. 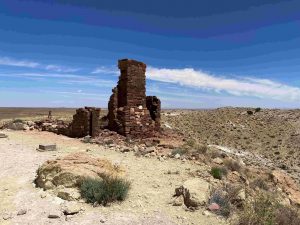 On our way back, Jeremy produced a palm-size model of the crater.

It clearly showed that the crater shape is squared off.

This is due to fault lines  in the rock layers at the impact site. 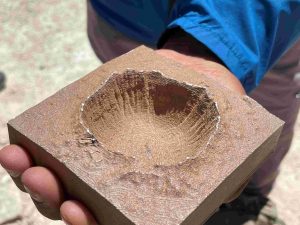 The rim tour gave differing views of the crater and an increasing appreciation of the impact that caused it. 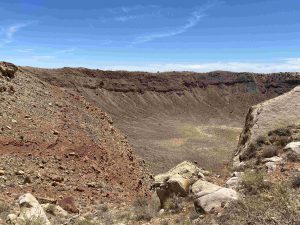 The Visitor Centre is more than a tourist attraction.

It is a focus of education and research

The visitor experience includes interactive exhibits about meteorites and comets.

The movie theatre features a video about the impact and its aftermath.

There is also a 4D theatre experience that flies into the crater then out to a meteorite on collision course.

And, of course, there is the customary gift shop and cafe.

My favourite exhibit was the centre’s largest meteorite. 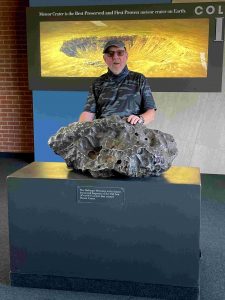 After the tour we visited viewpoints near the centre.

We used the telescopes set up to give close ups of the crater floor.

The mine workings of Barringer are still in evidence.

Close by is a 6 foot figure of an astronaut.

The Apollo astronaut training programme in the 1960s used the crater. 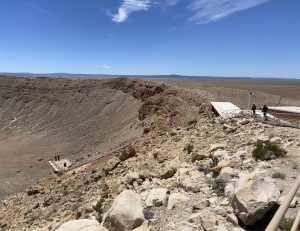 The Moonscape in the crater floor provided an ideal training ground for astronauts.

It was used in drop tests during the development of the Apollo spacecraft. 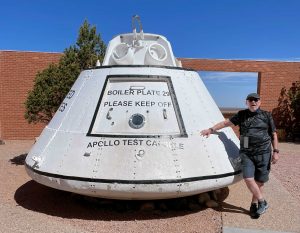 The sight of that enormous basin stays alive in the memory. 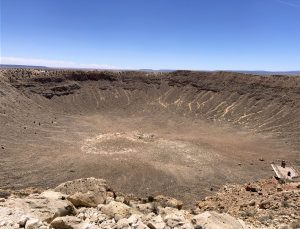 What also remains is a vivid realisation of what can happen when a rock from space collides with our planet.

A similar 50-metre meteorite could wipe out a city.

Fortunately such cosmic collisions are rare.

Indeed, as far as we know, no-one has ever been killed by a meteorite fall.

But the crater stands testament to the hidden dangers in the sky.