This week on March 20th the Spring has officially began!

But wait a minute, how do we know when each season starts? Why do we even have seasons? And, most interestingly, are there the same seasons on other planets?

Why do we have seasons?

Many people think that the long-term variations in weather and daylight have to do with the fact that the Earth’s orbit is not exactly round. Indeed, it is true that our planet’s path around the Sun  is slightly squashed and the Sun sits not in the centre but in one of the foci of the Earth’s elliptical orbit. And that does mean that some parts of the orbit bring the Earth closer to the Sun and some further away.  But you might be surprised to hear that it is in the Northern Hemisphere Winter the Earth is closest to the Sun. So there must be something else that causes seasons!

The real reason we have seasons is the tilt of the Earth’s orbit. Our planet does not spin on its axis straight, but slightly, about 23 ½ degrees, askew. The change in the orientation of the axis in respect to the Sun determines the weather, temperature and the amount of daylight we get in each particular location. Whether you live in the Northern or Southern Hemisphere, the rule of a thumb is: when your hemisphere is pointed towards the Sun, it’s Spring or Summer, when it’s pointed away, it’s Autumn or Winter. The “tipping points” when the orientation changes are called equinoxes. There are two equinoxis a year. In the Northern Hemisphere we call them Vernal (Spring, March) equinox, that happens between March 19 and 21, and Autumnal (September) Equinox, that happens between September 21 and 24. They mark the beginning of the Spring and Autumn.

Now, if you draw the Earth’s orbit with a line connecting the two equinoxes, then the perpendicular to this line running through the Sun will cross the orbit of the Earth in two points, we call them Solstices. As you probably have already guessed, the two mark the beginning of Winter (December Solstice, occurs in December 20-23 ) and Summer (June Solstice, occurs in June 20-23) .

Interestingly, solstices and equinoxes do not divide a year into four equal parts!

Summarizing the above, one way to to determine when an astronomical season begins is to use the motion of the Earth around the Sun.

OK, now we know all about the seasons on Earth. But what about…

Seasons on other planets

Seasons are all about the tilt of the axis of rotation. The more a planet is tilted, the more prominent seasonal variations are. But other factors also play an important role, such as composition and density of a planet’s atmosphere, how close or far away from the Sun a planet is, whether its orbit is more circular or elliptical.

Are you ready to experience seasons on other Solar System planets?

Welcome to Mercury, a very peculiar planet. The tilt of Mercurian axis is 0.034 degrees. That means the planet spins nearly perfectly straight! Technically, that means there are no seasons on Mercury. On the other hand, among the Solar System planets Mercury is known for its highly elliptical orbit that brings the planet close to the Sun and then carries it much further away. These variations of distances to the Sun create variations in temperatures on the tiny planet. Kind of Summers and Winters.

With a slightly bigger tilt of 3 degrees, the next planet, Venus, also spins almost straight. What’s weird is that the spin is retrograde. Meaning the direction is opposite from the direction of the planet’s orbital motion (and the direction in which most other planets orbit and spin). Technically we could say that Venus has a tilt of 177 degrees (180 minus 3). That will explain why it spins straight but backward. Though we will still have no idea why that happens.This peculiarity aside, we have to admit that there are no seasons on Venus. And, thanks to its super thick carbon dioxide atmosphere, no even day-to-night temperature changes. You will experience the ever-so-slightly uncomfortable 460 degrees every moment of any day of a Venusian year. Enjoy!

We knew there was a reason humans wanted to do to Mars. In many aspects it is the most Earth-like planet planet in the Solar System. Seasons are no exception. Mars is tilted at familiar and comfortable 25 degree angle and any visitor to Mars will experience the same 4 seasons we have on Earth. Only, of course, Mars, being further away from the Sun, gets way less sunshine. So we would not recommend taking off your sweater in the Summer. And don’t be surprised that each season lasts almost twice as long as on Earth. After all Mars takes 687 days to complete one orbit!

Saturn, on the other hand, is tilted at an angle of 27 degrees. We know all about Saturn’s tilt thanks to the planet’s famous rings. The rings lie around Saturn’s middle, or equator, (which is perpendicular to the axis of its rotation) and therefore show us how the planet’s axis in inclined relatively to its orbit. The four prominent Saturnian seasons last over 7 years each.

When it comes to seasons, Uranus is the most amazing planet of all. Why? The axis of the planet’s rotation is tilted 98 degrees. Uranus looks like it is not spinning but rolling on its orbit. To understand what the seasons on Uranus are like, let’s look at the Northern Hemisphere of the planet at the four “tipping points” (equinoxes and solstices) on its orbit. 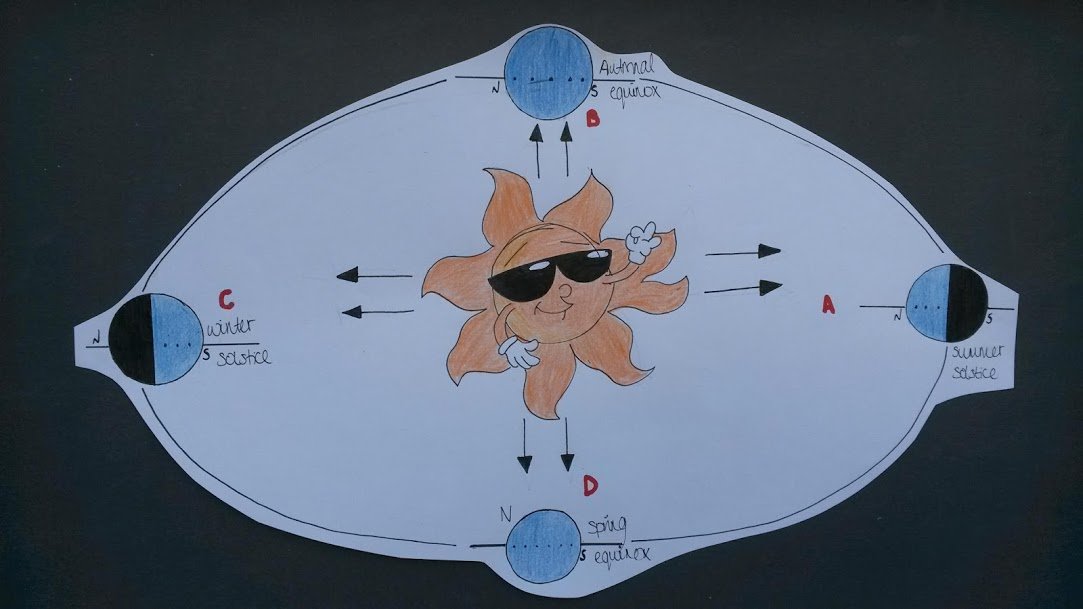 A -That’s the start of the Summer in the Northern Hemisphere. It will last for 21 years. During that period the Sun will be shining constantly, day or night.

C -That’s the start of the Winter in the Northern Hemisphere, 21 years of never-ending night. Creepy!

B and D – These are, respectively, the start of the Autumn and Spring in the Northern Hemisphere. As Uranus rotates on its axis once every 17 hours, most areas of the planet will experience day and night.

These seasons are very different from the ones we experience on Earth, don’t you think?

The last known planet of the Solar System (for now, at least, see our recent blog The search for Planet 9 goes on for more details) Neptune, has a tilt of 28.32 degrees, similar to the tilt of the Earth and Mars. Despite being more than 40 times farther away from the Sun than the Earth and getting way less sunlight, Neptune also has four seasons, each lasting over 4o years! We observe seasonal changes on Neptune as a change in the appearance of the planet’s cloud bands. The bands grow wider and brighter in response to the increased amount of heat from the Sun! Obviously, to have the full picture of the seasons on Neptune we need to watch it a tad longer – a year on Neptune lasts 165 Earth years!