The long days of summer mean that we have to wait until late to see the stars.

But that wait eventually rewards our patience. The summertime stars hold beautiful sights.

And when the warmth of the day extends into darkness, it can be a comfortable experience too.

So what should we look for on a summer’s night? 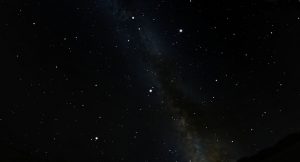 Stars of Summer 1.   Courtesy of Stellarium

Our views of the night sky come by courtesy of Stellarium.

Stellarium gives a superb rendition of the night sky on a PC, tablet or smart phone.

We can see the sky at any time on any date of any year.

It’s the software we use in Wonderdome Planetarium.

And it’s free to use! Download it here at Stellarium.

The standout shape of stars is the Summer Triangle.

It’s a huge triangle of bright stars that dominates the sky at this time of year.

Simply look to the south and there it is. 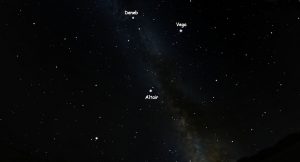 The brightest star of the trio is Vega.

To its left shines Deneb whilst below the two lies Altair. 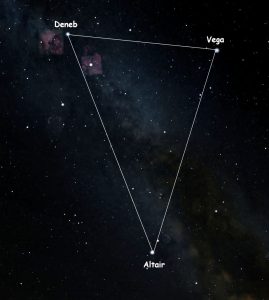 The Milky Way runs through the triangle.

The disc of our galaxy contains hidden gems.

We’ll search out some of them later, but first we’ll take a closer look at these three stars.

Vega is the brightest star in the little constellation of Lyra the Harp.

It is 25 light years away from Earth.

Vega is twice as massive as our Sun and consequently shines 40 times brighter.

It spins round in around 16 hours.

This rapid rotation spins Vega into a markedly oval shape. 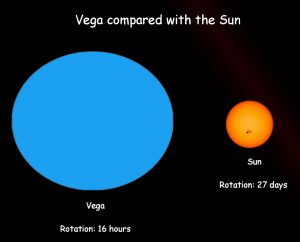 Recently astronomers have discovered that two belts of asteroids swarm around Vega.

Perhaps there are planets there too. 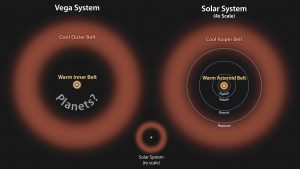 Deneb is a hot blue superstar.

It is over 200 times wider than our Sun and consequently shines 100,000 times brighter.

Deneb lies a hundred times further away than Vega, at around 2,500 light years.

As a result, this distance dims its true brightness. 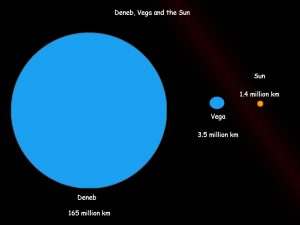 Altair is relatively close to us at only 16 light years.

It rotates even faster than Vega, in only around 9 hours!

As a result, Altair is also wider at its equator than pole to pole.

Altair is the smallest of the Summer trio, about twice the diameter of our Sun. 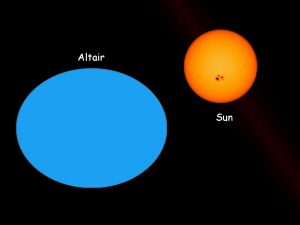 With a telescope, you can see two night sky gems.

Both are so called planetary nebulae.

However they have nothing to do with planets.

They are actually old stars caught in their death throes.

These dying stars are blowing away their outer layers in huge bubbles of hot gas.

Their round shape gave them the misnomer of planetary nebulae.

M57, the famous Ring Nebula, lies between the two lower stars of Lyra the Harp.

A small telescope will resolve it as a tiny diffuse ring. 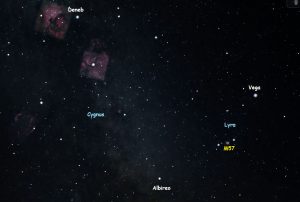 How to find the Ring.      Stellarium 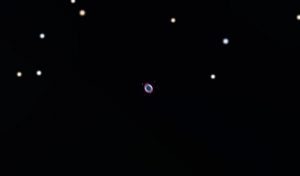 Another notable planetary is M27, the Dumbbell Nebula.

To find it, first look above Altair.

You will see a pattern of four stars that make the tiny constellation of Sagitta.

This arrow looks like a dart. Two stars to the right make the flight, with the point to the left.

M27 is a little way above the point. 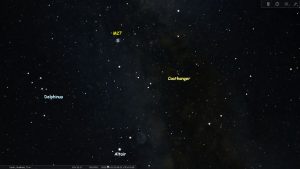 Through the eyepiece it appears as a fuzzy grey patch.

At higher power, you might glimpse the two lobes of the Dumbbell. 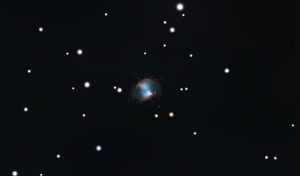 Our next little jewel can be seen using binoculars.

This time look above the two stars that make the flight of the arrow.

Here is the ‘Coathanger’ star cluster.

How to find the Coathanger Cluster.   Stellarium

There’s no doubt when you find it because it looks like a coathanger upside down.

It’s also known as Brocchi’s Cluster and is one of my personal binocular favourites. 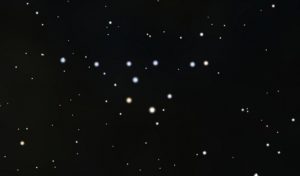 The Coathanger lies in the dim constellation Vulpecula, the Little Fox.

To the left of Altair there is another small star pattern worth finding.

It is Delphinus, the Dolphin.

Look for a diamond of stars with one below, then imagine a dolphin leaping from the sea.

It’s quite wonderful to find this little known gem.

This summer, the triangle plays host to a double stargazing bonus.

Below left of Altair, low in the sky, Saturn is on view.

Saturn more than rivals the stars of the triangle in brightness, therefore it’s easy to find. 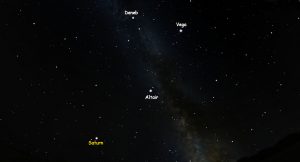 Through even a small telescope you will see the rings.

With larger instruments, Saturn is a joy to see. 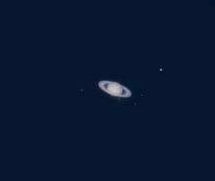 The second bonus of summer stargazing is the Perseid Meteor Shower.

The shooting stars spread across the sky from the left side of the triangle.

The peak night for the display is on the night of August 12th. 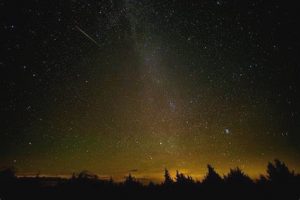 Unfortunately this year there is a full Moon in mid-August.

It will outshine all but the brightest meteors.

However it is still worth looking out for the Perseids if you have a clear night.

And remember to make a wish on a falling star.

My wish for you is for clear nights to enjoy our summer stars.