It is the story of the life cycle of stars, a tale of giants and dwarfs. 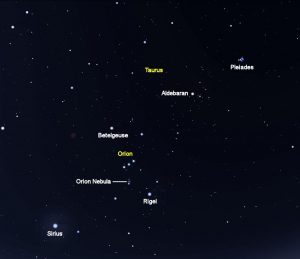 The stars around Orion from Stellarium

We find the players in our drama by looking south to Orion the Hunter.

We see three bright stars in a line that make his belt.

To find our first target, we look below Orion’s belt, to the tip of his hanging sword.

The fuzzy glow is the Orion Nebula.

Above the belt, we see two bright stars forming the hunter’s shoulders.

The orange-red star to the top left is Betelgeuse.

Next, we follow Orion’s belt up to the right.

We see the red star Aldebaran, the glowering eye of Taurus the Bull.

Then we continue the line to a hazy cluster of stars, the Seven Sisters, aka the Pleiades.

Finally we follow the belt down to the left to Sirius, the dog star, twinkling as the brightest night-time star.

We have seen the actors in our drama.  Now they can tell the life story of stars. 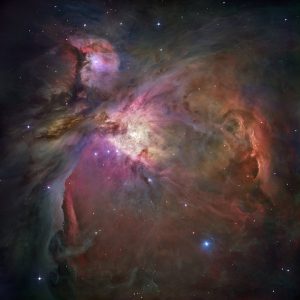 We start below Orion’s belt with the Orion Nebula. This is a glowing cloud of hydrogen gas mixed with dust.

Here, gravity is at work, squeezing the gas cloud. As it collapses, the cloud gets thicker and hotter.

After a million years, the temperature reaches ten million degrees.

The hydrogen gas explodes in a nuclear fusion reaction and a star is born.

New stars are being born in Orion’s nebula right now.

Look next to the Seven Sisters, a cluster of young, energetic stars. They are only 100 million years old!

In Japan the Pleiades are known as Subaru. Look on a Subaru car and you see the badge is made of stars. 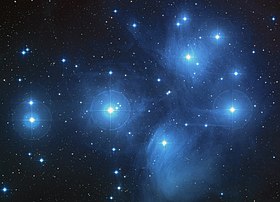 We now turn to Sirius, a star in the prime of life. In its core, hydrogen atoms fuse to helium. This nuclear fusion reaction gives out enormous amounts of energy.

Sirius contains enough hydrogen to last for billions of years. Most of the stars in your view are like Sirius and are called Main Sequence stars.

Our Sun is a Main Sequence star, about half way through it’s ten billion year life.

Stars have enough hydrogen fuel to last for millions, billions of years. But eventually they exhaust their fuel supply and die.

When a star runs out of hydrogen, it’s nuclear furnace fails and the star swells up to become a red giant star.

When we look at Aldebaran we see such a red giant. This dying star is 30 times wider than our Sun..

And as we gaze at Aldebaran, we get a glimpse of our future. Some five billion years from now, our Sun will run out of gas and swell into a red giant.

As it grows it will destroy Mercury and Venus. Eventually it’s swollen surface will be so close to Earth that our planet will melt.

The end of the world is due 5 billion years from now.

Dying stars continue to grow, shedding their outer layers in a ball of fire. A few billion years later,  all that is left of a once brilliant star is it’s hot centre.

It has become a white dwarf, a dead star.

We look to Sirius again. It is hiding a corpse.  Our brightest night-time star has an unseen companion, Sirius B.

Sirius B is a white dwarf, so small and dim only large telescopes can pick it out from its dazzling neighbour. 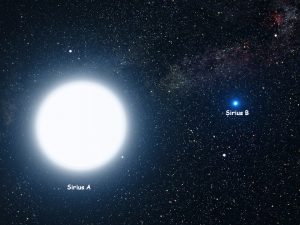 Sirius A and B. Image credit: NASA

So far, we have traced the life of ‘ordinary’ stars like the Sun. Now find two superstars and a dramatic end to our story.

We look back at Orion and the bright star at the bottom left. This is Rigel, a blue supergiant star shining 60,000 times brighter than our Sun.

This massive star is burning its hydrogen at a prodigious rate and is destined to live only a few million years.

When Rigel begins its death throes, it will swell up to become a red supergiant star.

Orion holds one of these rare stars. We look to the top left and find Betelgeuse, a supergiant star some 1000 times wider than our Sun.

Betelgeuse is living on borrowed time. In its core, a series of nuclear reactions are burning to produce increasingly heavier elements.

Helium fuses to make carbon and on to nitrogen, oxygen, silicon and finally iron. The iron cannot fuse any further and becomes a dead, inert core. 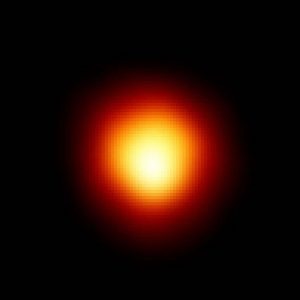 That core cannot support the star against its own gravity much longer. Soon gravity will collapse the star.

The core will be crushed and the rest of the star will collapse to crash into it.

The outer layers will rebound and blast into space in a supernova explosion.

When Betelgeuse explodes, it will light up our night sky. We will be able to read a book by the light of an exploding star!

When the light fades away, Betelgeuse will be gone, its centre crushed by gravity into a black hole.

However exploding stars leave a legacy in the elements they blast into space. These elements can form new stars and planets – like our Earth.

Everything in our planet was made in stars. We are all made of stardust!

This story of the life cycle of stars took brilliant scientists many decades to decipher.

We can see that story in a few minutes and in just three constellations!

If you have a telescope, you can see the remnant of a supernova.

Just above the lower horn of Taurus lies the Crab Nebula, the remains of a superstar that exploded a thousand years ago.

At its heart pulses of radiation come from a neutron star, the other possible remnant of a supernova.

A neutron star is so dense that a teaspoonful would weigh in at some 100 billion tons!

To explore the night sky on your PC or tablet, download Stellarium.

Stellarium is a free open source planetarium for your computer.

It shows a realistic sky, just like you see with the naked eye, binoculars or a telescope