We all know and love Hubble images. Those multicoloured swirls of gas sprinkled with shiny stars, galaxies dotted all over the inky black background…

But is it what the Hubble Telescope actually sees? Or are these images a result of careful colouring, enhancing and other processing techniques? And, if so, how scientifically accurate the resulting pictures are?

In other words, we want to know how the astronomical images are made! 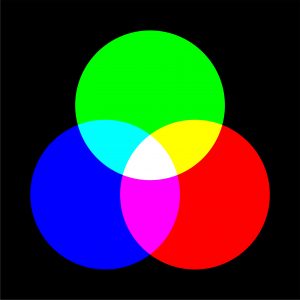 The magic of the Hubble images goes back to the end of the 19th century when the Scottish physicist James Clerk Maxwell presented the world’s first colour photo. The image, known as “The tartan ribbon” was made using Maxwell’s three-colour technique.

To create the photo, three separate images of the tartan ribbon were made with green, blue and red filters over the lens.

The images were printed on glass plates and projected using 3 projectors (with the same color filters as photographs) on top of one another to produce a full color image.

Of course, Maxwell’s “tartan ribbon” looked rather blurry and dull, nothing like the majestic Hubble images we admire today. But the core idea, combining different filter exposures to make a colour photo, is the same as in modern astro photos.

The filter colours were not chosen randomly. Red, Green and Blue are the three “additive primary colours of light”. The three added together make white light. Every two of them mixed together produce secondary colours, cyan, yellow or magenta. Our eyes have special receptors, called cones, that are responsible for the colour perception. There are three types of cones and they are most sensitive to Red, Green and Blue light.

We bet you have long suspected this: Hubble “public” images are not what the telescope sees. Moreover, often these images do not represent the true colours of the objects in them.

In fact, the telescope does not see colour at all. Hubble’s vision is monochrome. Also, and that is very important, it extends beyond visible light. Hubble can detect ultraviolet radiation as well as a bit of infrared. Both are invisible to the human eye.

Hubble uses special filters that let through certain colours (wide-band imaging) or even separate wavelengths (narrow-band imaging). The telescope takes pictures of a celestial object with several filters, one filter at a time. Astronomers on Earth then combine these individual exposures to create a “colour” image. Some of these colours are what you would have seen if your eyes were as good as Hubble Telescope’s. Other are just colour maps that help us better see the structures of the objects in them.

Wide-band imaging uses filters that let through (just as the name suggests) a WIDE BAND, i.e. part of the spectrum, a certain colour range. Astronomers usually use three filters, Red, Green and Blue (RGB filters), each of them covers a third of the visible spectrum.

Every image is assigned a colour based on what filter it was shot with. A full colour image is made by stacking together individual exposures. These wide-band images show the true colour of the objects. Galaxies and planets, for example, are usually photographed in wide-band.

Sometimes astronomers use secondary colour filters, cyan, magenta, yellow (CMY), instead of RGB filters. If you would like to learn more about the two palettes, please see RGB VERSUS CMY COLOR IMAGERY.

Narrow-band filters, on the other hand, allow us to capture a very tiny portion of the spectrum down to a specific wavelength.

This is usually done to take pictures of emission nebulae, the vast clouds of gas and dust in which stars are born. These objects shine thanks to the hot stars that excite the gas particles in the cloud. The gas the emission nebulae contain is mainly hydrogen, with traces of oxygen, nitrogen, sulfur and some others. So it makes sense to photograph nebulae in those particular spectral lines and not in broad-band – as there is not much in between.

How to assign colours

Let’s say we took 3 photos of a nebula with the hydrogen, oxygen and sulfur filters. How do we decide what colour to assign to each exposure?

To our eye, Ha and SII lines will appear red and OIII will look green. But such palette will not make a very descriptive (or nice looking) image. So instead of choosing natural colours, we will assign colours to these lines based on their relative positions in the spectrum. That means the longest wavelength will get colour red, the shortest – blue. The medium wavelength will be assigned colour green.

In case of hydrogen, oxygen and sulfur exposures, sulfur will be assigned colour red, oxygen  will be blue and hydrogen will be green. Astronomers call this palette SHO, or “the Hubble palette”. Colouring the narrow-band images this way produce very rich and dynamic pictures.

For example, below are two images of The Fighting Dragons of Ara (NGC 6188 Nebula). The first image represents true colours, and the second is a colour map. Which one do you think tells us more about the structure of the gas cloud? 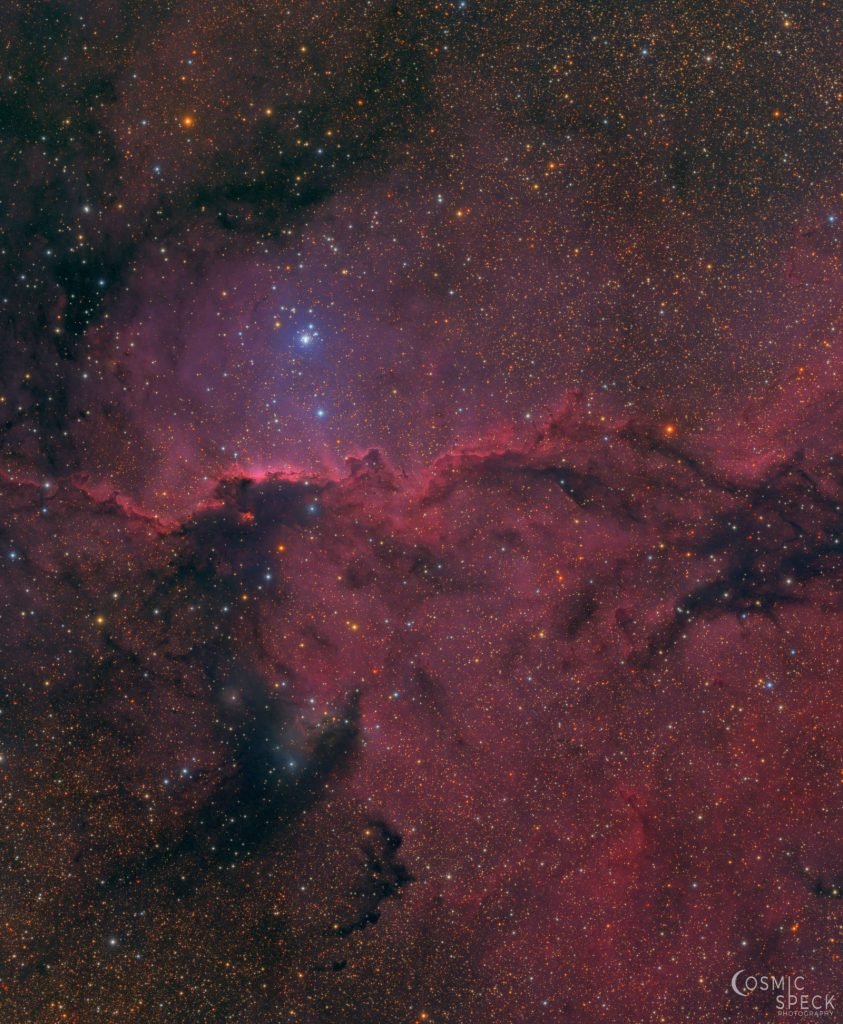 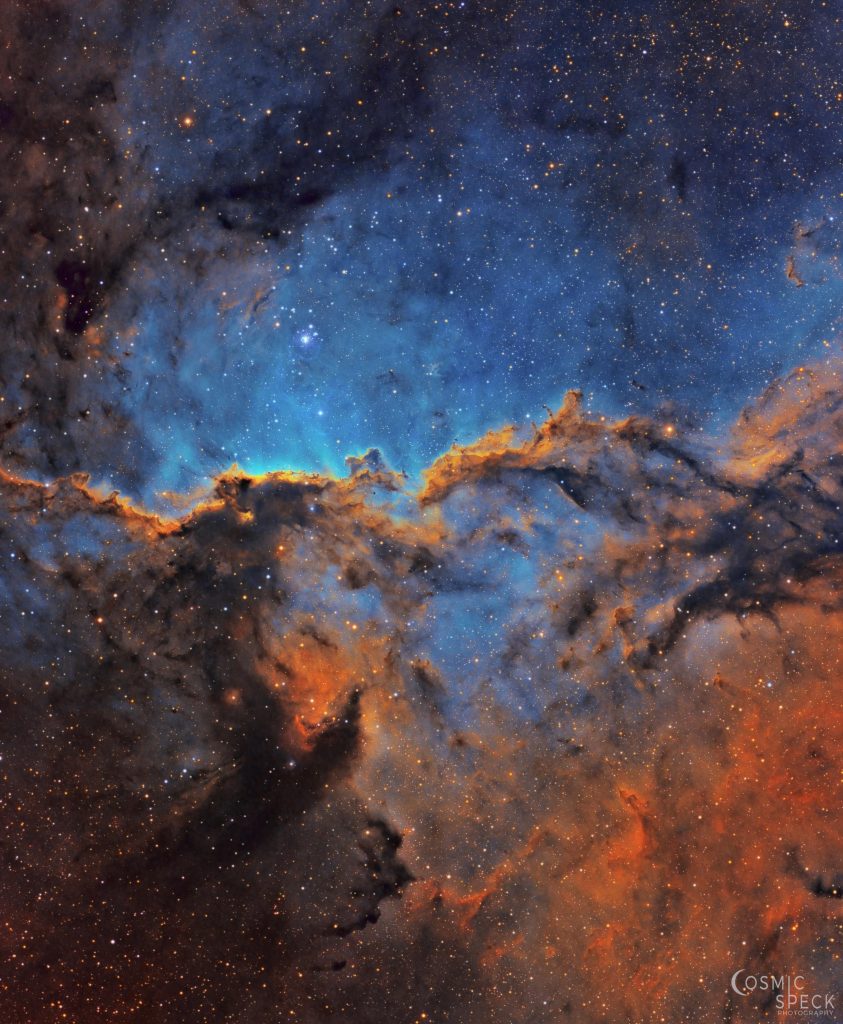 Now, you may ask…

Does the Hubble Telescope use more than three filters to create one image?

Of course, some Hubble (and not only) photos are a combination of more than three filters.

Other popular channels that Hubble uses include ionized Nitrogen NII, Hydrogen Beta. To create a color image with more than three colours, we can use the same method starting with three primary colours and then adding secondary colours.

Do other astronomers use “the Hubble palette” to color in their images too?

The Hubble palette is very popular. But many astrophotographers prefer mixing colors in a different way. For example, some reserve colour red for Hydrogen-Alpha line (the natural colour of Ha). You can find lots of images of the same nebula taken and processed by different people in a different way – that look very VERY different.

Can I find out what filters were used for a particular Hubble photo and what colours they were assigned?

Absolutely! Go to NASA https://hubblesite.org/ or https://www.spacetelescope.org/images/. Choose an image you want to know more about. The image description will tell you what filters were used to make the photo and what filter each colour represents.

Why not use a colour camera from the start?

You can use a “one shot” colour camera and there are many advantages to this method. As a rule, a monochrome camera with the same resolution as a colour one makes better pictures. Therefore a monochrome camera with filters is the first choice for professional imaging. But if you are an amateur astrophotographer, there are excellent and affordable colour cameras out there! For more information see The best CCD cameras for astrophotography in 2020.