Who is Sir Roger Penrose? It depends on whom you ask. A mathematician will tell you that he is “the guy who invented Penrose tiles”. An artist will say he was the one who came up with the impossible stairs, the idea that later became the foundation of Esher’s famous art print “Ascending and descending”. An astronomer, of course, will start bubbling about black holes. And pretty much everyone else will tell you that Penrose is one of the 3 scientists who received the 2020 Nobel Prize in Physics.

Penrose, a man of many talents, also wrote several books on consciousness and artificial intelligence and founded the Penrose Institute [based in California] “for the Study of Consciousness, Creativity and the Physics of the Universe”.

Roger Penrose was born in Colchester, UK, on the  8 August 1931. His father, Lionel Penrose, was a geneticist and his mother, Margaret Leathes, was a doctor.

Penrose received his B.S. in Mathematics from University College, London, where his father held a post of a professor of human genetics. Roger went on to gain a PhD in Maths from St. John’s College, Cambridge.

A mathematics with a keen interest in quantum theory and cosmology, Penrose later successfully applied mathematical principles and constructions to the problems in those fields.

Like Einstein, Hawking and many others, he looked for ways to to join the Relativistic and Quantum world. The result was his Twistor Theory, that, although did not succeed in merging the two fields, became an interesting and independent branch of mathematical physics in its own right.

Roger Penrose collaborated with Stephen Hawking, and in 1988 they were jointly awarded the Wolf Foundation Prize in Physics

“for their brilliant development of the theory of general relativity, in which they have shown the necessity for cosmological singularities and have elucidated the physics of black holes. In this work they have greatly enlarged our understanding of the origin and possible fate of the Universe.”

(Another prize the two distinguished scientists shared was the 1975 Royal Astronomical Society’s Eddington Medal.) In 1994 Roger Penrose was knighted for his service to science.

Penrose is now an emeritus professor at the University of Oxford.

Many of us admire the mind-bending works of the Dutch graphic artist M.C. Escher. But it is not widely known that the inspiration for some of his most famous prints, namely Ascending and Descending (1960) and Waterfall (1961), came from the 3-page paper that Roger Penrose wrote in collaboration with his father Lionel.

In the paper, titled IMPOSSIBLE OBJECTS : A SPECIAL TYPE OF VISUAL ILLUSION, father and son presented three impossible objects, that is 2-dimensional drawings of [seemingly] 3-dimensional objects whose parts are connected in such a way as to make it impossible for these objects to be 3-dimensional.

What’s tiling? In the ‘everyday’ sense this is laying the tiles side by side to cover a certain area, such as the bathroom floor or kitchen wall. Interestingly, mathematicians use terms TILES and TILING in a fairly similar way. In Maths, tiling means covering a plane with shapes (i.e. tiles) so that there are no gaps or overlaps.

One of the old questions in geometry asks:  is it possible to create a pattern that never repeats itself using a finite number of different type tiles? Turns out that the answer is yes. 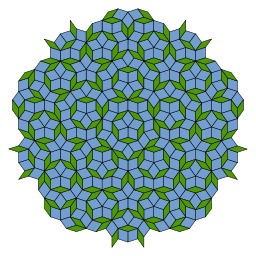 The first aperiodic tiling that mathematicians came up with used 20,426 different tile shapes. Further works brought that number down to 104, then to 40 and eventually to 6.

In the 1970s Roger Penrose came along and discovered a new type of tiling that used just 2 different shapes. One of his 2-tile patterns uses shapes called kites and darts put together using  certain rules. Another uses two kinds of rhombuses, with, again, some matching rules that dictate how these diamond tiles can be joined.

Although we are not aware of any practical application of Penrose tiling (apart from infamous Kleenex toilet paper and a stunning floor mosaic), in principle it seems plausible that they might be used in computer science in the future .

Does Penrose tiling occur in nature? Well, it seems unlikely. Or, rather, it did seem unlikely before Dan Shechtman’s discovery of ‘impossible’ quasicrystals. The quasicrystals are crystals with aperiodic atomic structure. Essentially they are a 3-dimensional version of Penroses’s 2-dimensional tiling!

THE 2020 NOBEL PRIZE IN PHYSICS

On October 6th 2020 the Nobel Committee made the announcement of the recipients of the 2020 Prize in Physics.

Roger Penrose became one of the three laureates, winning one half of the 2020 Prize “for the discovery that black holes formation is a robust prediction of the general theory of relativity”. The second half of the Nobel Prize was awarded jointly to Andrea Ghez and Reinhard Genzel, the two scientists who led the teams that independently discovered a supermassive black hole at the centre of our Galaxy.

Black holes emerge as singularities in the solutions of the equations that describe Einstein’s theory of general relativity. Interestingly, Einstein himself did not believe that black holes were possible. You see, according to the early theory, the formation of singularities required for the collapsing object to be perfectly spherically symmetrical and for the collapse itself to be spherically symmetrical. Which, in the physical world, is not realistic.

10 years after Einstein’s passing, Penrose approached the singularity problem from a different angle. Instead of writing complicated equations, he  looked at geometry of what goes into a black hole. He introduced the concept of CLOSED TRAPPED SURFACE that leads to singularity. Here is how Penrose explains his concept in the virtual Q&A event.

“Imagine an ordinary surface in 3-dimensional space…Imagine a flash of light occurring all along that surface simultaneously…The trapped surface is the one where the rays converge both ways and the surface is closed up”.

This is exactly the situation we get once we cross the event horizon of a black hole!

Penrose showed that a trapped surface can form in the real physical world if you pack enough mass into a volume of space [and there is not enough counteracting force to balance out the gravitational pull]. No perfect symmetry is required!

As always, feel free to send your questions and comments to our Star Dome team and we hope to see you on one of our Portable Planetarium shows!