On March 18, 1965 at 11:30 am Moscow time a man in a bulky spacesuit left the safety of his spaceship to float in the vacuum of space. His name was Alexei Leonov. Leonov’s spacewalk lasted only 12 minutes, and yet these were some of the most important 12 minutes in the history of space exploration as well as another ‘first’* achieved by the Soviet space program.

Alexei Leonov and his crewmate, cosmonaut Pavel Belyayev, launched into space on board Voskhod-2* spacecraft on March 18th, 1965 at 10 am Moscow time. The aim of the mission – to conduct an EVA ( or spacewalk) before the Americans do.

*Voskhod was a modified version of Vostok spacecraft (the one that carried Yuri Gagarin into space) that could accommodate several crew members. Voskhod-2’s predecessor, Voskhod-1, carried a crew of 3. Voskhod-2 had only 2 seats as the crew needed an extra room to change in and out of their EVA suits.

Despite all the planning and training, nobody knew what the ‘walk’ outside the spaceship would be like. Or whether the spacesuit would provide enough protection against the extremes of outer space. Therefore Leonov had strict orders to report absolutely everything that was happening during his EVA.

The spacewalk began on Voskhod-2’s second orbit around the Earth. It started well: Leonov, attached by a 5 meter tether, would float away from the craft, then pull himself closer and let go again. The problems began when it was time for the spacewalker to return back to his ship. Due to the lack of outer pressure, Leonov’s Berkut spacesuit inflated so much that the cosmonaut’s feet and hands pulled away from his boots and gloves. What’s worse, he could not squeeze back inside. Of course the designers expected that the suit would somewhat puff-up. But nobody on the ground could anticipate the magnitude of the problem.

With no time to lose – he was getting low on oxygen – Leonov began to lower the pressure in his suit and bleed off the precious air. Finally he was able to wriggle back inside. But because he entered the airlock head-first, not feet-first as instructed, he had to bleed off even more oxygen to turn around and close the hatch. By the time Leonov joined his crewmate Pavel Belyayev inside the main module, he was overheated and drenched in sweat.

Return to the Earth

As near-disastrous as the end of the spacewalk was, this was just the beginning of Voskhod-2 crew’s problems.

The spacecraft was supposed to re-enter automatically, but the guidance system failed and the cosmonauts received the command to land the spacecraft manually. Leonov and Belyayev had to quickly – they were low on fuel – but very carefully chose the landing site: away from the settlements and power lines while still on the territory of the Soviet Union.

Unfortunately, the spacecraft’s ‘Vzor’ window was positioned so that the cosmonauts could not look out to orient the ship towards the Earth while being strapped in their seats. They had to unbuckle, leap out of the seats, look out and dash back. It only took about 45 seconds – but 45 seconds was all it took to overshoot and miss the landing site by almost 1200 miles. On March 19, 1965 at 12:06 pm Moscow time, Belyayev and Leonov safely landed in Taiga, 112 miles away from the city of Perm.

The Voskhod-2 cosmonauts had to wait several days in the snowy forest, the land of wolves and bears where the temperature plunges to -25 degrees C at night, for the rescue team to arrive.

It sure was an ‘adventure’ on its own as they did not have enough food, warm clothes or blankets. Yet, days after the landing the two cosmonauts were back in Moscow to report to the Soviet officials that a man can survive in space.

Despite the success of the mission, for the Russians it was more of a dress rehearsal for the much more ambitious project, the Moon landing. It could have been Leonov, not Armstrong, to become the first man on the Moon.

The crew after Voskhod-2

Voskhod-2 was the only space mission for Pavel Belyayev. The cosmonaut passed away on January 10th 1970, age 44. Alexei Leonov returned to space in 1975 as part of the legendary Apollo-Soyuz, the first joint mission of the USSR and USA that saw two spacecraft – Apollo and Soyuz – dock in space. 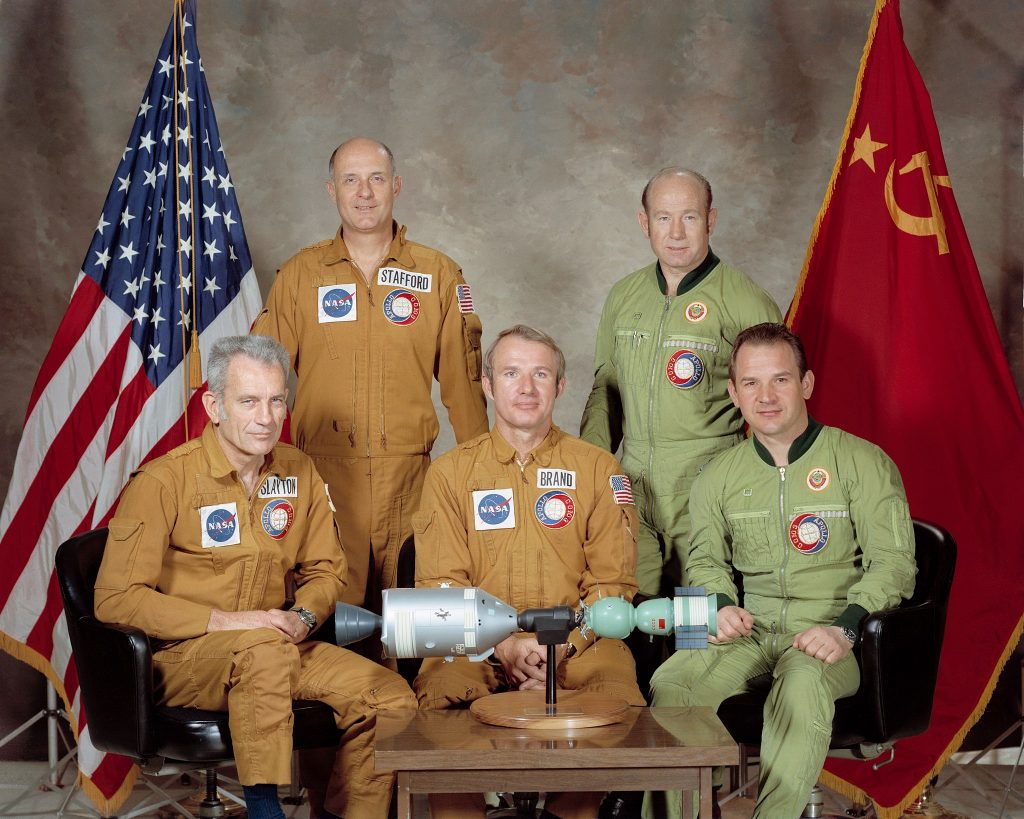 Leonov was not only a pilot and a cosmonaut, but also an artist, author and inventor. He painted over 200 paintings and published several space books and memoirs. Alexei Leonov passed away on October 11th 2019, age 85.

If you enjoyed this post, check out the following WonderDome inflatable planetarium Blog posts

📖 The man who fell from the sky: Vladimir Komarov and the first space disaster