Today, on Monday 14th, astronomers announced the discovery of a “biosignature” gas phosphine in the atmosphere of Venus. What does this discovery mean? Can there be life in this rather hellish place after all? This is what we know so far.

Venus: life or no life?

Venus, with its bone-crushing atmospheric pressures, melting temperatures and poisonous environment, is not the first place where you would go looking for life. Nevertheless, for many years astronomers have speculated whether life on Venus could have existed in the past. Perhaps, although our neighbour planet is not life-friendly today, early in its history it was cooler and wetter. If that was the case, life could have originated on the surface and then, as the greenhouse effect kicked in, moved upwards, to the “milder” altitudes of 50-60 km. But is there any chance it is still up there today?

If some form of life have originated on Venus and survived until now, it should be life very different from anything we are familiar with. So it is only fitting that the biosignature that raised today’s speculations about green men,called phosphine (PH3), is a gas poisonous to every oxygen-dependent life form on our planet.

Phosphine in the Earth’s atmosphere 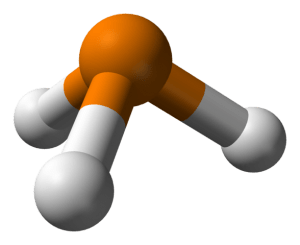 We must point out that the Earth’s atmosphere DOES contain phosphine, but only a trace amount of it, and its presence is firmly associated with LIFE. A small part of the atmospheric phosphine comes from human activity, mainly agriculture. But the main source of the gas is microbes that live in oxygen-free environments, such as wetlands or animal guts. (Although to be absolutely honest we don’t know exactly which anaerobic microbes produce phosphine on Earth. Or how.)

Phosphine as a biosignature

We can assume that if anaerobic life was to develop on a rocky oxygen-free planet, it would have left a phosphine footprint too. Maybe even big enough for us to detect with our telescopes!

In 2019 a group of scientists from the Massachusetts Institute of Technology published a paper in which they proposed exactly that, to look for phosphine as an indicator of life on a planet. Unlike oxygen, that is a signature of life here on Earth, but can also be produced by other processes, phosphine and its presence in a planet’s atmosphere (in big enough quantities) suggests one explanation – life!

The work that resulted in today’s publication, started back in 2016. In 2017 Prof Jane Greaves and her team observed Venus’s atmosphere with the Hawaiian James Clerk Maxwell submillimetre-wavelength telescope (JCMT). The observers detected – for the first time ever – phosphine in the clouds of Venus. The follow-up observations in 2019 with ALMA Radio Observatory in Chile confirmed their initial findings. It was, no mistake, phosphine. Moreover, its abundances – 20 molecules per billion particles of other elements – suggested that something exciting was going on. The team spent over a year doing calculations and ruling out all the possible processes that could have produced phosphine in quantities the team observed. Chemical reactions under the Sun’s UV light, spontaneous reactions in the clouds, reaction in the rocks under the surface, lightning, even phosphine brought by the meteorites – everything scientists could think of was considered, numerically evaluated and ruled out. It was something else.

So there are two possible explanations left. Either some unknown chemistry is going on in the atmosphere of Venus or this phosphine is produced by life.

More research, more observations and, ultimately, a dedicated mission to Venus will be required to solve this mystery. And, who knows, maybe one day- in the clouds of Venus, many million miles from Earth- we will find the first extraterrestrial life.